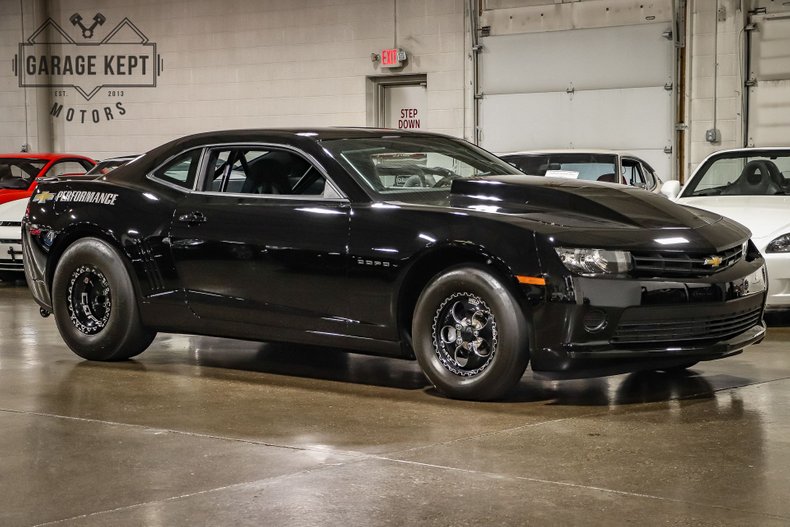 As most Camaro enthusiasts know, back in the late 60's a few Chevrolet Dealerships figured out a way to order Camaros using the Central Office Production Order (COPO) route rather than the standard and more familiar, Regular Production Option (RPO). Years later Chevrolet began to produce the COPO Camaro as a very limited production race car, which is not street legal. A number of engine options were available to customers. The car came with full NHRA approved roll cages, bucket seats, special gauges, and a racing shifter among other features. It was rumored that the 2015 model year COPO Camaro would be the last year. That was not the case. Regardless, the COPO Camaro cars were built to be contenders in the NHRA Stock Eliminator, and Super Stock classes. COPOs were optioned before being built, and thanks to many options, each of the 69 cars built for 2015 is unique.

Offered here is a COPO Camaro that wears serial number 15 of 2015. The car has never been raced, and was delivered new with two engines. The 350ci V8 with a 2.9L Whipple Supercharger strapped to the top, and a 427ci V8, which remains in a crate directly from Chevy Performance. Finished in black, this is a menacing looking car. Since it has never been raced, and was part of a private collection, the car is in very nice condition. No frills Gloss Black paint does the job of making the car look shiny, while the forward rake, large rear tire at the back of the car, and wheelie bars give away that this car is built to go fast. The person who ordered this COPO opted for the Weld Racing wheels wrapped in Hoosier tires which provide a contact patch on the road or the strip.

The factory dashboard, door panels, and steering wheel are a familiar sight, but those items are the few things that you may recognize from a standard showroom Camaro. An NHRA certified roll cage was approved at the time of the production of the car for 8.50 or slower ¼ mile passes. Racing seats, RJS harnesses, auxiliary Auto Meter gauges, and master power switches are a few interior highlights.

Get the best of both worlds with this COPO, since this car has two engines - a more modern Supercharged 350ci V8, and a 427ci V8 which is a nod to the 1969 COPO Camaros. Currently, the Supercharged 350ci V8 resides under the hood of the car, while a numbers matching 427ci V8, which is crated directly from Chevy Performance, also comes with the car. The transmission is a 3 Speed ATI transmission. A quick look at the 350ci V8 engine that sits just below the carbon fiber hood reveals that there is a 2.9 liter Whipple Supercharger strapped to the top of the engine.
COPO Camaros with similar specs have been known to run in the 9 second range in the quarter mile, so unless you're an experienced drag racer this car may be a bit of a handful for you. Since there were only 69 made each year, these COPOs are likely to become collector vehicles. This car is specced nicely and has not been raced, so it is a great example of a COPO which can be used on the strip, or added to a collection. Please call if interested or e-mail with specific questions. Thanks for looking.