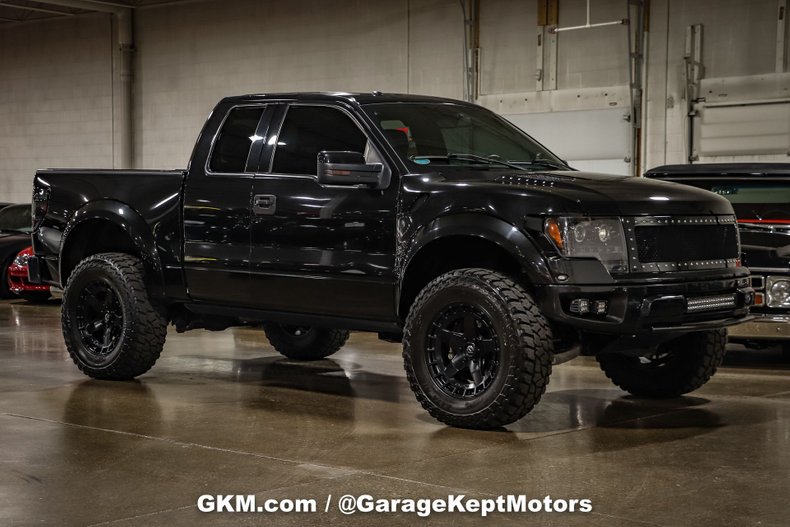 Featured here for sale is Ford's off-road superhero the 2010 Ford F150 Raptor. From the factory, these are highly capable off-road trucks, however this one has a number of upgrades that take it to another level of performance!

This truck is clean as the photos indicate. Giving this truck a bit more of a sinister look is the tuxedo black metallic paint. Custom front and rear bumpers have been added and outfitted with Rigid LED lights. A mesh custom front grille matches the mesh in the port in the hood. This truck features a factory power sunroof. With an enhanced lift, a set of AMP power side steps were added to aid in climbing in and out of this truck. A Bedlocker power rear tonneau cover was added, and the rear taillights were upgraded to LED light housings.

The cabin has been very well cared for, and being a Raptor is nicely appointed. The black leather interior and carpet show nicely. The leather-wrapped steering wheel features controls for options like media or cruise control, and the dash is outfitted with the Raptor-specific SVT instrumentation. Other options include power seats, power windows and locks, air conditioning, a Sony stereo and navigation system, an integrated trailer brake, adjustable pedals, and a rearview camera. The center console features off-road driving mode controls and button-activated descent control.

Under the hood is the optional 6.2 V8 which from the factory was rated at 411hp and 434 lb-ft of torque. However, the output of this motor was further elevated by the following upgrades: Whipple supercharger, Kooks headers, and a full Roush exhaust. The engine compartment is clean and has been well-maintained.

This truck in all black has a really menacing look to it, which seems appropriate for a truck named the Raptor. This is a dynamic high-performance truck ready to take you on your next adventure off-road, or just taming the local roads on your daily commute. Please call if interested or e-mail with specific questions. Thanks for looking.