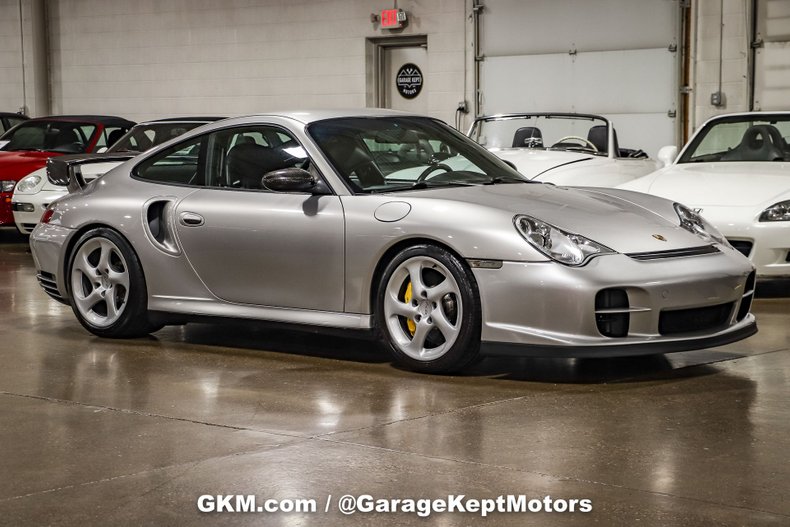 Developed as a high-performance, track-focused sports car, the Porsche 911 GT2 was built out of an order to meet homologation requirements for GT2 class racing. Officially designated as Series Grand Touring Cars, the GT2 class of racing involves vehicles that are based on road car designs.

How loosely based on road car designs is debatable. The GT2 is a serious machine. Journalists have called the 996 GT2; maximum strength Porsche, a missile, possibly evil, and a politically incorrect screamer, among other things. Automotive journalists who test performance cars often using words like that to describe a car, surely means that the average Joe would use much stronger words. Oh to be a “fly on the wall” as people experience the raw power, and ability that the GT2 possesses!

Highlighted here is a 2002 Porsche 911 GT2. Presented in Arctic Silver Metallic paint, this car may look a little more docile compared to say a Guards Red or Speed Yellow GT2, but make no mistake it's all the same under the paint! This GT2 has a few simple aftermarket exterior parts in the form of carbon fiber mirror housings and a carbon fiber rear spoiler. Otherwise the small styling cues that differ from a “regular” Turbo are the front bumper, rear spoiler, and the badging. Even the hollow spoke 'Turbo Twist' wheels are the same. The paint is even and glossy throughout, and we see that the clearcoat on the carbon fiber mirror housings is beginning to show some age.

Powering this sportscar is a twin-turbocharged 3.6L H6, paired with a 6-speed manual transmission. Slightly more boost is produced by the GT2's turbos which helps the engine to produce approximately 456 horsepower. The “regular” Turbo produces 415. Unlike the “regular” Turbo 911, the GT2 is strictly rear wheel drive and has no “nannies” or electronic assist features. It's just driver and car. If you're up for the challenge of controlling this car whilst going around a racetrack, be sure that you're at the top of your game, as we understand that controlling all that power is a challenge.

Once seated in one of the seats, it is easy to see that this car means business. For starters, the seats are a thin shell with a thin bit of leather over top, and a factory installed roll cage can be seen criss-crossing behind you. Silver face gauges, a three-spoke steering wheel with carbon fiber sections on the rim, alcantara headliner, drilled aluminum pedals, carbon fiber gear lever, and even a radio are other interior highlights. Included in the sale of this Porsche are the original owner's manual as well as maintenance documentation.

Any collectors or automotive enthusiasts seeking what could be called a road worthy racecar? The GT2 is usable on the street and can be a terror at track days. This GT2 is sure to set you apart from the rest, and if the many automotive journalists who have driven GT2's are correct, this car may have you (and your passengers) screaming expletives. Chances are you'll go back for more. Please call if interested or e-mail with specific questions. Thank you for looking.