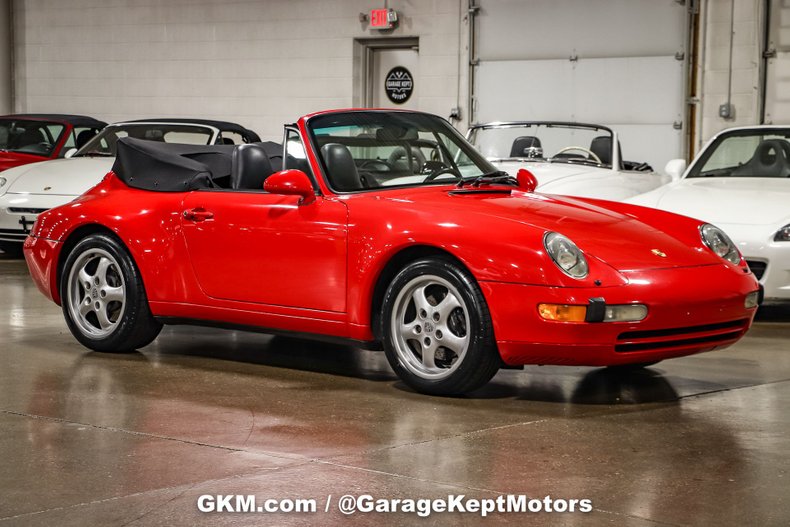 Internally referred to as the 993 by Porsche, the Porsche 911 models manufactured and sold in the United States from model years 1995 through 1998 marked the end of air-cooled 911 models. With advancements not only technical in nature but also from a visual perspective, the 993 created a more civilized vehicle overall, and provided an improved driving experience. With the 993 generation, the 911 lost the harder edges and squared off details as seen on previous generations. The result was a smooth car that had handsome looks. The appeal for the 911 was never lost, especially since the 993 generation retained the air-cooled engine.

Shown here is a 1995 Porsche 911 Carrera Cabriolet. Presented in many Porsche enthusiasts favorite color, albeit the most well known color on Porsche's color palette, Guards Red. (Indischrot in German.) A black interior and black top paired with the Guards Red paint makes for a stunning look. The paint shows well with nice gloss and rich color. What 911 doesn't look good with a set of 5 spoke wheels, especially the factory items? This 993 features metallic silver 17” wheels which are wrapped in Continental tires. The soft top is a power unit to make raising and lowering the top easier on vehicle occupants. Another exterior feature worth mentioning is the power rear spoiler which can be operated manually with a switch inside the car, or it extends automatically at a pre-set speed.

This 911 Carrera is powered by a naturally aspirated 272 horsepower 3.6L H6 that has been paired with a 6-speed manual Transmission. The odometer shows 45k miles, which we would consider pretty low miles for a 993 generation 911. On this particular 911 engine power is sent to the rear wheels, and reaching 60 mph can be done in just a few ticks over 5 seconds. Doing so with the top down is a great feeling, maybe we should describe it as exhilarating. Porsche's ad for the 993 cabriolet described it as “so exhilarating that a constant supply of oxygen comes standard.”

The black interior is pretty standard 911. Leather bucket seats show well and compliment the black dash and soft top. Speaking of the dashboard, the basic layout is pretty close to unchanged since the '60's. Both bucket seats do have slight evidence of wear on the leather if we look closely. A previous owner has updated the stereo with an aftermarket unit from Alpine which includes a CD changer in the luggage compartment. Included in the sale is a tool kit as well as battery maintainer.

The Porsche 911 is an automotive icon in its own right, and this Cabriolet is a gorgeous example. This particular car is one last of the air cooled cabriolets, so this is a special car. Not to mention the lower miles, 3.6 liter flat-6, and 6 speed manual transmission. Very rarely is a Porsche a bad purchase decision, and this car is most definitely a car to put on your purchase consideration list. Please call if interested or e-mail with specific questions. Thank you for looking.