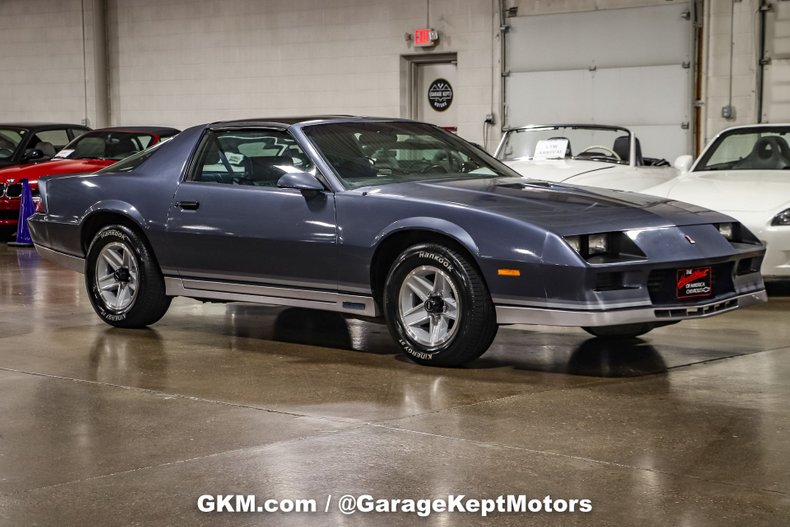 As a response to the Ford Mustang, Chevrolet came up with their own pony car, the Camaro. The Camaro first went on sale on September 29, 1966, for the 1967 model year. It shared its platform and major components with the Firebird, produced under General Motors' Pontiac division that was also introduced for 1967. Four distinct generations of the Camaro were developed before production ended in 2002. The nameplate was revived on a concept car that evolved into the fifth-generation Camaro with production that started on March 16, 2009.

The third-generation Camaro was produced from 1981 (for the 1982 model year) until 1992. These were the first Camaros to offer modern fuel injection, Turbo Hydramatic 700R4 four-speed automatic transmission, five-speed manual transmissions, 14, 15, or 16-inch wheels, a standard OHV 4-cylinder engine, and hatchback bodies. The IROC-Z was introduced in 1985 and continued through 1990. These third generation Camaros were nearly 500 pounds lighter than the second-generation models.

Presented for sale is a 1984 Chevrolet Camaro Z28. Sporting a blue over blue color combination, this Camaro is a true icon of the 80s. Noted as having only 3 previous owners and 10k miles, it is evident that this vehicle has been someone's pride and joy. With minute details like the Z28 stripes on the hood and two-tone strip along the bottom edge of the body, this Camaro is a subtle performance machine. There are a couple very minimal signs of age on the exterior body but would be hard to locate without a trained eye. Powered by a 5.0L V8 and 5-speed manual transmission, this Camaro has only just begun its life and would bring any owner a ton of driving joy.

For the interior, all passengers are met with Camaro branded front bucket seats and a rear fold-down bench that when folded down creates an expansive cargo area for any mid-sized vehicle. With options like power windows, stereo with cassette and T-tops, there is truly no reason not to get out and enjoy this Z28. Overall, the interior is very clean except for a small tear on the lower driver's door panel. It is also noted that the original build sheet is included in the sale.

As the front license plate declares, Chevrolet and the Camaro Z28 provide a heartbeat to America and the automotive industry. Being a direct competitor for Ford's Mustang, it could be said that the Camaro is just as popular and well-known as any of the top pony cars. With a hearty heritage and a production line that continues today, it is easy to understand why many collectors cherish their Camaros and this is the perfect change for you to add one to your own collection. We encourage you to check out this Z28 for your next purchase. Please call if interested or e-mail with specific questions. Thanks for looking.