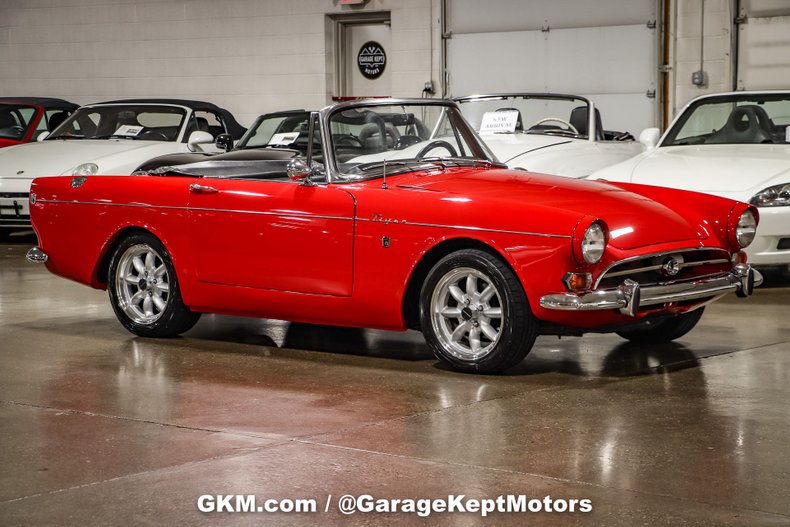 The early to mid-sixties seemed to be the years of the tiger in the automotive industry. Esso began using an ad campaign which declared that by using Esso gasoline, consumers could put a tiger in their tank. The likeness of a tiger was also added to Esso's marketing efforts. Pontiac also began using a tiger in GTO advertising, declaring that, “There is a Live One Under the Hood.” With the introduction of the Pontiac GTO came another automotive related Tiger brand, which has lasted generations. The Uniroyal Tiger Paw tire line was introduced. Right along with all that tiger nostalgia is the little sports car from Sunbeam, and you guessed it, the car is called the Tiger!

As a way to boost Sunbeam sales, a US West Coast Sales Manager came up with the idea of shoehorning a V8 under the hood of the Alpine to eventually create the Tiger. The story goes that he had a service manager carrying a yardstick around measuring V8 engines from many manufacturers before the Ford 260 ci V8 was deemed okay to squeeze into the engine bay. Racing driver Ken Miles was said to have offered some input to the Tiger project, and Carroll Shelby played a huge role in the development of the car. Good 'ol Shel was even paid a royalty for each vehicle built, after his company was not awarded the contract to build them.

Bright Red paint is perfect for a little sports car, especially a car that was built to perform. You can't miss this car as it's cruising down the road. The low slung stance gives the car an aggressive look, and as soon as the exhaust note is heard, it's clear that this car has a little extra power under the hood. The paint color, called Carnival Red by Sunbeam, looks to be the original color, although the trim/data tag which is typically under the hood, is not there. The paint and body present well with glossy and even paint, proper trim, and nice panel fitment. The chrome on the front and rear bumpers have some micro-scratching/swirls and the rubber trim at the tops of the doors doesn't quite fit right. As a MK1A, this beautiful example has the correct rounded door corners and rounded boot and bonnet corners. The MK2 cars went to squared off doors, bonnet, and boot. Another easy identifier to differentiate a MK1A and MK2, is that the MK1A cars, like this one, had a vinyl top boot rather than a metal cover.

The heart of this car is a 260ci V8 sourced from Ford. A manual transmission handles gear selection. A tidy engine bay is a plus, and allows us to easily see the finned Ford Racing valve covers, and that an aluminum radiator has been added. A little extra power has been eeked out of the 260ci V8 thanks to the Edelbrock intake manifold and a Holley 4 barrel carburetor. It's a similar setup to the Los Angeles Tigers kit which was offered for those hoping to modify their cars a little bit. It sounds a bit tacky to say it, but this Tiger has a nice roar! A close look at our photos of the engine bay show the correct markings to look for when considering the purchase of a Tiger, which are a portion of proving that a vehicle is indeed a Tiger. The first bit of evidence to look for is in the engine bay, on the passenger's side fender well, where a shovel-shaped depression was added by Jensen during the assembly process for alternator clearance. The holes used by the factory for mounting the tools that were used to re-shape the fender well are also visible in our photos. Also, additional steel can be seen on the strut towers, which were also added by Jensen during the production process. Other items to look for in order to tell a Tiger from an Alpine are the battery mounting point being moved from the area behind the rear seat to the trunk (to allow for exhaust clearance), and underbody bracing at the middle of the car having been trimmed, hammered, and welded shut.

The likeness of a Tiger seemed to be popular in mid-sixties automotive marketing. Companies told consumers that they could put a tiger in their tank, that a tiger was under the hood, and that consumers should get Tiger Paws not tires. Here at Garage Kept Motors we would like to humbly suggest that you put this gorgeous Sunbeam Tiger in your garage. Please call if interested or e-mail with specific questions. Thanks for looking.