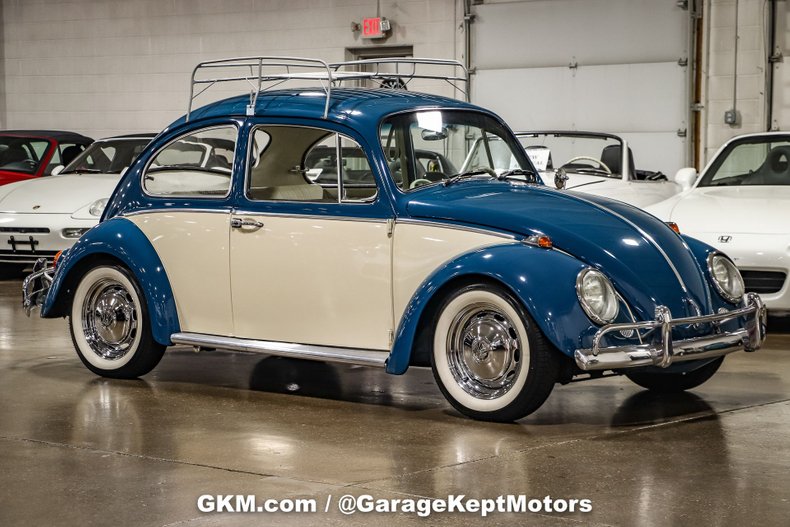 One could say that the Volkswagen Beetle is as much an automotive icon as the Ford Model T. Initially created with similar ideals as the Model T, the Volkswagen Beetle was formulated with the objective of being a cheap, simple car that could be mass-produced for the German population and beyond. Although there are no official generations for the Beetle, Volkswagen changed and improved upon the initial design and performance every year. It is noted that the 1966 model year was significant as it provided an optional 1300cc 50 hp engine in lieu of the previous 1200cc engine that had been the only offering available in the Beetle since 1954.

Displayed here is a 1966 Volkswagen Beetle. There is an innate charm about this particular Beetle, thanks to a sharp two-tone blue and white paint scheme with chrome wheels. Strap a surfboard to the roof rack and this Beetle will fit right in at the beach. The two tone paint scheme was not how this car would've left the factory, but it's certainly hard to miss, and has been carried out professionally. The paint shines nicely, as does the chrome bumpers and trim strips on the side of the car. A chrome rear vent cover has been added just above the 1300 logo on the rear decklid. Wide white tires are wrapped around chrome wheels that have flat hubcaps - a new style for the '66 model year.

Anyone who has driven an earlier Beetle will feel right at home thanks to a very familiar interior layout. And we have to say that the interior in this car is beautiful. All the details are there, and it's obvious that the interior was professionally restored. A simple speedometer, large steering wheel, simple seats, and a radio are a staple among Beetle interior accessories. Added in '66 was “basket weave” vinyl seating surfaces, which in this Beetle are in great condition. The horn ring made an appearance again for '66 after being absent for a few model years prior. This Beetle has seat belts, although surprisingly those would have been an option in '66. The interior color in this particular Beetle matches the Ivory paint accents on the car, and pairs so nicely with the blue paint. The interior is in beautiful condition from the carpet to the head liner.

The 1300cc engine is still a gas sipper, despite gaining a few cc's and a few more horsepower. The combination of the 1300 and the 4-speed manual transmission makes this car a joy to drive. A slight whistle can be heard from the “pea-shooter” exhaust tips, a sound that is synonymous with the earlier Beetles.

Many folks who own Beetles have really been “bitten” by the bug, and own multiple Beetles. This particular car is certainly a Beetle to consider adding to your collection, whether it has a Beetle garage mate or not. Please call if interested or email with specific questions. Thank you for looking.