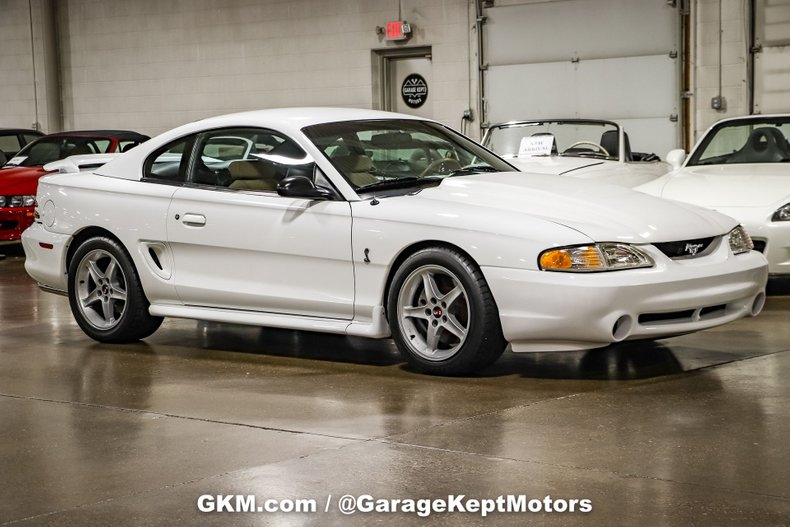 In the mid-90's Mustang owners demanded something more performance oriented and in 1995 the SVT Engineers responded with the Cobra “R”. With the unexpected success of the 1993 R's, SVT engineers developed an even more powerful R-model based on the “SN95” platform SVT Cobra. The “R” series stands for racing, and is a no- nonsense powerhouse engine, bolted to a stripped-down chassis. SVT only produced 250 race ready Cobra “R” models in 1995, with only holders of valid NHRA or SCCA racing licenses being able to obtain one of these cars as new.

Garage Kept Motors is very excited to offer up one of the special 250 1995 model year cars for sale. This “R” model is well preserved with only 7,000 original miles on the odometer. All 250 SVT Cobra R's came painted in white with a saddle interior and the only “R” emblems on the car were on the center caps of the five-spoke wheels. The paint on this car is well preserved and the factory finish shines brightly. The factory external changes included the installation of a fiberglass hood tall enough to clear the engine and induction system. Also, the fog lights were omitted with the light buckets left open and connected to ducts to channel cool air to the front brakes.

The interior on this Cobra presents very well although it looks pretty spartan. Keep in mind, weight-savings was targeted, so there was no back seat, sound insulation, radio, power windows, power seats, power mirrors or even air-conditioning. Because SVT assumed that most Cobra R buyers would install a set of racing seats, the cars came from the factory with the cloth seats from the base Mustang as pictured here. Interestingly enough, with the addition of the new race ready parts, and the 351 motor the resulting weight reduction came out to about 200 lbs. when the combination was assembled.

Underneath the car is well preserved and presents very much as it did when it left the dealership, with many of the factory markings and decals from assembly. The suspension is beefed up from the factory with progressive rate Eibach coil springs, adjustable Koni struts and a large 30-millimeter anti-roll bar up front. Out back the Cobra R has linear rate Eibach coil springs, Koni shocks and a 27-millimeter anti-roll bar. Wide 17×9-inch five spoke aluminum wheels wrapped with ultra-sticky 255/45ZR17 BF Goodrich Comp T/A tires help the car grip the tarmac. A Kevlar 20 U.S. gallons (76 L) fuel tank specific for racing, replaces the smaller stock steel unit on base cars, which gives the R additional fuel capacity. Braking is provided by Power Assist, four-wheel brakes with anti-lock, with 13 inch vented cast-iron disc, twin-piston caliper up front with 11.65 inch vented cast-iron discs with single-piston calipers in the rear.

Under the hood is extremely clean and well preserved. SVT engineers replaced the Cobra's 5.0-liter with a special version of Ford's 351 cubic-inch Windsor small-block, re-engineered to produce 300 horsepower and 365 foot-pounds of torque. To handle the torque of the more powerful engine, a Tremec 3550 5-speed manual transmission was installed. The 5-speed manual transmission is connected to a limited slip rear axle with a 3.27:1 ratio. The motor purrs through a factory dual exhaust with dual high flow catalytic converters, an X-pipe, and factory installed Flowmaster mufflers.

SVT Cobra R's are very collectible, and without a doubt some of the most valuable of this generation of Mustangs thanks to low production. As these were intended as race vehicles it will be difficult to find one that is as unmolested and original as this example featured here. Please call if interested or e-mail with questions. Thank you for looking.