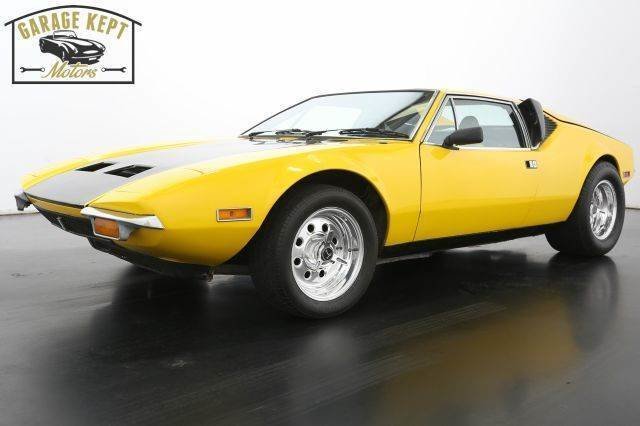 Offered here is a 1972 De Tomaso Pantera in original yellow to be either driven & enjoyed, or restored. This model was the last of the small chrome split bumpers, and much more desired than the hideous black rubber versions which followed on the “L” in late 1972 and beyond. A 3-owner car, she was set up and used early on as a gentleman racer, but never wrecked. No roll cage was installed, but the seats were replaced with racing tubs/safety harnesses, and the factory hood substituted with carbon fiber. The air conditioning components are removed, but with the car.The monocoque body is very solid, with the exception of a few repairable rust spots; one on the passenger A pillar, another inside behind the passenger front wheel well, and 2 at the front suspension base welds(see images). The only damage seen from below are some folded over weld seams from jacking the car up without thinking. A 15 year old repaint can only be described as “amateur”, making the car a good looking 20 footer, and an excellent candidate for a full strip and refinish. Mechanically the car is in great shape, and is a pure pleasure to drive. New Wilwood brake pads all around provide exceptional stopping power. As for going power, the original 351C has been completely rebuilt into a full roller, with the most aggressive Ford factory race cam available, and has around 300 miles on it since. It is estimated by Ford specs to produce over 500 horsepower, and it sounds to be all of that through FlowMaster exhaust. The new clutch compliments the smooth shifting linkage is into all 5 ZF gears. The radiator & fans are supplemented with a recommended electric pump, helping the engine's water pump do its job, and keeping the temperature at a steady 190°. Ultra polished aluminum faux knock-off wheels carry over-sized BF Goodrich Euro TA's giving an impressive visage from behind. These are long wearing tires with many miles left, however, there are certainly “stickier” tires available for someone planning to enjoy some corner g's.As Jay Leno stated, the Pantera “is the most misunderstood and undervalued supercars of the 70's”. Recent sales activity supports that opinion, as values have been climbing substantially these past 2 years, and look to continue.