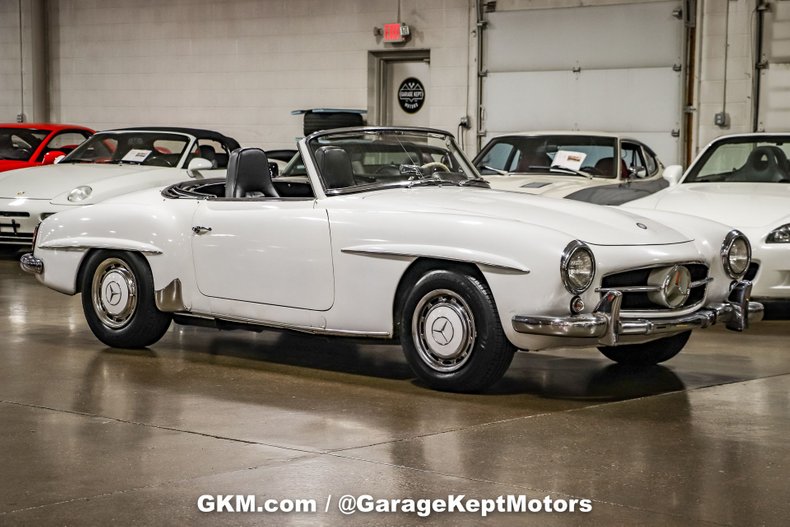 And now for something completely different.
At first glance, this car looks like a pretty standard 190SL roadster, until you really start taking in the details. There are hints throughout that this car is not a standard 190SL - this car is the John Daly to Tom Kite of the 190 world. Think that's an odd analogy? Keep reading.

The first interesting aspect that we should mention is that the car has been repainted in white pearl metallic which is obviously a different formula for the standard white paint used by Mercedes Benz would have used at the time. The car actually rolled out of the factory wearing Silvergrey metallic paint. The hood has a number of carefully placed louvers to assist in extracting hot air from the engine bay. Other than those small details, the exterior is in nice presentable condition. The paint is even and glossy throughout, despite some knicks and chips which are visible in our photos. Chrome trim is in nice condition, lenses show well, and the correct wheels are on the car, complete with paint matched centers. The top does show some age, but this is a top down car anyway! Dual exhaust coming out of the back of the car is a slight giveaway that there may be a different power plant under the hood.

A Porsche somewhere gave up its “tombstone” seats so that this unique Benz had some more supportive seats than the original Mercedes Benz items. Original Mercedes Benz gauges, steering wheel, and climate control levers remain, however there are a few items inside the car that don't belong. The first item being a kill switch under the dash, but the really odd item is the white shift knob capped Hurst shifter which is in easy reach of the driver.

A look under the hood of this unique 190SL may have Mercedes Benz purists uttering “ach du lieber”! The current look of the engine bay sure is a stark difference from the slightly more refined looking Mercedes Benz engine, which had a smooth aluminum valve cover, an aluminum intake manifold, and a pair of Solex carburetors off to the side. Not to mention that there are now a few more cylinders to feed. Rather than the 104 horsepower 1.9 Liter original Benz engine, this car now has a 283ci V8 which is fuel injected. The 283 V8 was factory rated at 315 horsepower, so yes folks, that is almost exactly three times the horsepower. Since that 283 was planted in a small 190SL, this car gets up and goes! Back to the PGA golfers analogy, this car now has raw power, and is much louder, which fits with John Daly, rather than the original refinement, innovation, and precision it once had like Tom Kite. This car can party.

So would you consider this interesting specimen a “Corbenz”, or maybe a “Mervette”? We could always give it a more Bavarian name of the “190 Stachelrochen” (Stingray). The new owner can decide what to call it, maybe a discussion over some beer and pretzels is in order. We can't seem to agree on one name here at GKM. As we said, this is something completely different, but having been professionally built, it works.

Please call if interested or e-mail with specific questions. Thank you for looking.