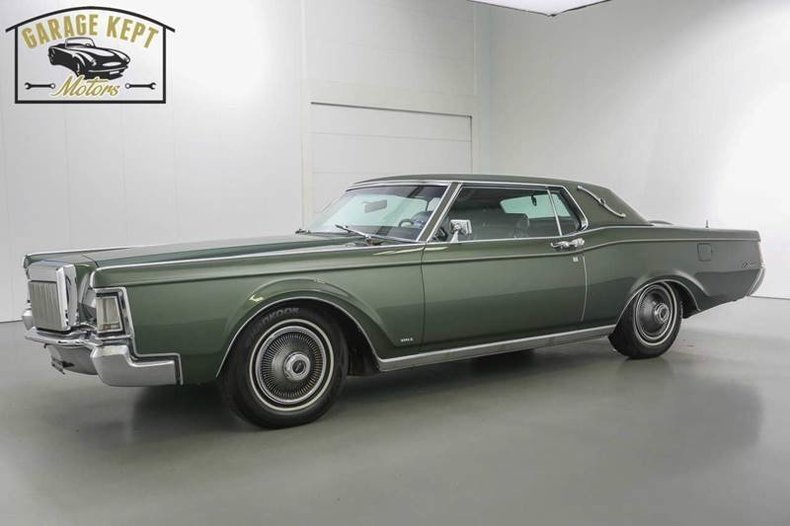 The first Mark was a customized version of the Lincoln Zephyr convertible built for the personal use of Edsel Ford. Due to the reaction caused in Palm Beach, it became a limited production model in 1940, called the Mark I. The Mark II was a 2 year production of 3,000 cars on which Ford lost $1,000 on each car sold. The Mark name was also used in the late 60's with the word Continental for the large Lincoln as a trim package. Once the Thunderbird went to a four-seat model, it outsold the 2 seat versions and the concept of a "personal luxury" car was born. Lee Iacocca, after his success with the Mustang, decided that Lincoln should once again have a "personal luxury car." While on a trip to Europe, Iacocca came up with the idea of using a Rolls type grill and using a Continental type bulge on the trunk. The design was confirmed when Henry Ford II saw the clay model and said he it liked it so much, he wished he could take it home with him. The car was actually built on the Thunderbird four-door frame with a longer wheel base rather than the two-door Thunderbird, although it shared cowls, windshields, roof panels and door glass.The Mark III was introduced on April 5, 1968 as a 1969 model with a starting price of $6,585 but most, as optioned, sold around $9500. It was the first car to be offered with Sure-Track brake system, the first anti skid breaking system.This car was the very first Mark III in Grand Rapids, Michigan. It was bought from Pfeifer on a hand shake by industrialist Leslie Tassel, the owner of Lescoa. At the time Lescoa manufactured parts for every car built in America. To say that he was flamboyant or interesting character was an understatement. His personality was infused into this car as he had a love of big game hunting and African animals. Please see the picture of Mr. Tassel with an actual Cheetah in the car flanked by a Roman chariot pulled by his zebras. He customized the car with a full Leopard interior and personally hand cast the Lion door handles. He also adorned the outside with models of African animals. In the 1990s he gave the car to his daughter and son in law. They removed the outside animal decorations and had the car repainted in its original color by Pfeiffer. They replaced the leopard seat covers but left the Leopard accents.The car has travelled less than 28,000 miles since the day Tassel took it home. It looks like it just rolled off the showroom floor and is a pleasure to drive as well. The mechanicals have been gone through and it is a privilege for Garage Kept Motors to now be offering it for sale. You will be hard pressed to find a one-owner Mark III in this excellent condition with one-owner and a one-of-a-kind history. Call or e-mail if interested. Thank you for looking.