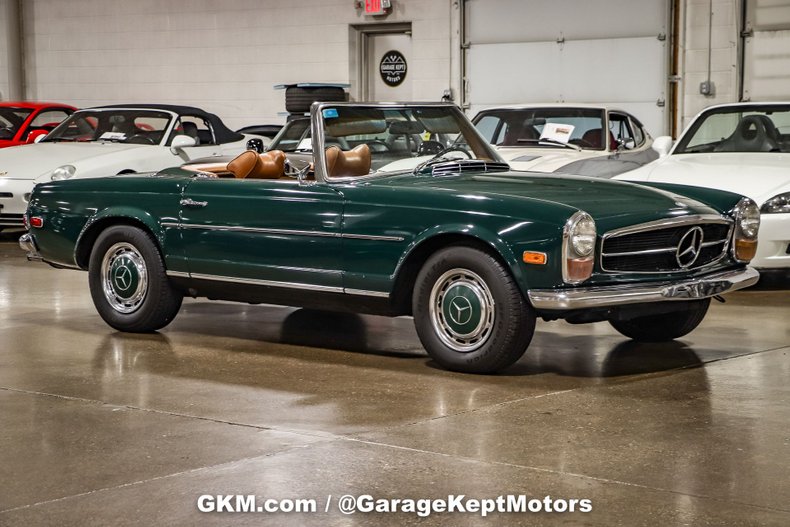 Based on Mercedes-Benz's W113 model line, the 280SL is a two-seat roadster/coupe that has become a staple of the three-pointed star. Introduced in December 1967 and continuing production through February 23, 1971, the 280SL was brought into the Mercedes family. Although not initially produced for the North American market, the 280SL was given to the states for enthusiasts to enjoy here. Noted with subtle differences, the most obvious being the distinctive “sealed beam” bulb headlights that were required in the US, this Mercedes line primarily grew in popularity among the gray-market. Other differences that North American models include are imperial gauges, chrome bumper guards, side reflectors, lower rear-axle ratios for faster acceleration yet lower top speeds, and no “single-side” parking lights. In addition to these modifications, the North American 280SL models included popular options like automatic transmissions, air conditioning, and white wall tires.

Displayed here is a 1970 Mercedes-Benz 280SL that has been imported directly from France and was received in Las Vegas. Noted as retaining the original factory correct color of Moss Green and a new interior that was replaced in the early 2000s, this Mercedes is a poster child for the classic roadster. Powered by a 2.8L/180hp Bosch FI inline 6-cylinder engine and 4-speed manual transmission, this Mercedes could be considered a sweetheart of the road. Displaying 20k miles on the rebuilt engine and front disc brakes with new tires, we can only imagine how smooth this roadster would cruise. The previous owner also notes that this 280SL has also been fully serviced at a German Automotive Service. Records provided upon request.

Noted as a desired “Pagoda” model, which is the nickname given to the 280SL models due to their unique concave roof shapes, this vehicle can be considered quite attractive in today's collector car market. With fellow famous owners like Charlton Heston, Walt Disney, Stirling Moss, Colin Powell and John Travolta, you can definitely agree that the Mercedes-Benz 280SL is a roadster that has stood the test of time. Exhibiting timeless, graceful styling, spirited performance and handling, and build quality and reliability that is second to none, the 280SL is a fabulous vehicle to add to any collection. Please call if interested or e-mail with specific questions. Thank you for looking.