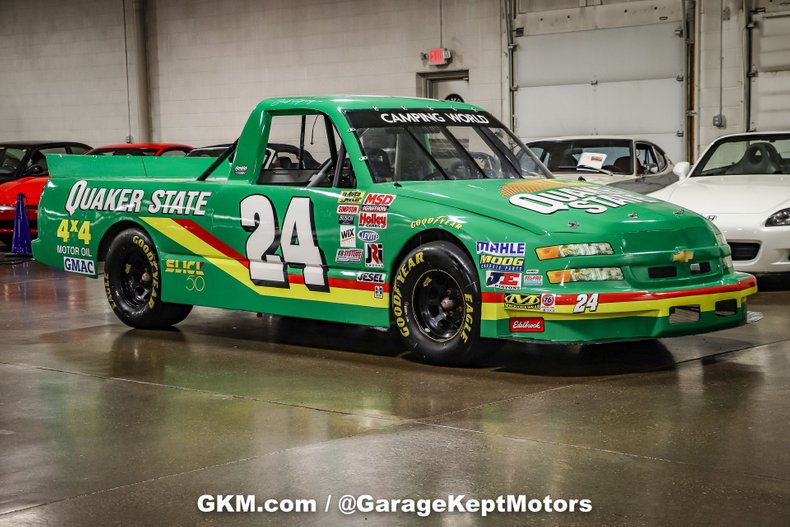 Whether you are a NASCAR fan, racing fan or just a fan of speed, we encourage you to check out this true Camping World Truck Series race truck. Driven by Jack Sprague in 2001, this truck is truly a champion in every right. Raced under the Hendrick Motorsports family name this truck is a real racer and as fast and fun as you can imagine.

The idea of NASCAR's truck series dates back to 1991. As the brainchild of a group of SCORE off-road racers, the truck series was developed to lessen the hazards of desert racing and bring the thrills to the pavement. Four demonstration races were held at Mesa Marin Raceway, Portland Speedway, Saugus Speedway and Tucson Raceway Park, ultimately creating the SuperTruck Series. Tools line Craftsman served as the sponsor of the series on a three-year deal and the series was renamed to the “Craftsman Truck Series” in 1996. The inaugural race, the Skoal Bandit Copper World Classic at Phoenix International Raceway, was held on February 5th and featured an event-record crowd of 38,000 spectators.

Hailing from Spring Lake, Michigan, Jack Sprague began his career racing street stock cars at local short tracks. Sprague started racing in the Trucks' Series first year of competition in 1995. He began the season in the No. 31 Chevrolet Silverado for Griffin Racing, winning the pole at Louisville Speedway. In 1996, he slid over to the No. 24 Quaker State-sponsored truck owner by Hendrick Motorsports, winning his first race at Phoenix, followed by back-to-back victories at Nazareth Speedway and The Milwaukee Mile. Crowned the series champion in 1997 with the No. 24 Quaker State truck under Hendrick Motorsports, it was only the third year of the truck series to be completed. Sprague continued to race under a variety of sponsors and a plethora of vehicles with his final races being noted in 2008.

Hendrick Motorsports is a professional auto racing organization that was founded in 1984 and has the following wins credited to their name; a NASCAR-record 290 Cup Series races, 14 Cup Series owners and drivers' championships, three Truck Series owners and drivers' titles, one Xfinity Series drivers crown, 26 Xfinity Series race wins, 26 Truck Series race wins, and 7 ARCA Racing Series wins. The team has fielded cars in the past for many NASCAR drivers, including Hall of Famers Jeff Gordan, Mark Martin, Terry Labonte, Darrell Waltrip, Benny Parsons, Dale Earnhardt Jr., and 7-time champion Jimmie Johnson, among many, many others. Hendrick Motorsports maintains an in-house engine shop, with the team leasing some of their engines to technical alliance parts JTG Daugherty Racing. At the 2021 Coca-Cola 600, Hendrick became the winningest team in NASCAR Cup Series history when it won its 269th race with the No. 5 driven by Kyle Larson.

There truly is nothing like this No. 24 Quaker State truck that has a winning lineage. Not only was it driven by a trailblazer but also under the winningest team in automotive racing history. For any collector, this is the perfect chance to own a piece of NASCAR history and live out any racing car fan's dream to own their own race car (or truck). We encourage you to check this one out in person. Please call if interested or e-mail with specific questions. Thank you for looking.