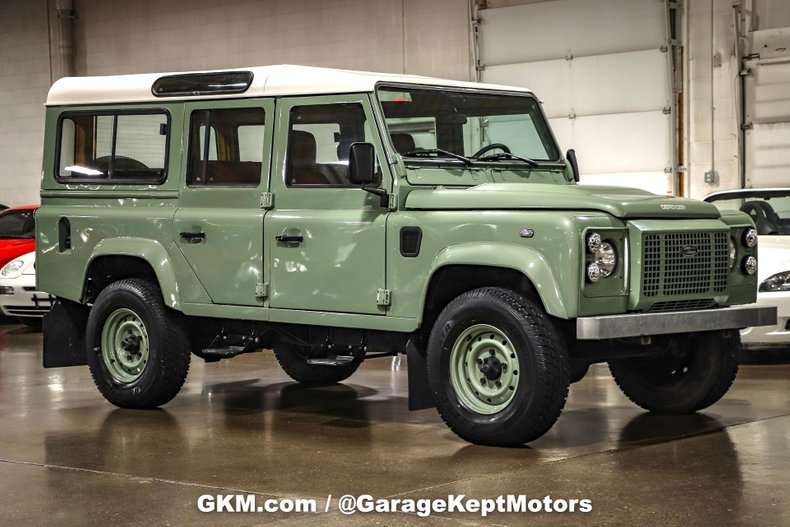 Initially introduced as the Land Rover 110/One Ten, the Land Rover Defender is a series of off-road and pick-up trucks. This vehicle, a British equivalent of the Second World War derived Jeep, was consistently equipped with four-wheel drive and gained a worldwide reputation for ruggedness and versatility. Using a steel ladder chassis and an aluminum alloy bodywork, the Land Rover originally used detuned versions of Rover engines under the hood.

However, the Defender was not a new generation design, it incorporated significant changes, compared to the series Land Rovers, such as adopting coil springs front and rear, as opposed to all leaf springs on the previous models. Coil springs offered both better ride quality and improved axle articulation. Adding a lockable centre differential to the transfer case gave the Defender permanent (on-road) four-wheel-drive capability.

Land Rover debuted the Defender to the North American market in 1993, even though the Range Rover had been sold there since 1987. To comply with the strict United States Department of Transportation regulations, ranging from crash safety to lighting, as well as the very different requirements of American buyers, the North American Specification (NAS) Defenders were extensively modified. These Defenders sported full external roll-cages and larger side-indicators and taillights. All were equipped with the factory-fitted air conditioning system.

Imported from Spain, this Heritage Green Defender 110 has seating for 9 passengers and is ready for any rugged adventure. Noted as having a fresh restoration, and fresh servicing in August 2022 by Arie Nol, this truck stands out amongst any crowd. The Heritage Green paint is a great choice for this Land Rover. It's a classic color and is hard to miss. Thanks to the recent restoration, the paint and body is in great condition. Inside the vehicle is a new interior consisting of seats which were reupholstered in black and a terra cotta hue, and a nubuck headliner.

Powered by a numbers matching 2.5L TDI 4-cylinder and 5 speed manual transmission, this truck comes standard with four wheel drive. Updates to the powertrain also include complete head replacement, new turbo, new waste gate, new thermostat, and new water pump. In addition to the mechanical updates, this truck is also outfitted with LED headlamps and taillights as well as mudflaps for all four wheels.

If you are in the market for a large truck that can conquer any terrain, this Land Rover Defender is perfect for you. With plenty of room for your friends and the standard four-wheel drive, we hope that the next purveyor of this Defender is ready to see the world and tackle any quest. Please call if interested or e-mail with specific questions. Thank you for looking.