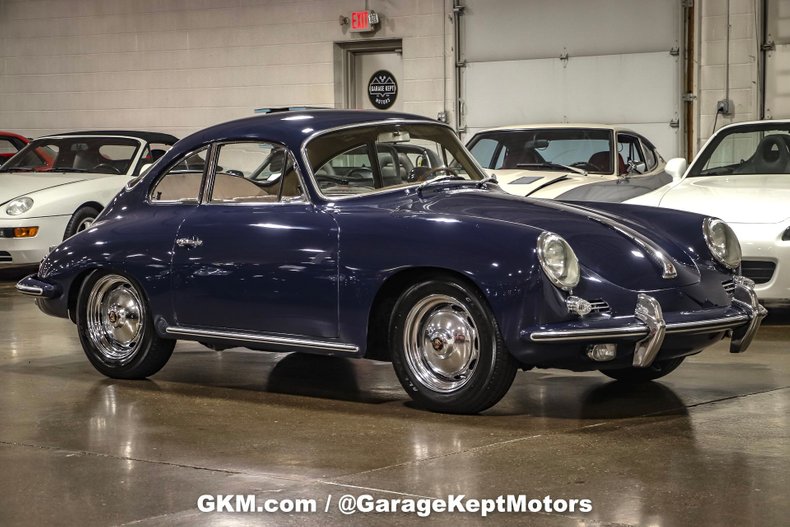 Noted as the first production automobile under the Porsche name, the 356 is a lightweight and nimble-handling, rear-engine, rear-wheel drive, two-door sports car. Available as both a hardtop coupe and as an open configuration, Porsche's 356 included years of innovation contributing to Porsche's motorsports success and popularity.

Replacing the 356A for the 1960 model year, the 356B was a step-up change from the 356A. Aside from a few external changes, the B offered buyers more powerful and flexible engine options which helped highlight the car's excellent chassis and handling dynamics. Porsche's reputation for racing inspired engineering and accessible performance has ensured that many 356Bs have led very active but cherished lifestyles. There are still a number of examples of these vehicles on the open market. The Porsche 356B was available in several different versions including a Coupe, Roadster, Super, Super Roadster, Super 90, and Super 90 Roadster. Even with mixed reviews about the revised front-end styling and raised headlights, the updated appearance did nothing to dampen the enthusiasm for the 356B.

Highlighted here is a 1963 Porsche 356B Super 90. Covered in a gorgeous dark blue paint, this sports car is a handsome sports car. Originating from California, this vehicle is the epitome of Porsche legacy. Under the hood is a 1600cc 4-cylinder engine that has been paired with a 4-speed manual transmission. As part of the Super 90 designation this Porsche features sodium filled valves and twin Solex P40-11 carburetors. This engine is particularly sought after by collectors due to its higher output.

For the interior, the driver and passenger are met with a lush tan interior. Complete with front buckets and smaller rear seats, this sports car is most comfortably a two-seater. Noted with an optional Blaupunkt radio 'Frankfurt De Luxe' combined with front speakers and CD player in the glovebox, this 356 has been updated to be a lovely cruiser. There is some wear to the leather driver's seat but does not appear to hinder the comfort or cause distraction to the driver.

Lovingly observed as the 911's little brother, the Porsche 356B retains quite a bit of its prominence and legacy. This 356B includes a Porsche Certificate of Authenticity as well as many unique features that are known among Porsche models. All-in-all, the 356B solidified Porsche's reputation for building high quality, fun, and quick little sports cars. This vehicle is the perfect opportunity for any car enthusiast to become an owner of one of the world's premier specialist vehicle manufacturers. Please call if interested or e-mail with specific questions. Thank you for looking.