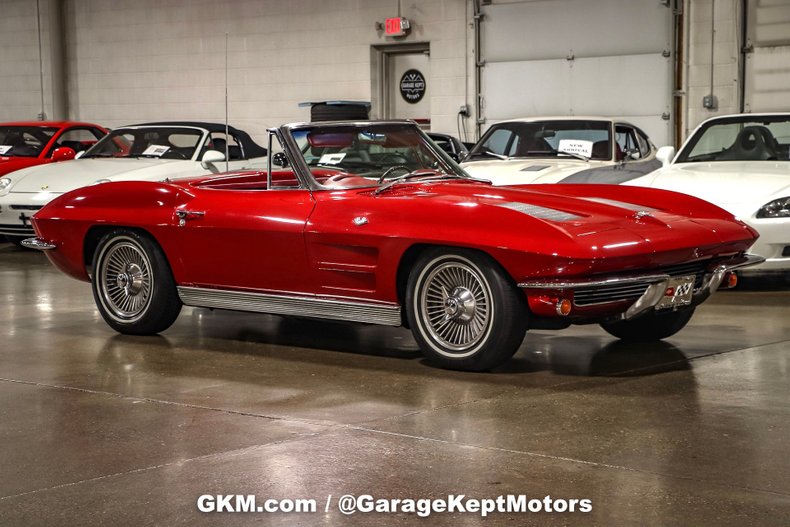 The 1963 model year marked the beginning of the C2 era of the Chevrolet Corvette bringing on an array of technological advancements and improvements that drew nearly as much attention as it had when the Corvette was first introduced in in 1953. Developmental cues came from several GM projects led by now legendary GM designers; Chevy's GM Ed Cole and the Q-Project, famed engineer Zora Arkus-Duntov and his 1959 lightweight, open-wheel, single-seat CERV I concept and GM designer Bill Mitchell's Sting Ray racer. Design cues from all these vehicles would be integrated into the company's experimental design program titled the XP-720. The focus was on improved passenger comfort and luggage space as well as improved driving and handling performance. In short, the XP-720 project was earmarked to deliver superior performance over previous Corvettes. This program represented the final lap in the development that would be the 1963 Corvette Stingray's developmental journey. Notably, the 1963 Stingray was aerodynamically optimized, and the interior got equal attention as did the exterior in terms of aerodynamics. The new Stingray model featured twice the steel support in its central structure. However, a reduction in fiberglass thickness not only countered the extra weight, but also left the new Stingray slightly lighter than the previous Corvettes. The cockpit was stronger and safer, thanks to the reinforced steel girder. Also, the interior was quite roomy despite the tighter wheelbase. The 1963 Stingray was offered as a coupe and convertible, both of which had the same specifications right from the fiberglass-body-steel-ladder-frame chassis. The updated rear end comprised the CERV1-inspired independently sprung suspensions by half shafts and a transverse leaf spring. The front suspension was mostly carried over from the previous Corvettes and comprised unequal A-Arms and a standard anti-roll bar. The coupes are now legendary featuring a split rear window, two unmissable features that made the car stand out, drawing just about everyone's attention. Despite the prototypical vibe around the car, the split rear window turned out to be a design flaw as it obstructed rearward vision. GM got rid of the design in the 1964 model, and now, the split window is a hot collector's item. However, when you think of Corvettes it is the C2 convertible that enthusiasts are drawn to; the image of cruising two lane highways across the American landscape with the top down and the roar of that V8 under the hood is now the true Corvette driving experience. Featured here is an opportunity to own and experience that car that is the core of the Corvette driving experience.

When it comes to Corvette's it doesn't come more iconic then a “little red” Corvette. This car has been treated to an older restoration and the paint on this car has been well applied over professionally executed body work. The finish has been well maintained and presents with a deep shine. The stainless-steel trim and chrome bumpers likewise have been well kept and still shimmer with a deep luster. The white convertible top is clean and shows very little wear. This car also features the Kelsey-Hayes aluminum knock off wheels wrapped in white wall radial tires.

Inside the cabin, the dash very much represents the cockpit of early aircraft which no doubt explains the attraction of test pilots and astronauts of the time. The red interior was treated to a full restoration some years ago with new upholstery, carpet and dash pad and while is showing some light wear still presents well. Additional options include the teak wood wheel and AM/FM radio. The AM/FM radio is an aftermarket unit that presents as stock and plays AM/FM and will play music from other sources via Bluetooth and has a set of 9” speakers installed in the kick panels.

Under the hood this Stingray is powered by the same V8 engine as its predecessors, the 327 V8. This engine was good for 356 horsepower at 6,000 rpm and 352 lb-ft of torque at 4000 rpm, with the power delivered to the rear wheels. The engine was paired with a Borg-Warner manual 4-speed. The powerplant has had some subtle upgrades including GM HEI electronic ignition, Edelbrock Performer carburetor with electric choke, exhaust headers and features a set of Edelbrock valve covers and chrome air cleaner to add a little bling under the hood. Overall, the engine compartment presents well and is clean and well kept.

The undercarriage has been well maintained after the restoration some years ago. The clutch has recently been recently replaced and the drum brakes have been upgraded to four-wheel disc brakes. Suspension bushings are fresh, and the front shocks were recently replaced along with front stabilizers bar links. This Corvette comes with receipts outlining recent maintenance repairs and upgrades.

This car represents a great opportunity to own and drive an American icon. It has had some very subtle upgrades that greatly improve the driving experience of the car yet it for the most part remains original to its core maintaining the open roadster visceral driving experience that is uniquely Corvette. While this car presents very well and will no doubt draw attention at local shows and cruise ins, the real joy will be climbing behind the wheel of this car and driving it! Please call if interested or e-mail with specific questions. Thank you for looking.