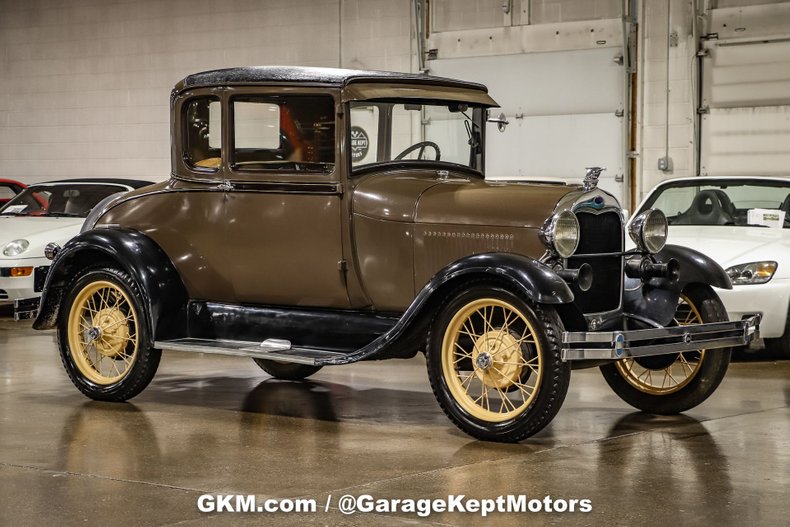 First produced late in the 1927 calendar year, the Ford Model A was designated a 1928 model and was the second market success for the Ford Motor Company, replacing the venerable Model T. Being available in four standard colors and a wide variety of body styles, which included coupes, roadsters, cabriolets, convertible sedans, phaetons, town cars, station wagons and even commercial vehicles, by February 4, 1929, one million Model As has been sold and just a few months later, two million (July 24, 1929). By of March 1932, Model A production ended with a total of 4,858,644 vehicles across all body styles.

Ford powered the Model A with a water-cooled L-head inline four-cylinder engine with 201ci of displacement which provided a whopping 40 horsepower and had a top speed of around 65 mph. The transmission was a conventional unsynchronized three-speed sliding-gear manual with a single speed reverse. Model As also had four-wheel mechanical drum brakes. The Model A was the first Ford to use a standard set of driver controls with a conventional clutch and brake pedals, throttle, and gearshift. Previous Fords used controls that had become uncommon to drivers of other vehicle makes. Finally, in addition to the United States, Ford also produced Model As in plants across the world including Argentina, Canada, Denmark, France, Germany, Italy, Japan, and the United Kingdom.
Presented here is a 1929 Ford Model A 2-dr Coupe that has been gently cared for by the same loving family for 55 years. With a two-tone brown and black exterior paint, this Model A may not be the flashiest vehicle on the road, but it is unlike any other. The overall outer appearance is stock with little or minimal signs of wear and age but still shows quite well. The bright yellow wheels are matched to the pinstriping that follows the body line around the entire cab surface. The chrome bumpers and radiator shell shine expertly and are topped off with the popular “Flying Goose” radiator cap.

The inline L-head engine is noted to have been rebuilt in the late 1980s and includes some updated documentation. The engine compartment along with the chassis/frame are in well-kept condition considering this vehicle will be celebrating its 100th birthday in just a few years. The owner has also included additional manuals and literature for this vehicle's next owner.

For the driver and any passengers, the interior appears to be in original condition. It is hard to tell if the upholstery is an older restoration as original finishes are visible. There are a few signs of use with a variety of holes on the driver's door panel and along the bottom of the passenger side bench. The rumble seat has been finished with black vinyl and does appear to be newer but in great shape.

Although most collector's do not desire to have this vintage of a vehicle in their collection, there really is something special about the Ford Model A. Whether you are a driver or a passenger, when you are in a Model A you truly are taken back in time. It's the simple nature of the drive and being connected to the vehicle that bring out the best in any classic and collector vehicle. Please call if interested or email with specific questions. Thank you for looking.