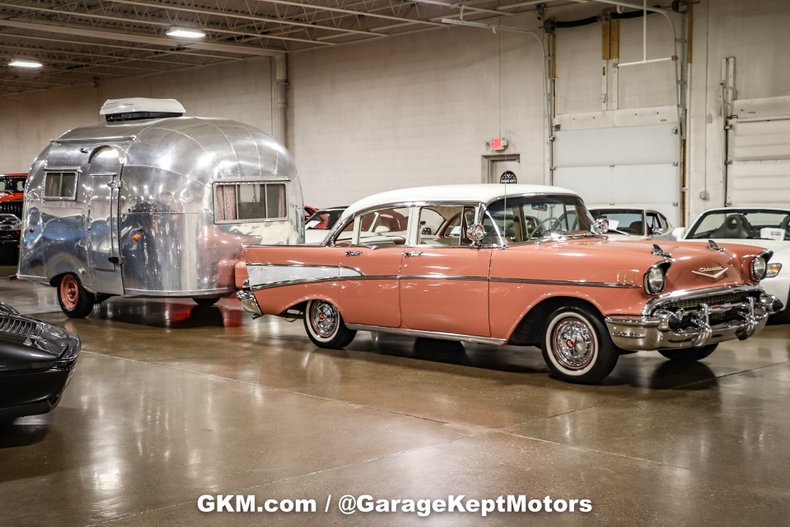 The ultimate vintage camping set up. Ready for shows and the open road!

Whether you are looking to travel the open road or a prescribed route, this vintage combination is sure to transport you back to a time when road trips held a special type of adventure.

Initially slated by General Motors to be a completely new car for 1957 model year, the Chevrolet Bel Air designed for the 1955-56 model year was carried over one more year. Ed Cole, chief engineer for Chevrolet, instituted that a series of changes would be necessary to keep buyers interested. These changes included a new dashboard, sealed cowl, and the relocation of air ducts to the headlight pods, which resulted in the distinctive chrome headlight configuration that helped make the 1957 Chevrolet model an instant classic. Fourteen-inch wheels replaced the fifteen-inch wheels from previous years to give the vehicle a lower stance as well as a wide grille was used to give the vehicle a wider look from the front; both iconic design elements that are only unique to the 1957 model year.

The 1957 Chevrolet was sometimes referred to as a “Baby Cadillac”, because many of the styling cues were like the Cadillacs of this era. Bel Air models, though maintaining the same chassis, powertrains, and body, were given upscale gold trim; the mesh grille insert and front fender chevrons, as well as the “Chevrolet” scripting on the hood and trunk, were all rendered in anodized gold. There were many options available that allowed the 1957 Chevrolet to be consider quite comfortable and luxurious. Some of these options included: air conditioning, a padded dash, power steering and power brakes, as well as a signal-seeking AM radio with power antenna.

Offered here is a completed restored, gorgeous example of the 1957 Chevrolet Bel that includes many modern updates to allow any road miles to be as comfortable as possible. With an entirely replaced and professionally rebuilt 355ci single barrel carbureted V8, 700R4 automatic transmission, Borgeson power steering conversion, and air shocks, this vehicle is a dream to drive. Even though the restoration was completed in the late 1990s, the detail and precision show as if the work had only been completed a few years ago. The Canyon Coral paint with white top is a stunning combination that is offset by the perfect amount of chrome accents that are polished expertly. Rounding out the look is white wall tires and chrome hubcaps.

With roots dating back to the late 1920s, the Airstream company was founded by Wally Byam who started building trailers out of Masonite in his Los Angeles backyard. The first Airstream, called the “Clipper” was debuted in 1936 and was named after the first trans-Atlantic seaplane. It slept four, carried its own water supply, was fitted with electric lights and cost only $1,200. Airstream is known for being the company with what some would describe as the sausage-shaped, aluminum trailers that are unlike anything else in the market.

Known as a “travel trailer” in most recreational vehicle circles, the Airstream has a dedicated group of enthusiasts and its own community of owners. Even after 91 years of providing travel aficionados, a home away from home, the Airstream company is still making the aluminum trailers that they were initially known for. Although the optional comforts have drastically changed over the years, Airstream has continued to stay true to their creed of providing the comforts of home to those who have a wander's soul.
Presented alongside this stunning 1957 Chevrolet Bel Air is a classic 16' “Bubble” Airstream trailer. Noted as being a California camper and having undergone a complete restoration in the early 2000's, this camper is ready for the road. Featuring only the necessities one might need, it comes complete with a sink, range with oven and even color matching coral propane tanks.

So, whether you are only taking this set to show or hitting the road for an adventure, this pair will put a smile on your face and those of anyone you might encounter. Both this vehicle and trailer are the best example of nostalgia and of a simpler time. Please call if interested or e-mail with specific questions. Thank you for looking.