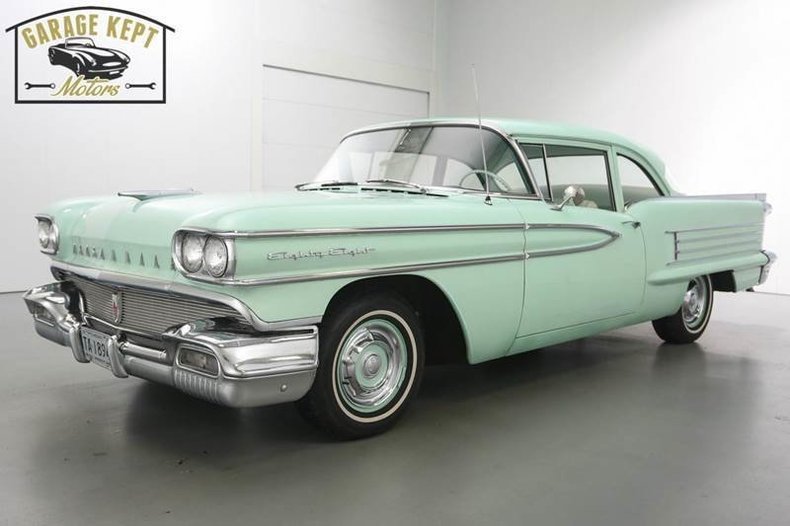 Offered here for consideration is hands-down the most original and historically documented vehicle Garage Kept Motors has ever had the privilege to sell. This beautiful and 100-percent original 1958 Oldsmobile 88 (Eighty-Eight) 2-Door Sedan, also called the Dynamic Series 88, is a true two-owner vehicle with just 38,000 original miles. It comes with the original bill of sale, original title, original owner's manual, and original keys. On January 31, 1958, Jared Taylor of Sparta, Michigan purchased this brand new Oldsmobile for his wife Sophie Taylor from Newhouse Oldsmobile, also in Sparta, MI. Jared paid a whopping $1,950 for this ride. Jared and Sophie eventually passed away and their son, Robert Taylor, inherited the car and maintained it for decades, driving it minimally. Then, in 2002, our client purchased the car from the Taylor estate and has kept up on preserving the car with care. It has never been driven in the snow and has always been garage-kept. In the past couple years, he has added a new heater core, new water pump, new brake pads, new tires, and repaired the exhaust system. Other than that, it is 100-percent original.The paint is the same paint Mr. and Mrs. Taylor spotted at Newhouse Oldsmobile in 1958. It is called Surf Green with the paint code on the cowl tag reading “30-30,” meaning it was painted Surf Green on the top and bottom as you see it today. It is not perfect but remains 100-perfect original and has not been re-sprayed whatsoever. The trim code reads “362,” which you will see in the photos signifies Green Morocceen Bolster with Green and White Pattern Cloth. It is the same interior as the day it rolled off the showroom floor, and remains in excellent condition. The car is powered by Oldsmobile's legendary 371ci Rocket V8 mated to a 3-speed column-shifted Hydramatic (automatic) transmission. It truly does have 38,233 original miles, which is confirmed by the service sticker on the driver's window column stating 30,795 from April 4, 1968. It starts on command and runs/drives exceptionally well for its age. The car has clearly been loved for a long time. 1958 also marked the year of the “Chrome Mobile” in Oldsmobile history. This example is no exception. From the timeless dashboard to the side trim pieces to the 50's rear fins; this car truly cannot be missed. The chrome is all-original and speaks to the style of the era. The craftsmanship is so precise and obviously done with pride. They certainly don't make them like they used to, and unfortunately since 2004, General Motors discontinued the Oldsmobile line altogether. Cars like this don't come around often (only 11,833 produced). What a great opportunity to own American automobile history with this classic Olds 88. See all photos and video on dealer website – it will be well worth your time! Call or e-mail if interested. Thank you for looking.VIN Breakdown: 587M23526Digits 1-2: Model Year – 1958Digit 3: Series – Eighty-EightDigit 4: Assembly Plant – Lansing, MIDigits 5-9: Production Number - 23526