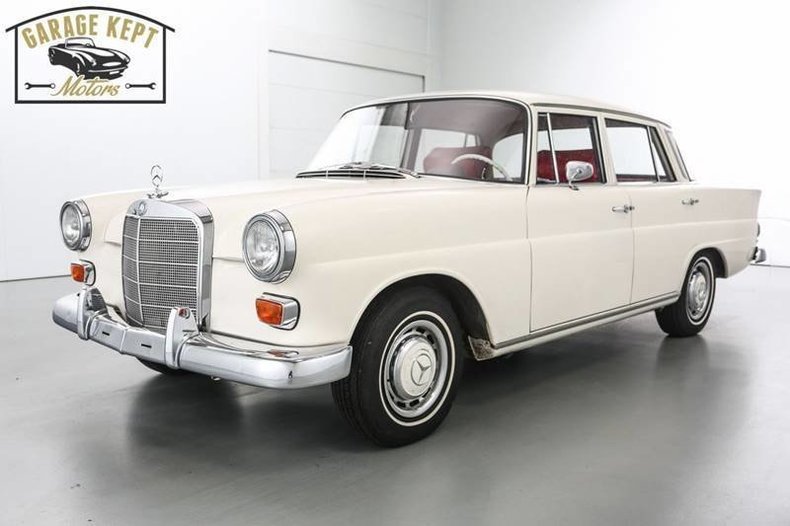 See over 100 photos and video on main website: Garage Kept Motors.Offered here is a garage-kept and highly original 1966 Mercedes-Benz 200D 4-Door Sedan. The First Series Mercedes W110 was introduced in 1961 and production continued until 1968. The W110 was known as one of the Fintail models, or “Heckflosse” in German, and this example was a pioneer of the Second Series W110, a Diesel-powered 200 model first released in 1966. The 200D was in production for just three years, replacing the 190D and eventually replaced by the 220D in 1969. This example is believed to be just a three-owner vehicle, with the first owner from Santa Barbara, California that owned the car until 1986. It was then sold to a highly reputable German car collector in Detroit, Michigan until our client purchased the vehicle in 2015. The car is powered by the original 2.0L/60hp Diesel Inline 4-Cylinder engine mated to the original automatic transmission with rear-wheel drive. The car has been meticulously maintained with all the service records dating back to 1986. The diesel engine fires up on command, after lighting the “salt-shaker” glow plug of course. It runs strong and the transmission shifts smooth (see video). The car has the original white paint, which is starting to patina with age, with an original red leather interior in immaculate shape for its age. This car has some rare and very cool features, including the pull-start Diesel start and the functioning vertical speedometer display that scrolls from green to red as you hit higher MPH. The engine and undercarriage also remain in incredible condition (see photos). The car also comes with all original books, owners manual, service records, and the original title from the first owner. This Fintail is an awesome vehicle and we believe it will only appreciate in value over time. A great classic cruiser for the whole family. And gets great mpg with the diesel powerplant. Call or e-mail if interested, or to make a reasonable offer. Thank you for looking.