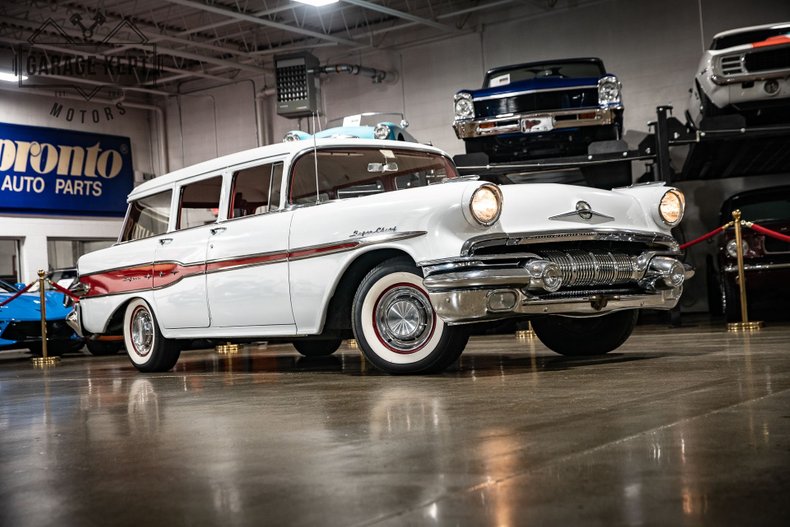 (Please note: If you happen to be viewing this 1957 Pontiac Super Chief Custom Safari on a website other than our Garage Kept Motors site, it's possible that you've only seen some of our many photographs of the car due to third-party website limitations. To be sure you access all the more than 150 photographs, as well as a short start-up and walk-around video, please go to our main website: Garage Kept Motors.)

“For the family that wanted a hardtop but needed a station wagon, the 1955 Pontiac Safari offered the best of both worlds” -Hemmings, April 2006

“For the first 20 years after the end of World War II, luxury and sportiness went together. The ideal of the casual yet comfortable lifestyle was found in everything from vacation advertising to clothing to architecture, and particularly in the automobile. Nearly every body style was revamped between 1949 and 1957 to reflect that uniquely '50s American paradigm of sporty luxury--roadsters returned as sports cars, coupes became hardtops, sedans spawned four-door hardtops, pickup trucks turned into coupe utilities and, perhaps most shockingly, the workaday station wagon was reworked into the sport wagon.

"General Motors' Pontiac Division was heartily in need of its own reinvention by the early 1950s. The conservative, semi-formal image of Pontiac's cars was mired in the division's prewar niche between basic Chevrolet and slightly more formal Oldsmobile. But Oldsmobile had undergone its own sporty rework with the introduction of the V-8-powered Rocket 88 for 1949, and Pontiac was looking increasingly stodgy and out of place.

“The Pontiac Safari, like its corporate cousin the Chevrolet Nomad, had its origins with the 1954 Motorama Nomad, which was a fantasy Corvette-based two-door station wagon. While the Motorama Nomad was never intended for production, it was teased in order to whet the public's appetite for something more than the four-door family haulers that were the standard station wagon offerings up to then. Both the Safari and the Nomad were envisioned as a marriage between the good looks of a pillarless hardtop and the utility of a station wagon.”

Offered here is a 1957 Pontiac Super Chief Custom Safari, the highest-spec station-wagon offering then available from GM's Pontiac Division. This beautifully maintained, red-and-white-over-red wagon currently shows 69,648 miles on its odometer, or fewer than 1,100 miles per-year on average since new.

The properly refreshed exterior white paint retains excellent gloss overall. The color nicely complements the car's Motorama-Novad-inspired design, notably on the sloped rear. The flash of red on the car's flanks adds flair, and the three star emblems adjacent to the “Safari” script told gawkers that this was indeed the top-of-the-line Pontiac 4-door wagon. The body sheet metal is free of dents, dings, or other damage. (To best assess the quality of the paint and trim finishes, please be sure to view the close-up photographs of the car in the accompanying gallery.) Delightfully unapologetic chrome trim, notably on the front grille, both front and rear bumper (the latter with through-the-bumper exhaust outlets (only one in use for the single-exhaust system), window surrounds, body-side panels, and taillights, is all in excellent condition with only minor patina from age on the side mirror and door handles. Cabin glass and lighting lenses are clear and undamaged. All factory badging—including the hood ornament, “Super Chief”-script fender badges, “Safari”-script rear badges, P-O-N-T-I-A-C tailgate chrome letters and rear stylized emblem-- is all properly in place. Red-painted steel wheels with full, brushed-metal wheel covers are mounted with period-correct wide-whitewall tires.

Inside, the exuberant optimism of the mid-Fifties is on full display in both design and color scheme; the look is an extrovert's delight. Red upholstery with white-vinyl panels and piping covers the seats and door panels, the latter trimmed with flashes of chrome in place of the white piping. (There is some deterioration on the lower door trim panels.) Excellent-condition red carpeting covers the cabin floors while red hard-surface floors with chrome rub-strips continue into the cargo area (with an under-floor compartment for the spare tire), including on the fold-down tailgate. The Pontiac-branded, 2-spoke steering wheel with chrome horn ring and red-leather-covered rim frames what can only be described as a perfect-Fifties dashboard: chrome and bright-metal trim, 120-mph horizontal speedometer, twin round gauge clusters, art-deco-style lettering, and the original push-button AM radio on the red-painted metal with “Pontiac”-script badge facing the front passenger. The shift lever for the automatic transmission is mounted on the steering column.

Under the hood, the car's original 347-cubic inch V8, the largest engine then available in a Pontiac, commands an extremely clean and properly laid-out engine bay. Surfaces have been refreshed in the proper colors—black for the large air cleaner and blue on the engine block and Pontiac-embossed valve covers. Viewed from below, the chassis is complete, straight, and undamaged. Focal points include the x-frame structure and the newer shock absorbers and muffler.

The car's original identification tag remains riveted in place as it came from the factory.

While the more than 150 high-definition photographs and the short walk-around-and-startup video available on the GarageKeptMotors website showcase this '57 Safari in detail from every angle, including from below, we expect and encourage in-person inspections at our Grand Rapids, Michigan showroom. Please call to arrange an appointment in advance as our showroom is not open to the public. And feel free to get in touch anytime by phone or email if you have questions.

This '57 Pontiac Super Chief Safari will turn heads and prompt thumbs-up responses at every stop. Enthusiasts and the general public alike are sure to appreciate this exemplary time-traveler.