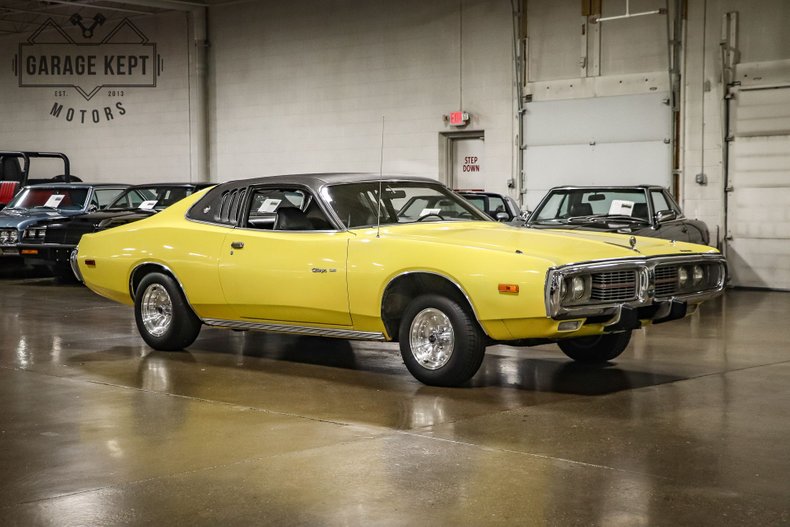 (Please note: If you happen to be viewing this 1973 Dodge Charger SE on a website other than our Garage Kept Motors site, it's possible that you've only seen some of our many photographs of the car due to third-party website limitations. To be sure you access all the more than 145 photographs, as well as a short start-up and walk-around video, please go to our main website: Garage Kept Motors.)

Writer, Brian Earnest, continued: “Dodge had been onto a good thing for years, and continued to stick to a winning formula with the 1973 Chargers. The Chargers got a major restyling for the 1971 model year, and those new looks took the cars through 1974. The 1973s got new grilles and vertically slatted taillights. Under the hood, the 1973 Chargers carried a base 225-cid slant six or the 150-hp 318 V-8. The 400 was optional in both two- and four-barrel varieties. The Chargers (also) got a new Torsion-Quiet Ride suspension setup for the model year, and disc brakes were standard on the front. The Special Edition 'SE' was the top trim level. It had a vinyl landau roof that featured a trio of vertical 'louver-like' windows — not great for visibility, but they looked cool.

Offered here is a 1973 Dodge Charger SE in original Bright Yellow (code Y1) paint with a black vinyl top over black. The Charger was built during the month of September 1972. Its odometer currently shows 75,988 miles, under 1,600 miles per-year since new. Nicely optioned and nearly all-original, the Charger is an excellent representative of the early Seventies automotive scene.

The Bright Yellow exterior non-metallic paint shows very well with an even gloss across the entire body. The sheet metal is free of dings or other damage, and the black vinyl top is in excellent condition with no rips, tears, or signs of abrasion. Only meticulous owner care through the years can account for the car's superb condition. (To best assess the quality of the paint and trim finishes, be sure to view the close-up photographs of the car in the accompanying gallery.) Chrome bumpers and body trim—including window surrounds, lower body-side accent, side mirror, fender-well accents, and door handles—are all in well-maintained condition with only light patina in places, notably on the door handles. A black, rear-deck spoiler is mounted. Cabin glass (including the bespoke SE “louver-like” side windows) is clear and free of imperfections as are all lighting lenses (including the wide taillight array). Factory badging includes the original hood ornament and “Dodge” emblem, Charger-script fender badges, circle emblem on the vinyl top, and “Dodge Charger” rear-deck emblem. Polished-metal, 14-inch, dish-style wheels from American Racing® are mounted with Warrior® 205/70 blackwall tires.

The Charger's black-themed interior includes a number of premium touches. Woodgrain accents are included on the door panels and pull-handle hardware together with a script “Brougham” badge. That woodgrain trim continues into the rear-passenger area. An indented panel on the dash is also executed in textured woodgrain with a “Charger SE” emblem. High-back front bucket seats (upholstered in black vinyl) share a center-console armrest. Black premium carpeting covers the cabin floors. A woodgrain-trimmed, 3-spoke, Dodge-branded steering wheel frames four circular gauge openings for the 150-mph speedometer and smaller engine-monitoring instruments all set in a woodgrain panel. Slide-lever controls for the heat and ventilation, and the original Chrysler Solid State push-button AM are also part of the driver's portion of the dash.

Under the hood, the original 400-cubic-inch V8 (as the sticker on its air cleaner proclaims) is centermost in a clean, properly organized engine bay. The engine block and manifold wear fresh blue paint, and chrome valve covers add flair. Viewed from below, the chassis is straight and undamaged.

The Charger's original build and identification tags remain as mounted at the factory. The car's original owner's manual is included in the sale.

While the more than 145 high-definition photographs and the short walk-around-and-startup video available on the GarageKeptMotors website showcase this '73 Dodge Charger SE in detail from every angle, including from below, we expect and encourage in-person inspections at our Grand Rapids, Michigan showroom. Please call to arrange an appointment in advance as our showroom is not open to the public. And feel free to get in touch anytime by phone or email if you have questions.

This yellow Charger SE is a real flashback to the early Seventies, when style, bright colors, and of course, performance were at the heart of the American automotive scene, particularly, the MOPAR part of that scene. The next owner of this beautiful Charger can expect to hear reminiscences aplenty when fellow Seventies-decade enthusiasts stop to admire this time traveler.