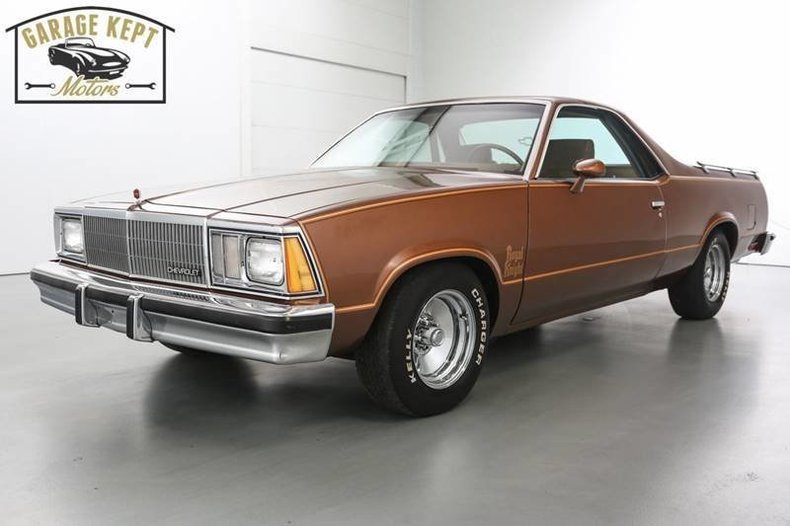 See all photos and video on main website: Garage Kept Motors.Offered here is a one rare car, or truck, or both actually. We are pleased to present this unique 1980 Chevrolet El Camino SS Royal Knight for consideration. The Royal Knight was initially released in 1978 as the Black Knight, which lasted for just one year due to a lawsuit for using that name (around the time of the Black Panther civil rights movement). In 1979, the name was officially changed to Royal Knight and it was offered as the top trim package to the Super Sport line. The SS Royal Knight offered the majestic hood decal, large front air dam, Rally wheels, painted sport mirrors, proud side striping, and Royal Knight identification on front fenders and tailgate color-keyed to the chosen factory color. Only 2,815 Royal Knights were made that year. In 1980, the only design feature that changed was the vertical grill upgrade. The Royal Knight trim package ran until 1983, so just four years of production. This example is finished in Light Camel Metallic, the original factory color, which was one of 14 color options for 1980. The car came from the factory with 5.0L/305ci V8 but was upgraded in 2008 with a rebuilt bored .30 over 350 V8 engine. At that time, the car underwent frame-on restoration with new floor pans and an Edelbrock carb, intake, cam, and headers were also added. Original components include the original 4-speed automatic transmission, independent coil springs, hypoid rear suspension, power brakes, power steering, and dual exhaust. The car runs and drives exceptionally well, and sounds great doing it (see video). This Royal Knight remains in excellent condition, a true testament to 1980's styling from GM. The car also comes with the original 1980 El Camino sales brochure that highlights all the options you could order in 1980. Call or e-mail if interested, or to make a reasonable offer. Thank you for looking.VIN Breakdown:Generation: 5Manufacturer: ChevroletModel Series: El CaminoBody Style: 2dr Sedan Pick-upEngine: V-8, 305cidModel Year: 1980Assembly Plant Code: Leeds, MOSequential Production Number: 426216