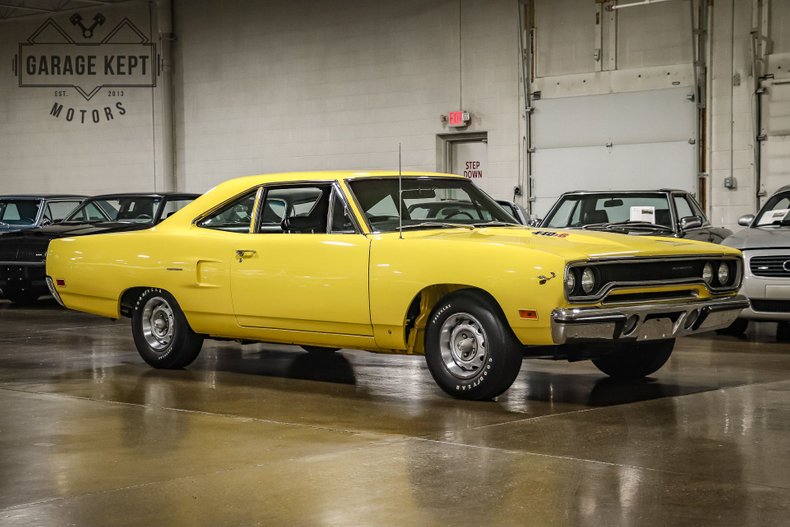 - Matching numbers V-code 440 6 BBL engine
- Frame-off restoration to factory, original condition
- Functional Air Grabber hood
- 4-speed manual transmission with Pistol Grip
- Track Pack Dana with 3.54 gear ratio
- Previously owned by Alfred Cook of Goodyear from 1986 to 1999
- Interior is the Decor Package which was rare for this model car
- Lemon Twist Paint
- Restoration was completed by the Richard Janosik family who purchased the car from Alfred Cook of Goodyear
- Finished 3rd at the Mopar Nationals
- Featured in Muscle Car Enthusiast Magazine in May of 2005
- Recently serviced

(Please note: If you happen to be viewing this 1970 Plymouth Road Runner on a website other than our Garage Kept Motors site, it's possible that you've only seen some of our many photographs of the car due to third-party website limitations. To be sure you access all the more than 150 photographs, as well as a short start-up and walk-around video, please go to our main website: Garage Kept Motors.)

The Pontiac GTO may have started the muscle car wars, but Chrysler upped the ante with the Road Runner. The Allpar website continued: “The Plymouth Roadrunner was a first in American automotive history: a high-power, but budget-priced muscle car, with light weight and strong engines. They were based on the mid-sized 'B-body' car (Belvedere/Satellite), but were lighter and cheaper. To get the maximum performance at the lowest cost, the Roadrunner slashed non-performance amenities….”

Offered here in rare Lemon Twist over black is a historically significant, well documented, fully restored, 440-cubic-inch, V Code “Six Barrel” Road Runner in superb condition. At 70,625 miles—fewer than 1,400 miles per-year on average—this rotisserie-restored Plymouth performance legend has been lightly used and treated with the respect it deserves throughout its entire half-century life, up to and including its recent servicing in preparation for sale. Few cars represent American Muscle any better.

This special (and specially equipped) Road Runner was built in November 1969 and owned by Alfred Cook of GoodYear Tire & Rubber from 1986 to 1999 when it was sold to Richard Janosik. His family commissioned the full, rotisserie restoration. The car has competed at the Mopar Nationals finishing third and was profiled in the May 2005 issue of Muscle Car Enthusiast magazine.

The Road Runner's Lemon Twist paint finish is virtually perfect across the entire “Belvedere” 2-door-hardtop body (including under the hood and trunk), here with the added allure of the Air Grabber intake hood. The simplicity of the overall bodywork—free of some of the graphic excesses and extensive blackout trim of later versions—makes for a pure representation of the original Road Runner aesthetic. Still, Mopar aficionados won't mistake this for anything but the performance over-achiever it is. The “440+6”-identification on the hood bulges, the “road runner” graphic on the rear-fender air scoops, and the small “road runner” emblem on the rear-deck make that pretty clear. (To best assess the quality of the paint and trim finishes, be sure to view the close-up photographs of the car in the accompanying gallery.) The car's chrome bumpers and body trim is all in as-new condition free of patina. There is no damage whatsoever to the sheet metal. Cabin glass and all lighting lenses are similarly perfect. Factory original silver-painted steel wheels with trim rings are mounted with period-correct GoodYear® PolyGlas raised-white-letter tires.

Inside, the straightforward, unobtrusive muscle-car aesthetic continues with smooth-finish black vinyl panels covering the seats, split-front and rear bench. (The flair provided by the white “stripe” trim on the seats is part of the rare and optional interior décor group.) Black carpeting and dash are similarly restrained. Instrumentation includes a 150-mph speedometer, 8,000-rpm tachometer (with analog clock in its center) with the original push-button AM radio still in place. A dash-mounted switch controls the operation of the Air Grabber hood. The wood, pistol-grip handle on the floor-mounted 4-speed manual-transmission gear-selector lever makes a strong performance statement. In the same way, the Road Runner image on the passenger side of the dash makes a clear statement of the car's pedigree. And to clear up any doubt, just lift the hood.

Underneath that functional Air Grabber hood is a perfectly clean, virtually spotless engine compartment with the “440 Six Barrel”-checker-flag-labeled, open-sided orange air cleaner (with rubber seal to mate with the Air Grabber hood) atop the massive V8. The numbers-matching engine wears its correct orange engine-block paint. Fenders, cowl, and underside of the hood are all properly painted in the body color. (A sampling of the car's intoxicating engine note can be had in the accompanying startup-and-walkaround video link.) Viewed from below, the chassis and related equipment show the same perfect condition as the remainder of the car; the appearance is identical to what would have been the case on the day the car was first delivered. The full-length dual-exhaust system with crossover, lower engine and transmission surfaces, suspension components and geometry, Track Pack Dana 3.54 rear axle, and absolutely rust-free body are all visual focal points.

The original body-identification and build tags remain as mounted at the factory.

While the more than 150 high-definition photographs and the short walk-around-and-startup video available on the GarageKeptMotors website showcase this '70 Road Runner in detail from every angle, including from below, we expect and encourage in-person inspections at our Grand Rapids, Michigan showroom. Please call to arrange an appointment in advance as our showroom is not open to the public. And feel free to get in touch anytime by phone or email if you have questions.

One true joy of owning a muscle car lies in experiencing its power… not only the power from under the hood, but the power of these cars to transport the driver back to the Sixties. The privilege of owning and stewarding this particular very rare, classic, and historic '70 Road Runner into its next half-century will accompany that satisfaction for its fortunate next owner. Does it get any better? We doubt it.