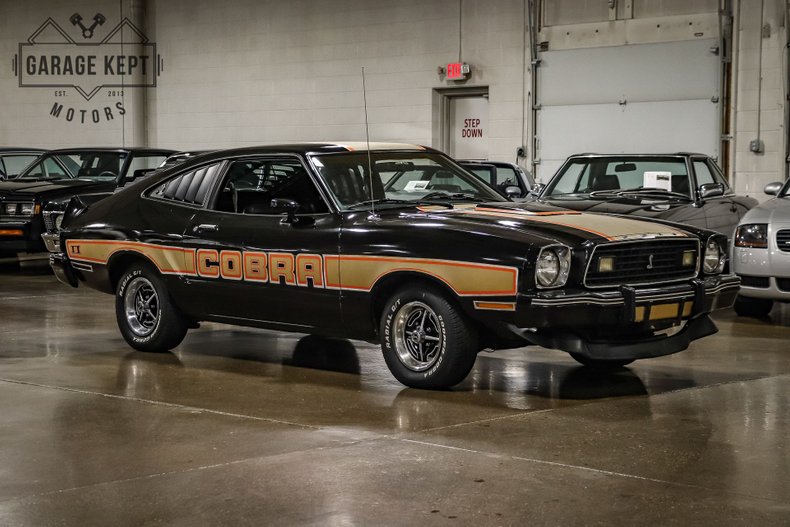 (Please note: If you happen to be viewing this 1978 Ford Mustang Cobraon a website other than our Garage Kept Motors site, it's possible that you've only seen some of our many photographs of the car due to third-party website limitations. To be sure you access all the more than 145 photographs, as well as a short start-up and walk-around video, please go to our main website: Garage Kept Motors.)

The Motor Trend writer, Nelson Cardadeiro, continued: “… the Cobra name was used on '68-and-later Shelby Mustangs, '69 and early '70s CJ-equipped Fairlane/Torinos, and later on the SVT-prepped late-model Mustangs. In the mid-'70s, the name was resurrected to give the Mustang II a performance image. When Ford introduced the Cobra II for the '76 model year, it emulated the look, if not the performance, of a Shelby GT 350. The Cobra II had stripes, a hood scoop, quarter-window louvers, cobra badges, and spoilers to update the Shelby look from the previous decade. The base engine, though, was the 2.3L four-cylinder, with the 2.8L V-6 or 5.0L V-8 available as options. Ironically, the more sedate-looking Mach 1 package came standard with the V-6 and optional with the 5.0.”

Offered here is a 1978 Mustang Cobra II in black (with gold graphics) over black. The Mustang was optioned with the 5-liter (302-cubic-inch) V8 in addition to the Cobra-package options. Currently showing 67,760 miles on its odometer, the car has traveled fewer than 1,600 miles per-year on average since new.

The original exterior black paint finish is free of damage and retains good gloss with some expected patina from age, notably on the driver's side roof. The integrated lower-front black spoiler is undamaged. Upward-facing gold-and-red hood, roof, and rear-deck stripes show fading and surface crazing from the sun. Body-side “Cobra II” graphics are in good condition with some imperfections. (To best assess the quality of the paint and trim finishes, be sure to view the close-up photographs of the car in the accompanying gallery.) The remaining factory badging includes F-O-R-D lettering front and back, and a Shelby cobra-snake front-grille emblem. Cabin glass and lighting lenses (including on the tri-color taillights) are clear and uncracked. Stock, 4-spoke, styled-steel wheels with Cobra center caps and chrome trim rings are mounted with Cooper® Cobra Radial G/T raised-white-letter tires.

The black-themed original interior has been well maintained. Molded-pattern black door panels with lower carpeted surfaces are very handsome. Horizontal-pattern black vinyl upholstery on the front buckets and foldable rear bench seat is free of damage, fading, or discoloration. Premium black carpeting covers the cabin floors extending into the under-hatch cargo area. A three-spoke, brushed-metal-trimmed steering wheel with stylized horse-head center emblem frames the sport instrument cluster (tachometer, speedometer, and three smaller engine-monitoring gauges) set in a brushed-metal panel. Both the steering wheel brushed metal and the similar instrument panel surface show some degradation. Other switchgear including heating and air-conditioning controls and the original AM-FM push-button radio are located on the lower dash. Brushed-metal dash trim with a digital clock face the front passenger. The T-bar-topped shift lever for the automatic transmission is located on the console forward of a combination storage box-center armrest.

Under the hood, the original 302-cubic-inch Ford V8 retains its original appearance in a stock engine bay. No modifications are noted and all components—including air conditioning—are properly installed. Viewed from below, the chassis is straight and undamaged.

in detail from every angle, including from below, we expect and encourage in-person inspections at our Grand Rapids, Michigan showroom. Please call to arrange an appointment in advance as our showroom is not open to the public. And feel free to get in touch anytime by phone or email if you have questions.

While the Muscle Car Era had been short-circuited by government regulation by then, the late Seventies still saw interesting sporting automobiles make their way onto the scene. The nicely downsized Mustang II was one example, and when decked out in Cobra garb and added equipment, offered visual excitement and still-gratifying performance. And it still does.