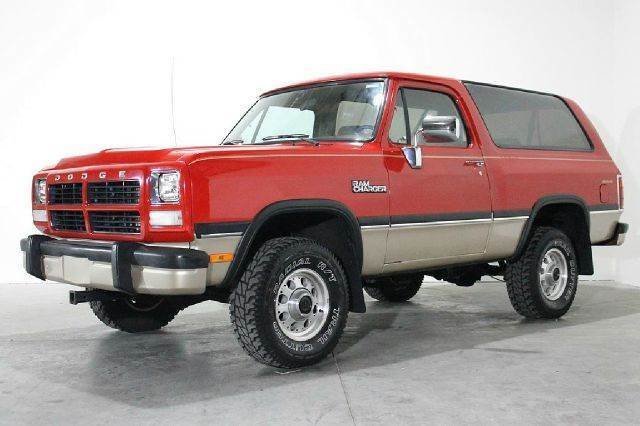 Offered here is clean, rust free 1993 Dodge Ram Charger for consideration. This collectible SUV was in production from 1974 to 2001 and this example, the second generation, is the most desirable. Even more so, 1993 marks the final year of the second generation (the third generation hardly qualifies as a Ramcharger because it lacked any similarities and was essentially a Dodge Durango) making this Canyon Sport edition even more valuable. This truck originally hails from Iowa and is finished in red over a tan interior. It is powered by the original 5.2L V8 engine with a 4-speed automatic transmission with O/D and 4WD. It features power steering, power brakes, front and rear trailer hitch, power windows, power locks, newer tires, lift gate, towing package, trailer brakes, ABS, working AC and much more. It was recently outfitted with a $5K entertainment/stereo system by Extreme Car Audio of Grand Rapids, which includes a Pioneer DVD/Navigation display, JL tweeters and subwoofer. It also just had new U-joints installed, new exhaust, and new brake pads in addition to a lot money spent previously on the suspension. It also has a Viper remote keyless access alarm system. This Ramcharger is clean inside and out, especially underneath, with near $20K invested all said and done. It starts on command and performs optimally. This truck will surely hold its value if not appreciate over time. Comes with owner's manual, service receipts, and a clean CarFax and title. A very capable vehicle at a very reasonable price.