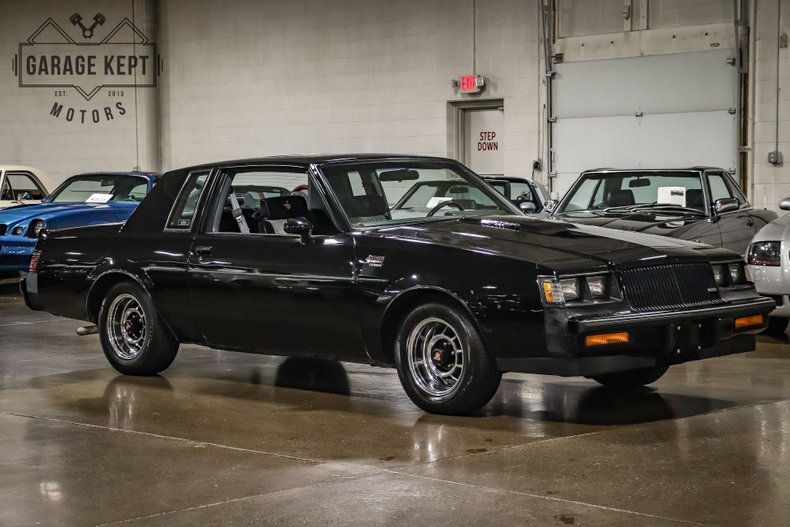 (Please note: If you happen to be viewing this 1987 Buick Grand National on a website other than our Garage Kept Motors site, it's possible that you've only seen some of our many photographs of the car due to third-party website limitations. To be sure you access all the more than 145 photographs, as well as a short start-up and walk-around video, and a link to the Grand National's Carfax history report, please go to our main website: Garage Kept Motors.)

“My message to the group: 'We have to beat the Corvette.'"– Buick assistant chief engineer Don Runkle at the time, quoted in Car and Driver, October 2018

In the magazine's 2018 retrospective, Gary Witzenburg wrote: “Car and Driver's April 1986 review began: 'Corvette, get outa' town. Mustang, move over. Camaro, keep your back to the wall at all times. The biggest, baddest gun west of the Pecos is loose in the streets, and there's gonna be some shootin'….' C/D clocked a 4.9-second zero-to-60-mph run, quicker than a contemporary Corvette, most U.S.-market Ferraris, and even the Lamborghini Countach. Its quarter-mile was also impressive at 13.9 seconds. But C/D's tech team calculated that the test car's engine was actually pumping out something like 290 horses versus the advertised 235, so it may have been tweaked by Buick engineers.” Read the entire article here:

Offered here is a 1987 Buick Grand National owned by the same family (purchased new by the father and passed on to his son) over its 34-year life. The car has traveled 62,444 miles, or an average of just 1,850 miles per-year, further evidence of its high level of owner-care. Its Carfax shows right-front impact damage back in its second year, 1988. Whatever damage may have resulted has been long since fully repaired with no remaining sign of either damage or repair.

Outside, the menacing looking black paint and matching trim (part of the W02 “blackout trim package”), together with the original, black-accented wheels with “turbo”-logo center caps, makes a strong impression. Paint and trim are in excellent condition; the body is free of dents or evidence of damage. From the subtle hood bulge up front to the equally subtle rear deck spoiler, there's an “all business” vibe at work here. Virtually no chrome trim is present on the bodywork, with polished metal on the wheels offering the only metallic gloss. The paintwork is in excellent, unblemished condition across the entire car. (To best assess the quality of the paint and trim finishes, be sure to view the close-up photographs of the car in the accompanying gallery.) Cabin glass and lighting lenses are clear and free of damage. Michelin® Harmony 215/65/R15 tires are mounted.

Inside, light-gray takes over from the black-only exterior color statement. Low-pile, vertically pleated, crushed-velour upholstery is in place, and it retains remarkably near-new condition that could have only resulted from very careful use over time. (The driver's seat cushion shows some light staining from use, but no damage.) Embroidered “turbo” logos are featured on the front seat headrests. The driver's seat cushion shows some light staining from use, but no damage. The black dashboard, with its “Turbo 3.8 Liters” emblem, shows no signs of wear or careless use. (In a somewhat amusing comment on the era, the “55” on the speedometer is highlighted in fluorescent color as a result of government mandate.) The Delco AM-FM cassette radio is as-installed at the factory. Control surfaces and graphic markings are very well-maintained. The black, brushed-metal-trimmed sport steering wheel with its center Buick-emblem logo in black is understated, but effective branding. The leather-trimmed t-shifter for the automatic transmission is console-mounted. Black carpeting and door trim show the same absence of wear and evidence of careful use seen throughout the car. Not surprisingly, the interior of the car's trunk is clean and complete.

Beneath the white “Buick Turbocharged” graphic (with an associated Garrett turbocharger logo) on the underside of the hood, the massive turbocharger and its related air-routing pipes dominate the view of the 3.8-liter V6. The engine compartment is clean and nicely detailed, with all original components are properly located. Underneath, the car's chassis shows the same level of care and lack of abuse seen throughout the rest of the car. Only surface rust, and only on untreated metal components is present. There is no body rust.

While the more than 145 high-definition photographs and the short walk-around-and-startup video available on the GarageKeptMotors website showcase this '87 Buick Grand National in detail from every angle, including from below, we expect and encourage in-person inspections at our Grand Rapids, Michigan showroom. Please call to arrange an appointment in advance as our showroom is not open to the public. And feel free to get in touch anytime by phone or email if you have questions.

Another historical tidbit from the Car and Driver retrospective: “Don Hackworth, who replaced Reuss as Buick general manager in 1984, authorized a cool but controversial commercial showing a Grand National rumbling menacingly through a city at night to a Buick-ized version of the George Thorogood and the Destroyers song, 'Bad to the Bone.'”

The commercial can be seen here: https://www.youtube.com/watch?v=p1Kw1qW_laA

Something tells us, the next fortunate owner of this beautifully kept Grand National will be humming "Bad to the Bone" every time they get behind the wheel.