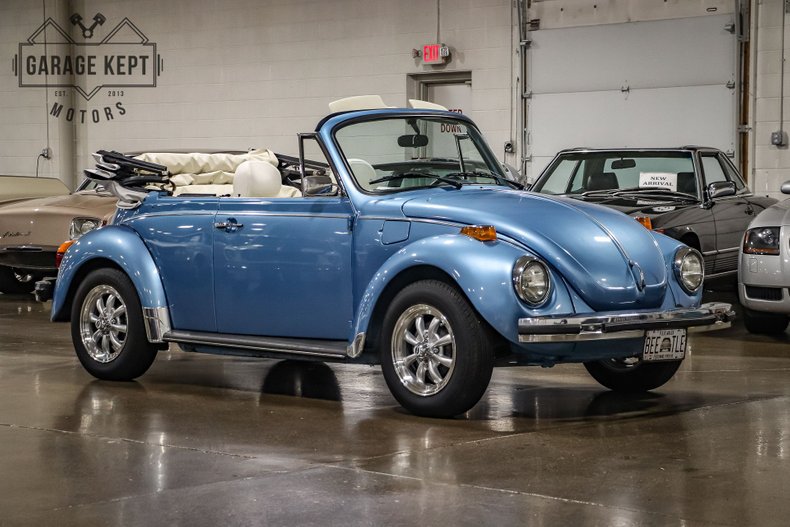 (Please note: If you happen to be viewing this 1978 Volkswagen Super Beetle Convertible on a website other than our Garage Kept Motors site, it's possible that you've only seen some of our many photographs of the car due to third-party website limitations. To be sure you access all the more than 150 photographs, as well as a short start-up and walk-around video, please go to our main website: Garage Kept Motors.)

“... the world's best-selling car ever, and now it is probably the most usable real-world classic you can own.” Classic Motoring magazine, May 2011

Classic Motoring went on to opine about the Beetle's remarkable success: “Nobody can deny that the Volkswagen Beetle was a phenomenal success, but putting your finger on the exact reasons why is not simple. The original pre-war design brief for a car that was affordable to buy and run on modest means, could carry two adults and three children at 60mph (all day on the new autobahns) and return over 30mpg was laudable enough, but hardly revolutionary - a similar desire to provide transport for the masses had previously brought success to many manufacturers throughout the world, most spectacularly to Henry Ford with his Model T. Yet… Volkswagen's Beetle… outsold the Tin Lizzie and was well on its way to an astonishing total of 21,529,464 million units worldwide....”

Offered here is a 1978 example of the car that outsold every other in history. This Ancona Blue (Code L97B) over white Super Beetle Convertible has the added distinction of showing just 41,098 miles on its odometer, fewer than 1,000 miles per-year on average since new.

Hagerty notes: “The Super Beetle Cabriolet was the last version of the Beetle to be sold in the U.S. and did very well in the last two years of its production. Sales for 1978 rose from 7,155 units the year before to 9,932 and there was a second Champagne Edition in blue or red metallic paint with a white interior, which attracted 1,100 buyers. It featured an AM/FM radio, styled steel wheels, a rosewood dash and padded steering wheel. The Cabriolet's price had risen to $5695.”

The exterior of this Ancona Blue '78 Bug is as pristine and factory-original as one would expect for such a low-mileage car. The metallic light-blue paint is uniformly glossy and smooth without signs of fading across the entire car. Body-panel fit and alignment is virtually perfect and there is no body damage whatsoever. (To best assess the quality of the paint and chrome finish, be sure to view the close-up photographs of the car in the accompanying gallery.) Chrome—including the bumpers, hood trim, body trim, fender-rear trim, headlight, and windshield trim—is bright with minimal patina from age. The same is true for the dual exhaust outlets. Cabin glass and all lighting lenses—including on the large taillights-are clear and un-cracked. Aftermarket EMPI® 8-spoke, 15-inch aluminum alloy wheels are mounted with fresh Kumho® Power Star 58 165/80 tires.

Inside, white is the color theme on the classic Teutonic design. The white, horizontal-design, textured-vinyl seating surfaces and matching door trim (with pleated pockets) is in like-new condition. Black carpeting covers the cabin floors. A four-spoke black steering wheel with Wolfsburg-castle VW emblem frames the large speedometer on the burled-woodgrain-trimmed black padded dashboard. The floor-mounted 4-speed shifter also wears the black color. Across every surface in the cabin, the condition is original and un-marred.The stock Blaupunkt® AM-FM push-button radio remains mounted. This is a true survivor Beetle.

Under the rear hood, the Super Beetle's legendary 1600-cc flat-horizontal-four-cylinder engine exhibits the same level of originality and outstanding condition as the rest of the car. Similarly, the front trunk is clean and orderly with the factory spare tire still properly in place.

The Beetles original build and identification tags remain mounted. The white cover for the convertible top "boot" and the original owner's manual are included in the sale.

We expect and invite in-person inspection of this red '78 Beetle at our Grand Rapids, Michigan location. However, because our showroom is not open to the public, we ask only that you call or email us for an appointment in advance so that we can devote our full attention to you during your visit. Meanwhile, the more than 150 high-definition photographs of the car and the short walk-around-and-startup video on the GarageKeptMotors site faithfully represent the car's condition, but feel free to call or email with any questions.

At the end of his VW review, the Classic Motoring writer got a little nostalgic: “Having a Beetle was similar to walking a dog. People would see you and ask about it, only to soon reminisce about the time they or a friend drove a 'Bug.' It always brings a smile or two to recall a crazy road trip with a Beetle....”

The next owner of this lovely blue Super Beetle Convertible can expect plenty of head-turns, waves, and thumbs-up responses every time the car's out on the road.