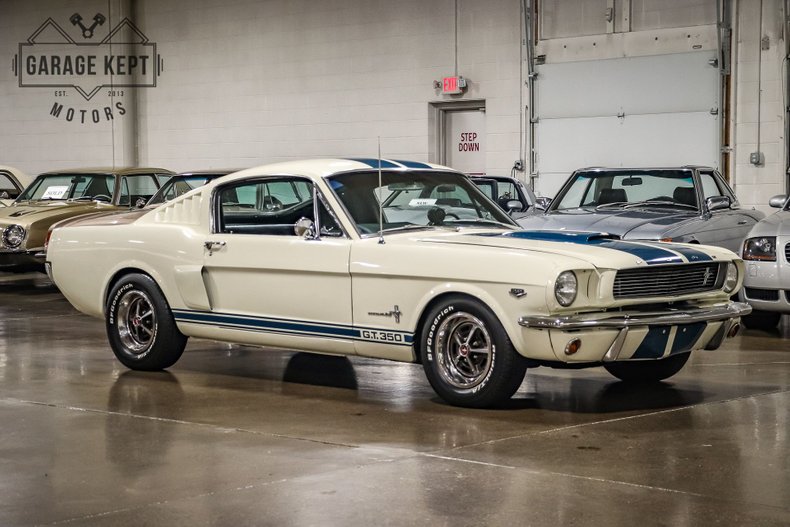 (Please note: If you happen to be viewing this 1966 Shelby GT350 Fastback Tribute on a website other than our Garage Kept Motors site, it's possible that you've only seen some of our many photographs of the car due to third-party website limitations. To be sure you access all the more than 145 photographs, as well as a short start-up and walk-around video, go to our main website: Garage Kept Motors.)

Hagerty Media's Sam Smith nicely explained his idea and origins origins of the “tribute” car this way: “No one knows who built the first tribute car. The question recalls the old line about racing, how the first car race took place shortly after the world's second car was built. The first tribute car was probably assembled five minutes after some enterprising mechanic noticed that the horseless carriage he wanted was both rare and expensive. When people want what they can't have, they often fall back on the next best thing—building one instead.”

And to those who might question the phenomenon, Smith made an excellent case: “Finally, consider the automobile's intended use: Tribute cars let you drive and share historic moments that might be otherwise doomed to a quiet life of little more than display. By way of example, several years ago, my garage held a 1965 Ford Mustang fastback. Decades later, someone worked it over, making it drive like and visually resemble its more valuable sibling. I bought the Ford partly because I didn't have the bank account for a real '65 GT350, and partly because I adored how it worked. My car didn't quite feel like a real Shelby, but who's counting? I drove it hard and often, on back roads and road trips, in the rain and sweltering heat, leaving stop signs sideways in clouds of tire smoke…. Several months into ownership, while pumping gas in some rural town in the middle of nowhere, it occurred to me that had I been fortunate enough to own a real '65 GT350, I probably wouldn't have driven it in the same carefree, glorious fashion.”

Offered here is a very well-executed tribute to the 1965 Shelby GT350 Fastback in the emblematic Shelby color combination: Wimbledon White with blue racing stripes over black. The price is well below the $250,000+ it could take to acquire the original version, which would then need to spend most of its time locked away somewhere for fear of damage or theft. In the Hagerty writer's words, this one can be enjoyed out on the road in a “carefree glorious fashion.” Originally a C-code Mustang, the car's odometer now reads 35,923 miles.

The car's exterior is free of damage, dings, or dents. Body panel alignment is very good. The paint finish is uniform and properly applied including on door jambs and the undersides of the trunk lid and hood. The blue racing stripes on the hood, roof, and rear deck are properly aligned and applied (including to the lower front and rear valances). Shelby touches include the front grille with offset emblem, side brake-duct air scoops, through-the-rear-valance dual exhausts, and side stripes. Badging includes front-fender “289” engine identification, “Mustang 2+2” model designation behind the front wheel wells, Mustang-emblem fuel filler-cap, and blue “GT 350” designation on the blue side stripes. All chrome on the car is in excellent condition with minimal patina: bumpers, cabin-glass trim, side mirrors, and exhaust tips all show very well. Period-correct styled steel wheels (with chrome trim rings and Mustang emblem red center caps) are mounted with BFGoodrich® Radial T/A raised-white-letter performance tires.

Inside, the stock appearance remains with Shelby-like additions. Seat upholstery on the front low-back buckets and foldable rear 2-place bench seat is the original-style vented vinyl in black. Door trim combines black-painted sheet metal and horizontal-pattern black vinyl with attractive chrome trim. Carpeting is black with carpet mats (with embroidered Cobra® emblems) protecting the front floors. A Mustang sport-style steering wheel with wood-riveted-style rim and Mustang center emblem frames the black dashboard. Instruments are stock with the addition of a Cobra-branded tachometer on the top center dash. (Shelby cars had their tachs mounted in a similar location, but within a fiberglass partial dash cap.) A retro-style radio is mounted in the factory location. Dash trim remains in excellent condition. The shifter for the 4-speed manual transmission is floor-mounted. A console featuring storage, an armrest, and cupholders is mounted between the front bucket seats. The Mustang's trunk is clean with period-correct, patterned vinyl floor and spare-tire covers in place.

Under the hood, power is supplied by a 289-cubic-inch V8. The engine wears “Ford Performance” valve covers, a chrome air-cleaner cover with period “289” label, billet-aluminum hardware. The chassis-stiffening supports are also in chrome, and an aluminum radiator is installed. The engine bay is very clean with components properly mounted and hoses and wiring correctly routed. Viewed from below, the car's chassis is straight and undamaged: there are no signs of overly aggressive driving or track use. Focal points include the impressive performance-exhaust headers, full-length, dual exhaust system, front disc brakes, and anti-sway bar.

While the more than 145 high-definition photographs and the short walk-around-and-startup video available on the GarageKeptMotors website showcase this Shelby GT350 Tribute in detail from every angle, including from below, we expect and encourage in-person inspections at our Grand Rapids, Michigan showroom. Please call to arrange an appointment in advance as our showroom is not open to the public. And feel free to get in touch anytime by phone or email if you have questions.

Sam Smith concluded his Hagerty piece this way: “Classic cars are nothing if not shareable joy, and in that light, the tribute car is as egalitarian as it gets. There's also a shared connection with ideas we cherish around here: Learn your history and appreciate what came before. Carve out your piece of the rock, and don't worry what others think. And most of all, when in doubt, fling open that garage door and just drive the thing.”