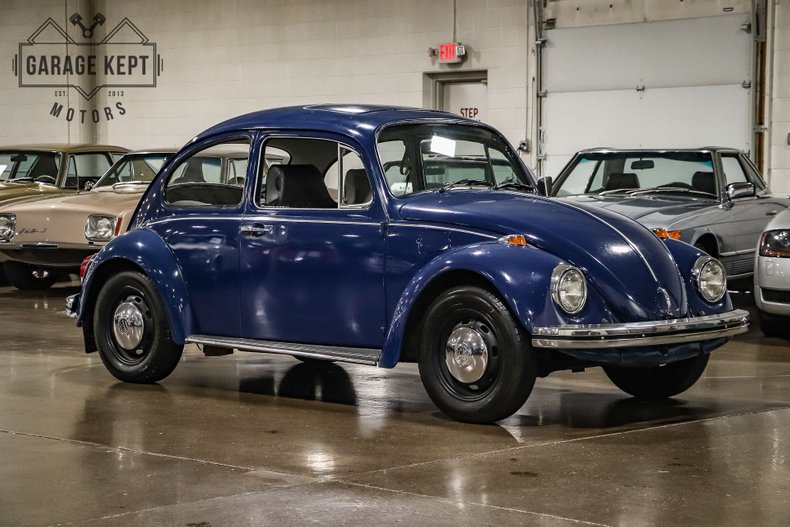 (Please note: If you happen to be viewing this 1968 Volkswagen Beetle on a website other than our Garage Kept Motors site, it's possible that you've only seen some of our many photographs of the car due to third-party website limitations. To be sure you access all the more than 135 photographs, as well as a short start-up and walk-around video, please go to our main website: Garage Kept Motors.

“The men who make the VW make it very well. The inspectors make it perfect.” - Period VW Beetle advertisement

The copy in the advertisement cited above went on to celebrate the fanatical level of detail pursued by inspectors of Volkswagens. This was a particularly strong selling point at a time when American manufacturers were known for haphazard quality control. “There are thousands of inspectors who literally pick every Volkswagen to pieces. For the paint job alone, no less than eight inspectors check every VW.” The photograph in the ad showed a block-shaped mass of crushed metal, a Beetle that failed to pass one of the inspections.

While the period magazine advertisements for the Beetle became a high point in advertising history, that fame only mirrored the success of the car itself. In its May 2011 issue, the British enthusiast magazine, Classic Motoring, encapsulated the history and some of the allure of owning a VW Beetle: “It's the 'Poor Man's Porsche' with a similar air-cooled, rear-mounted boxer engine and transaxle driving the rear wheels. Until recently it held the record for the biggest production run (21,529,464) and the longest, having been produced continuously from wartime until just a few years ago. As ever, VW Beetles make timeless practical classics that never seem to go out of fashion and thanks to Volkswagen's shrewd marketing policy from the outset, spare parts have never been a problem. The number of independent specialists means repairs and servicing are similarly sleep-easy, and there's a massive fan base… in the US, where it became a hippie icon."

The 1968 Beetle 1500 shown here in dark blue over black vinyl is a largely original survivor. The car has been well-maintained through its lifetime and now shows a mere 67,980 miles on the odometer, under 1300 miles per-year on average since new. This is a very reliable and very drivable classic with power delivered easily through the floor-mounted 4-speed shifter. Too many Beetles have suffered from well-intended, but ill advised “updating” and modifications that reduce the model's appeal and value. Not here.

The exterior dark blue paint is in good condition overall showing patina from age. The brightwork, glass, and steel wheels with chrome VW-logo hubcaps show very well. Emblems are properly mounted and display only light patina from age. The body is free of damage with tight panel-fit. Chrome bumpers retain near-original luster. Cabin glass and all lighting lenses are clear and uncracked.

Inside, the painted dash matching the exterior color is unaltered with the exception of an aftermarket Pioneer audio head unit. Original black textured-vinyl upholstery is free of wear and damage, but is loose, particularly on the rear bench seat. Door -panel inserts are also black vinyl. The Beetle's dashboard hosts the large, round VDO® speedometer and gas gauge is framed by the original steering wheel wearing the traditional Wolfsburg-castle VW logo (in homage to the company's northern Germany hometown) in its center. Rubber matting covers the cabin floors. The shift lever for the 4-speed manual transmission is located on the floor. The car's front trunk houses the spare tire for added crash-protection.

The car's venerable 1500-cc horizontal-4-cylinder is complete. The engine bay is clean and tidy, and the same is true of the undercarriage, showing only minimal surface rust on some un-protected metal. This has been a well-maintained car.

While the more than 135 high-definition photographs and the short walk-around-and-startup video available on the GarageKeptMotors website showcase this '68 Beetle in detail from every angle, including from below, we expect and encourage in-person inspections at our Grand Rapids, Michigan showroom. Please call to arrange an appointment in advance as our showroom is not open to the public. And feel free to get in touch anytime by phone or email if you have questions.

Legions of VW Beetle fans know these cars well. Many have probably already read the Classic Motoring article quoted here, but if that's not the case, be sure and search the issue online. The article is a wealth of information, old ads, and not a small amount of love for the brand in general. We are pleased to have this piece of Volkswagen history here in our showroom, but we don't expect it'll be around long.