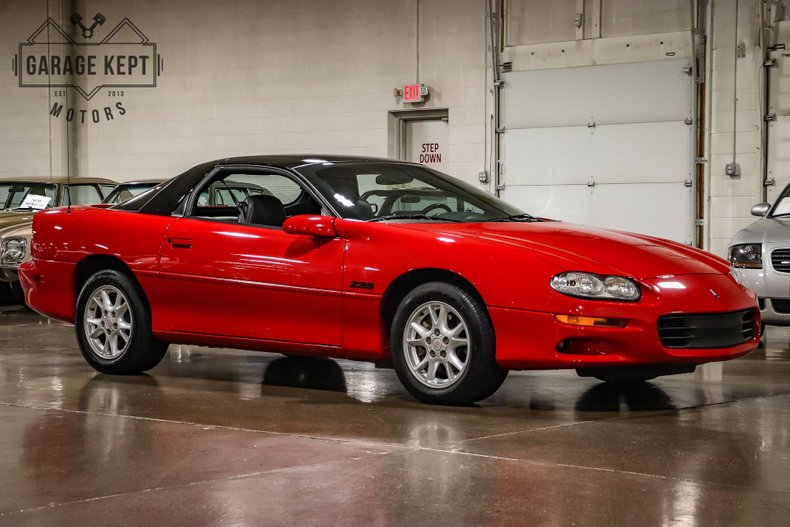 (Please note: If you happen to be viewing 2002 Chevrolet Camaro Z28 on a website other than our Garage Kept Motors site, it's possible that you've only seen some of our many photographs of the car due to third-party website limitations. To be sure you access all the more than 145 photographs, as well as a short start-up and walk-around video, and a link to the Z28's low-mileage, certified one-owner Carfax history report, please go to our main website: Garage Kept Motors.)

The LSX writer, Andrew Nussbaum, continued: “ Car people the world over were in a collective state of shock and dismay. Today, many say they knew the Camaro was on the way out and also knew it would return. It was only a seven-year hiatus, while Americans got the SUV bug out of their system.”

“Since 1998, the Camaro Z28/SS has been powered by the legendary Gen III 5.7L/346 cubic-inch LS1, making 305-325 underrated horsepower, depending on year and model. V8 Camaros were wielded by either a four-speed-overdrive automatic (4L60-E) or BorgWarner (T56) six-speed manual tranny. And both V8 models had standard four-wheel anti-lock disc brakes with optional traction control.”

While Chevrolet would indeed relent and re-introduce the Z28, 2002--its 35th model year--would be the last of the F-body Camaros.

Offered here is a 35th Anniversary Edition, 2002 Camaro Z28 in Bright Rally Red over Ebony. Sold new at Pres Koll Chevrolet in Okemos, Michigan, the Z28 now shows just 24,441 miles, or fewer than 1,300 miles per-year on average. The car's outstanding condition demonstrates its one owner treated the Camaro with great care. (Please note that the “accident with no damage” incident referenced in the Carfax is a mistake. The car was in storage at the time, and a correction is forthcoming from Carfax.) The car's original window sticker, included in the sale, is another indication the Z28 was regarded as special from day-one. Please refer to the photos of the window sticker in the gallery to see the comprehensive list of the car's original standard and optional equipment. All other original documentation is included with the car.

The Z28's exterior—from its blackout front grille, over the gloss-black roof, to the rear-deck spoiler—is showroom-new in appearance. The red and black paint is uniformly glossy and free of flaws. Even the door-handle areas and lower-body surfaces are scuff-free. No dings or dents—even small ones—are present on the sheet metal. Cabin glass (including the large rear hatch) and all lighting lenses are clear and free of cracks or other marks. Original factory badging—including the Camaro emblem in front, “Z28” identification on the front fenders and rear bumper cover, and the "Camaro" embossed on the rear fascia—is all properly in place and undamaged. Original 10-spoke, 16x8-inch factory aluminum wheels (with red-bowtie-logo center caps) are mounted with 245/50 GoodYear® Eagle RSA performance tires.

Inside, black leather-trimmed seat upholstery in a classic, vertically pleated design is showroom-new in appearance. Very light creasing on the driver's seat cushion is the only indication of use. In the same way, virtually all interior surfaces—dashboard, leather-trimmed, multi-function steering wheel, door panels, headliner, console, carpeting and more—are free of damage and retain their new-car feel. Graphic markings on the driver-focused instruments and switchgear are as-new, sharp and crisp. Black carpeting covers the cabin floors. The cargo area appears never to have held any cargo. A dash-mounted plaque identifies the car as a 35th Anniversary Edition Camaro. The original audio unit (with optional Monsoon® speaks) remain mounted above the center-dash HVAC controls. The console hosts the shifter for the automatic transmission, a cupholder, and center armrest with storage.

Under the hood, the 5.7-liter V8 dominates a clean, complete, and orderly engine bay. No shine-enhancing surface-spray products have been used. The entirely stock display is free of aftermarket modifications. Viewed from below, the car's chassis is perfectly straight, remarkably clean, complete, and undamaged. All components are properly in place.

While the more than 145 high-definition photographs and the short walk-around-and-startup video available on the GarageKeptMotors website showcase this '02 Camaro Z28 in detail from every angle, including from below, we expect and encourage in-person inspections at our Grand Rapids, Michigan showroom. Please call to arrange an appointment in advance as our showroom is not open to the public. And feel free to get in touch anytime by phone or email if you have questions.

There are those who say if you want to really experience “the Heartbeat of America,” there's no better place than the driver's seat in a Z28 Camaro, music turned up, open road ahead, and the sound of the V8 for accompaniment. If you managed to miss out on that automotive treat, well, here's one more chance to grab hold of it.