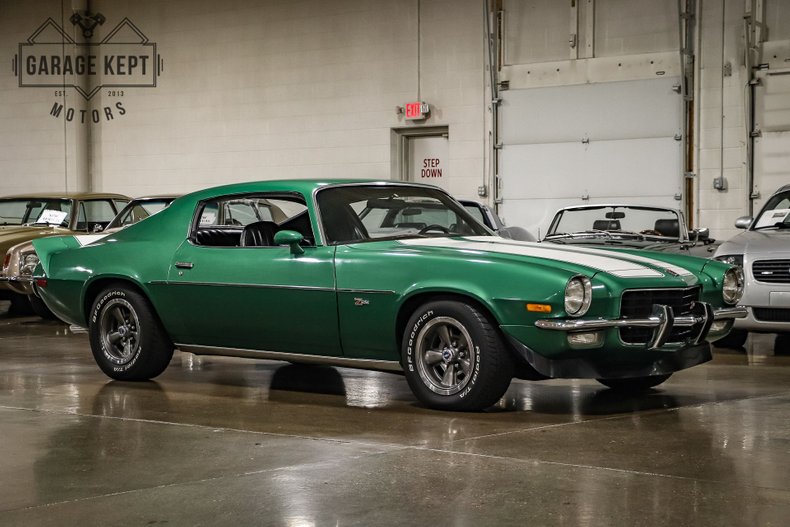 (Please note: If you happen to be viewing this 1973 Chevrolet Camaro Z28 on a website other than our Garage Kept Motors site, it's possible that you've only seen some of our many photographs of the car due to third-party website limitations. To be sure you access all the more than 145 photographs, as well as a short start-up and walk-around video, please go to our main website: Garage Kept Motors.)

Here's how the people over at Hemmings describe the '73 Z28: “One of the best-styled American performance cars from the early 1970s was the second-generation Camaro. From its Ferrari-inspired egg-crate grille pointing forward in a very prominent form, to the short, sloping fastback-shaped rear that makes the car look like it's at speed even when it is standing still, the Camaro, courtesy of the stylists at Chevrolet, has one of the most inspiring sporty exterior designs that has ever been applied to a mass-produced automobile. Their combination of menacing good looks and encouraging road-handling characteristics made them coveted by Chevy and muscle-car fans everywhere; even sports-car guys lusted after them.”

Offered here is an original, numbers-matching, 4-speed manual 1973 Camaro Z28 in dark green over black. The car's odometer shows 60,232 miles, or just 1,254 miles per-year since new. For the past 45 years the car has been owned and maintained by the same family. It is a condition-one Z28.

The exterior dark-green metallic (code 42) paint retains near showroom-new gloss across the entire car. It has never been repainted. Bespoke Z28 hood and rear-deck twin stripes are rendered in white. A black chin spoiler is mounted in front while the rear spoiler rises from the rear fenders; the way the white stripes “travel” across the rear spoiler is particularly distinctive. Chrome full bumpers are mounted front and rear with overriders in front. The front grille is a blacked-out “egg crate” design with surrounding chrome trim. Other chrome includes the headlight trim, window trim, door handles, and exhaust tips, all in well-maintained, original condition. Cabin glass and lighting lenses are clear and free of damage. All factory-mounted badging is properly in place, including the Z28 emblems in the front grille, the rear deck, and front fenders, and the Camaro emblem atop the front fascia. Factory styled steel wheels in gray metallic with bowtie emblems and “Chevrolet Motor Division” identification on the center caps, and chrome trim rings are mounted with BFGoodrich® Radial T/A raised-white-letter performance tires.

Inside, the black vinyl upholstery on the front buckets and rear bench seat has been meticulously cared for over the years. It is no exaggeration to describe its condition as “like new.” Floor carpeting, also in black, has been similarly cared for. Door trim in black with pleated-look vinyl is undamaged. The 4-spoke, black steering wheel with bowtie-emblem center, frames the driver-oriented instrument cluster set in woodgrain trim. A large, round, 130-mph speedometer and a 5,600-rpm-redline tachometer are flanked by four, smaller, engine-monitoring gauges. The original AM-FM push-button radio remains mounted. The Hurst® branded, angled-grab-handle shifter for the 4-speed manual transmission is mounted on the black console, forward of the combination armrest and storage box separating the front bucket seats.

Under the hood, the 350-cubic-inch, 245-horsepower V8 in its original trim occupies a complete, but not overly detailed engine bay. A chrome air-cleaner cover is the only adornment. (Note: Both the engine and the transmission are numbers-matching originals.) Viewed from below, the chassis is complete, straight, and undamaged. The car's full-length dual-exhaust system is a focal point.

The Z28's build and identification tags remain properly mounted. The car's original owner's manual is included in the sale.

While the more than 145 high-definition photographs and the short walk-around-and-startup video available on the GarageKeptMotors website showcase this '73 Z28 in detail from every angle, including from below, we expect and encourage in-person inspections at our Grand Rapids, Michigan showroom. Please call to arrange an appointment in advance as our showroom is not open to the public. And feel free to get in touch anytime by phone or email if you have questions.

A period magazine advertisement for the Z28 was headlined: “Separates the men from the toys.” The point being made was that many “boys” who had once decked out their bicycles with stickers that did nothing to improve performance, were now grown up and buying automobile “toys” with similar showy, but useless stickers. The Z28, on the other hand, was performance-built from the ground up. And more than anything, that truth remains the reason these cars are so cherished still today.