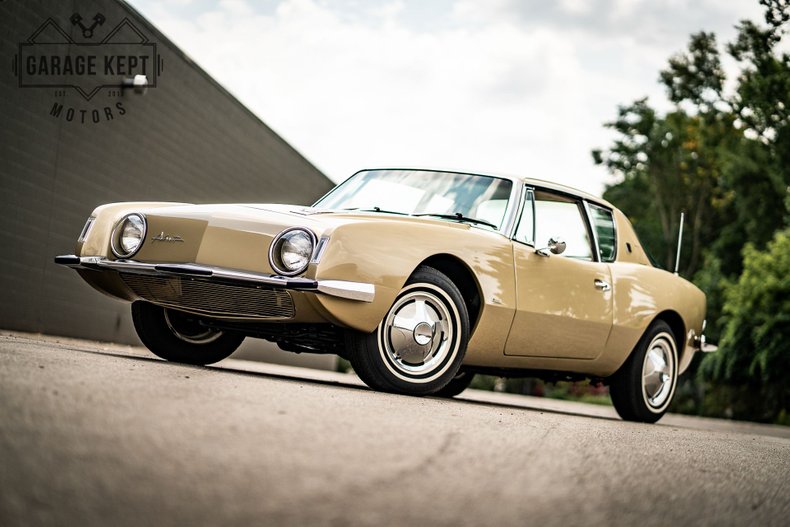 (Please note: If you happen to be viewing this 1963 Studebaker Avanti SC on a website other than our Garage Kept Motors site, it's possible that you've only seen some of our many photographs of the car due to third-party website limitations. To be sure you access all the more than 150 photographs, as well as a short start-up and walk-around video, please go to our main website: Garage Kept Motors.)

“The rakish 1963-64 Studebaker Avanti was among the most daring 1960s American cars, a modern masterpiece….” – Dan Jedlicka's Road Tests and Classic Cars

Longtime automotive writer, Dan Jedlicka, raved on about the Avanti: “Performance? An Avanti with a supercharged V-8 was one of the fastest 1960s autos. A supercharged model hit 168 mph, while a modified version reached 196 mph--a staggering speed for a 1960s production street car. Some 29 Bonneville speed records were smashed by a supercharged Avanti.”

“Safety? The Avanti (Italian for 'forward') was the first mass-produced, fiberglass-body four-passenger American car. It also was the first such car to use caliper-style disc brakes.”

“Sexy? James Bond author Ian Fleming ordered a black Avanti and shipped it to foreign countries he visited outside his native England. Ricky Nelson, the second most popular (behind Elvis) rock and roll singer of the late 1950s and early 1960s, also owned an Avanti…. In short, the Avanti was a modern masterpiece. Too bad it didn't last long enough to help the veteran Studebaker Corp. from failing in the United States in late 1963.”

Offered here is a full-body-and-mechanical-restored 1963 Studebaker Avanti SC in metallic gold over tan. The car was the subject of a 2017 Studebaker Drivers Club magazine profile and is further documented with its Studebaker factory build sheet. Sold new at Coronet International Motors in Lexington, Kentucky on March 22, 1963, the car's odometer now shows 53,022 miles, or fewer than 925 miles per-year on average since new. With a total of just 4,643 Avantis sold for the 1963-64 model years, this gold Avanti must stand as one of the very best such cars still in existence.

The exterior gold paint maintains a virtually showroom-new finish across the entire car: even gloss and reflectivity, even on lower-body surfaces. Panel-alignment is excellent and there is no sign of damage or appreciable wear to be seen. The sculpted body of the Avanti—crisp edges, flowing lines, and a perfect stance-- was stunning in 1963, and still looks appealing today. Chrome was used sparingly to good effect. Here, all chrome—on the bumpers, headlight trim, cabin-window trim, delicate taillight trim, side mirrors, and door handles—shines beautifully with only very light patina evident (for example, on the upward face of the door handles). The restrained badging mounted at the factory—the stylized “Avanti” script on the front, “Studebaker” script logo on the rear, the lovely stylized “S” on the offset hood trim and sail panels, and script “Supercharged” designation on the lower front fenders—remains in place and in excellent condition. Factory-tinted cabin glass and all lighting lenses are clear and undamaged. Trendsetter® thin-whitewall steel-belted radial tires are mounted on factory steel wheels with bespoke chrome wheel covers.

The car's interior color theme is light tan. The forward-folding front bucket seats and rear, sculpted 2-position seats are upholstered in very well-maintained vinyl. The upholstery is free of damage and shows virtually no wear overall. Red, multi-point-connection safety belts (appropriate in a car which, when modified, hit a then-record 196 mph) are installed anchored on the front. Door trim features vertically pleated tan panels with lighter almost ivory trim above. Avantis came with power windows. Black carpeting covers the cabin floors as well as the lower door trim. The original, two-spoke Avanti-branded steering wheel frames comprehensive, driver-focused instrumentation with eight separate openings. The dashboard features a pleated look echoing the door-panel design, and chromed switchgear unique to the Avanti. The original Studebaker-branded push-button radio remains mounted in the center-dash. The console includes handsome Studebaker and Avanti badging, heat and ventilation controls, the shifter for the automatic transmission, and a lockable storage box. Overhead, cockpit-like lighting controls are in place. Some surfaces in the interior show limited, very light patina from age-related use. Overall, though, the interior is 100% true to the designer's creation and very presentable.

Under its front-hinged hood, the 289 V8 is accompanied by a new Paxton® supercharger. The entire engine bay is extremely clean and original. Bright-finished metal, including on valve covers, the turbocharger, and other components adds visual “pop.” Under-hood, body-color-painted surfaces are flawless. Viewed from below, the lower-front grille is undamaged, and the chassis is straight and complete. The full-length dual-exhaust system is a focal point. Frame and suspension components have been treated with a rust-inhibiting coating.

The car's serial-number tag (identifying this as the 1,923rd Avanti built in 1963) remains riveted in place as originally mounted at the factory.

While the more than 150 high-definition photographs and the short walk-around-and-startup video available on the GarageKeptMotors website showcase this '63 Avanti in detail from every angle, including from below, we expect and encourage in-person inspections at our Grand Rapids, Michigan showroom. Please call to arrange an appointment in advance as our showroom is not open to the public. And feel free to get in touch anytime by phone or email if you have questions.

While an Avanti II model would be resurrected years later by a group of optimistic investors, the South Bend, Indiana-built '63-'64 model will always be the highpoint for the Studebaker model that arrived too late to resuscitate the storied brand. The rarity of Avantis—particularly cars in this exceptional condition—means they generate interest and admiration aplenty when they're out in public. The next owner of this beautiful piece of automotive history can expect repeated enthusiastic thumbs-up greetings wherever they go.