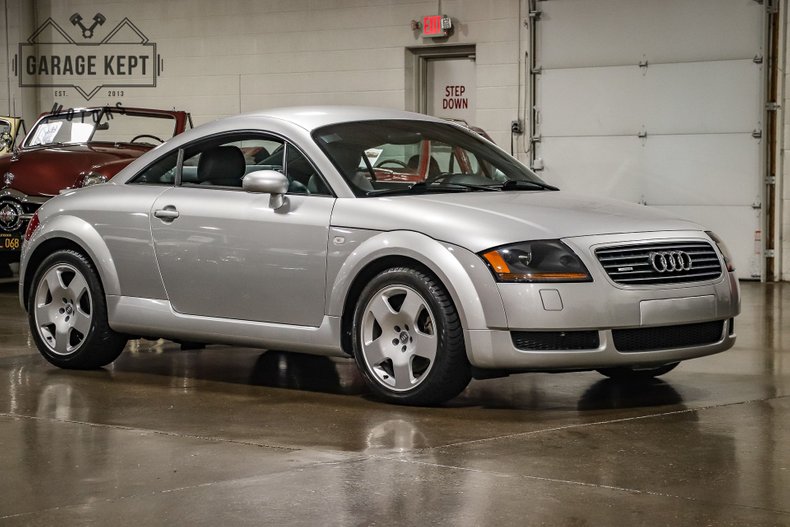 (Please note: If you happen to be viewing this 2001 Audi TT Quattro Coupe on a website other than our Garage Kept Motors site, it's possible that you've only seen some of our many photographs of the car due to third-party website limitations. To be sure you access all the more than 110 photographs, as well as a short start-up and walk-around video, and a link to the TT Coupe's accident-and-damage-free, low-mileage Carfax history report, please go to our main website: Garage Kept Motors.)

In August of 2011, David Booth, a writer for the Canadian “Driving” website reviewed the 2001 Audi TT ten years after its launch. He lavishly praised virtually every aspect of the car.

On TT design: “The TT is not a car for the introverted. Outre, avant-garde, space age; chances are the TT has been called them all. When Audi's designers put pen to paper, they were obviously inspired by Oscar Wilde's immortal admonition, 'There is only one thing in the world worse than being talked about, and that is not being talked about.' Of course, Wilde could never have dreamed of anything like Audi's TT. But I'm sure he would have approved.”

On TT performance: “Thanks to a truly outrageous 25+ pounds of turbo-boost, the top-of-the-line TT's version of the little four-banger maxes out at 225 horsepower, exactly the same number as BMW's newest variant of its coupe, the six-cylinder 330Ci.”

On TT handling: “The same balance applies to the TT's handling. There's plenty of grip from the 225/45R17 performance radials and the steering is a delight. But the TT rolls a little more than a S2000 or Boxster when the going gets hot and heavy. That's not necessarily a bad thing, as the TT has a decent highway ride. And neither of those other sporty numbers offers the security of the TT's quattro all-wheel-drive system when the road turns slimy.”

On the TT interior: “Audi's round and aluminum motif continues inside with plenty of buffed alloy making its shiny presence felt. My favorite items are the rotary dials that control the venting system and the similarly styled buttons that control the seat heaters. In fact, the whole interior is quite stylish.”

His conclusion: “… the TT does many things well. And besides, it really is a beauty.”

Offered here is a 2001 Audi TT quattro coupe in silver over gray-and-black. This is the exact color combination Audi chose for nearly every piece of advertising and brochure created to launch the model. The car's odometer shows 82,236 miles, or just over 4,000 miles per-year on average. The car's original window sticker and impeccable service record are included in the sale. It's obvious this TT has been cared for with love over the two decades since it emerged from Ingolstadt to the raves of the automotive press.

The silver paint was Audi's choice for the launch in all likelihood because of the visual impression it makes: the car appears almost to have been carved from a single block of metal. Its remarkably curvaceous shape (new welding equipment had to be invented to form the area where the roof meets the rear deck) is shown to perfection. The waiting lists to acquire the cars new ran into months. Here the paint retains the high-quality finish Audi has become known for: perfectly even application and consistent gloss across the entire body. There are no dings, no dents, no scrapes on the metal. The very limited use of bright trim adds to the impression of a solid, single-piece design. The black front grilles—another pure design element—retain their factory-new appearance. Cabin glass and lighting lenses are crystal-clear. Restrained 4-rings Audi badging is properly located. The rear-deck spoiler—added to create more rear downforce to avoid some earlier cars' tendency to “fly” at high speeds—was mounted at the factory. Dual exhaust tips were limited to the 225-horsepower quattro version. Factory five-spoke forged-alloy wheels are mounted with 225.45 R17 Nokian® winter performance tires.

Under the hood, the transversely mounted, turbocharged, 20-valve, 4-cylinder powerplant occupies a perfectly clean engine bay. This space could not have looked much nicer the day the car was delivered. There are no indications of modifications, and all stock covers are in place. Viewed from below, the chassis is complete. Light scratches can be seen on the lower front valance and engine-bottom cover, however the exhaust system shows no compression damage as might be the case had the car been subjected to too-aggressive driving or track use. (The view of the lower rear of the car is a delight.)

While the more than 110 high-definition photographs and the short walk-around-and-startup video available on the GarageKeptMotors website showcase this Audi TT in detail from every angle, including from below, we expect and encourage in-person inspections at our Grand Rapids, Michigan showroom. Please call to arrange an appointment in advance as our showroom is not open to the public. And feel free to get in touch anytime by phone or email if you have questions.

One of the frequent accolades given to the first-generation TTs by the automotive press was “destined to be a classic.” As the years go by, that seems more and more inevitable. There was a purity in the early design that has been eroded in later editions of the model. So, this opportunity to acquire a truly “original TT," with the 225-horsepower engine, quattro all-wheel drive, 6-speed manual, and in launch-edition colors will only become increasingly rare.