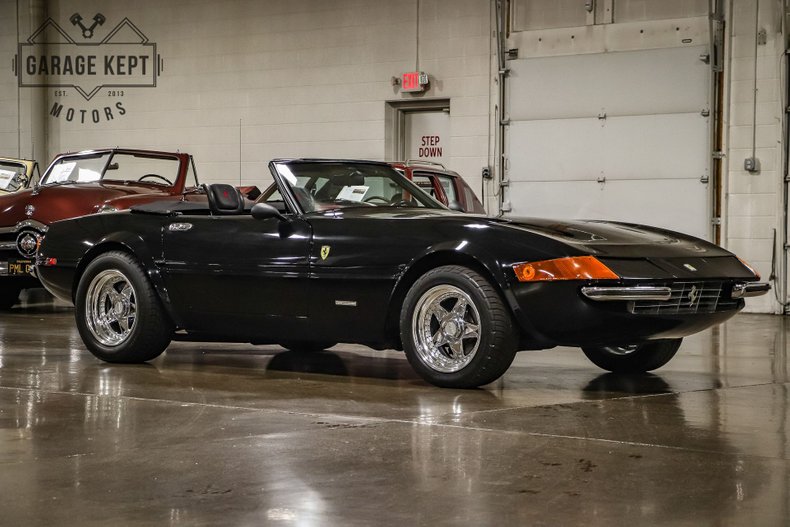 (Please note: If you happen to be viewing this 1972 Ferrari 365 GTS/4 Daytona Spyder Tribute on a website other than our Garage Kept Motors site, it's possible that you've only seen some of our many photographs of the car due to third-party website limitations. To be sure you access all the more than 145 photographs, as well as a short start-up and walk-around video, please go to our main website: Garage Kept Motors.)

“It wasn't a real Ferrari, but it still looked badass and survived two seasons on (Miami Vice).” - Motor Trend, April 2020

The background story of this car was further chronicled by Motor Trend: “All hardcore Miami Vice fans and car buffs... know that Crockett's Ferrari was not an authentic Daytona Spyder. The Ferrari on the show was a replica built on a C3 Corvette chassis by Tom McBurnie of McBurnie Coachcraft, who produced two examples. One for glamour shots and the other to take a good beating during stunts. The show used a replica because it was cheaper—and because Ferrari North America refused to supply authentic Ferraris to the show.”

The Motor Trend piece continued: “So, where exactly did those two rejected Daytona Spyder replicas end up? From what we could gather, the stunt car version landed a role opposite John Candy in the 1989 comedy film Speed Zone. After its use in the film, the car sat abandoned in the desert for nearly two decades. Since being tracked down and discovered, the former Miami Vice star car underwent a restoration and is now on display at the Volo Auto Museum in Volo, Illinois. The other more polished example used for most of the shooting is apparently in the hands of a private collector.” Not anymore.

The car's bodywork is undamaged; no dings, dents, or scrapes. The black paint is uniform and glossy across all body panels. The original McBurnie chassis identification plate remains attached showing the car as “an original California Daytona Spyder” with both a VIN and a serial number as well as its February 5, 1986 build date. Ferrari emblems and decals are properly located (including emblems in the front grille and on the rear decklid). Features like the chrome quad (Abarth® logo stickers included) exhaust pipes, Alfa-Romeo-style chrome door handles, quad taillights in red and amber, split front and rear bumpers, racing-style side mirrors, chrome 5-spoke alloy wheels, and more closely resemble the Ferrari Daytona. Even the Corvette-sourced windshield mimics the Ferrari. The car will fool the eye whether the black fabric top is stowed or fully deployed. Newer BFGoodrich gforce® performance tires are mounted.

The condition of the car's interior is likewise impressive. Visual cues include the Ferrarri-emblem steering wheel, styled door trim in leather with fabric inserts, similar trim on the bucket seats with red Ferrari prancing-horse emblems embroidered in the headrests, analog instrument panel (with added Sniper® EFI digital instrumentation), and classic circular center (and dash-top) vents all fulfill the illusion. The simply designed console includes both audio (Delco® unit from the C3 Corvette) and GM-type HVAC controls as well as the shift lever for the automatic transmission, and the emergency brake handle.

Under the hood, there is no attempt to hide the Chevrolet-performance origin of the 350 cubic-inch V8: Chevrolet logo valve polished covers tell the story. The engine bay is very clean, complete, and well laid-out; air conditioning is still installed. The valve covers, chrome air cleaner, and other shiny engine bits add to the presentation. Hoses and wiring are properly routed. Viewed from below, the Corvette chassis is undamaged and complete, with the twin full-length exhaust pipes with their turned-up rear exit stealing the show.

While the more than 145 high-definition photographs and the short walk-around-and-startup video available on the GarageKeptMotors website showcase this Ferrari 365 GTS/4 Daytona Tribute in detail from every angle, including from below, we expect and encourage in-person inspections at our Grand Rapids, Michigan showroom. Please call to arrange an appointment in advance as our showroom is not open to the public. And feel free to get in touch anytime by phone or email if you have questions.

The car's a guaranteed star attraction at any cars-and-coffee get-together. And when any snobbish Ferrari-owner snob whines, “It's not a real Daytona,” the easy response is, “True, but has yours ever had Crockett and Tubbs at the wheel?”