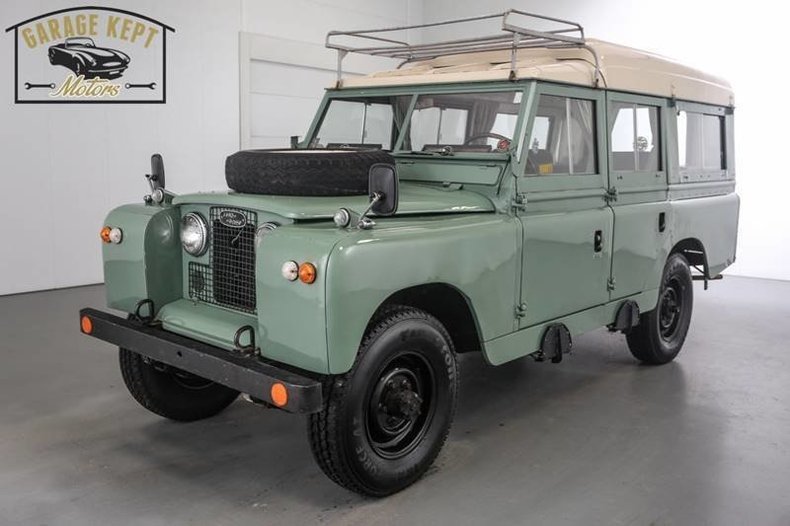 Westfalia, eat your heart out! Offered here for sale is “The World's Most Versatile Vehicle.” This 1966 English Land Rover Dormobile is a documented two-owner vehicle and remains in excellent condition. This 109 Long Wheelbase Safari Camper Wagon was built by Martin Walter Ltd. in Folkestone, England, and although production numbers were lost, it is believed that less than 1,000 of these Dormobiles were produced. The rarity and nostalgia factors are off the charts. It truly is a versatile machine with an incredible story.The truck is powered by the original 2.4L 4-Cylinder engine mated to a 4-speed manual transmission with overdrive. Combined with the high/low transfer case, the overdrive allows 16 forward and 4 reverse gears for conquering any and all terrain. The chassis is a heavy steel box frame with heavy-duty leaf springs wrapped in a full aluminum body so the panels will not rust. The seats and below window panels are clad in imported Italian leather. Paneling from window line and above including ceiling is top quality yacht interior vinyl. The camper top is made of fiberglass (original) and PVC (original) canopy tent. Two sleeping cots unfold when tent is up. The front and rear seats fold flat to convert into beds, either as two separate or one full size unit. Passenger seat flips around to provide seating for dining with table mounting between front and back seats. Two-burner propane stove is stored in rear driver side metal cabinet with neighboring dry sink. All the essentials in one reliable land-covering “dormitory.”The vehicle on its own is awesome, but the story that accompanies it may be even cooler. The first owner, Herbert S. Veltmen, was born in 1894 and was a native to Grand Rapids, Michigan. A notorious world-traveler and big game hunter, Veltmen ordered this car new from the Land Rover factory at the ripe age of 72! He flew to England to pick it up and then drove the car through Europe and into Africa for its first Safari hunt, but not its last. In the following decade, this Dormobile traveled back to the U.S. and then back to Africa, Costa Rica, Canada, Alaska, and more as Veltmen chased wild game with friends and family. Finally, on a trip to Mexico, he had to hire a driver to commission the vehicle back home due to wavering health conditions. In 1977, at the age of 81, he sold the camper wagon to our client. Also a local Grand Rapids resident and the proud designer of the Steelcase 9000 Series office furniture, he used the vehicle for more hunting and camping trips in the following ten years.In 1987, after a Land Rover gathering on the U.S. East Coast, our client dropped the Dormobile off at Rovers North of Vermont, the legendary Land Rover gurus. They completely overhauled the vehicle at no expense spared, which included replacing the beat Rhino naugahyde with top quality Italian leather. All mechanicals were also gone through. The speedometer had stopped working so a new one was installed, resetting the odometer. What the clock reads now, 3,225 miles, is all the miles put on since 1987. In 1993, the car was repainted the original factory green. Before our client retired, the car was a daily commuter to his job at Steelcase and then Herman Miller. In the 2000's, the vehicle was driven less but always started and serviced every year at Swanson's Auto Service Center just down the road from his house in Grandville, MI. It starts on command and runs like a top (see video). New wheels and tires were the latest addition and have less than 100 miles on them. Due to health issues of his own, it is now time to let the wondrous Dormobile go to a new owner.It also comes with a closet full of extras, such as the original wheels and tires, all original books, owner's manuals, shop manuals in several different languages, original brochures, aluminum storage chest that mounts on roof rack, folding table, extra paint, win