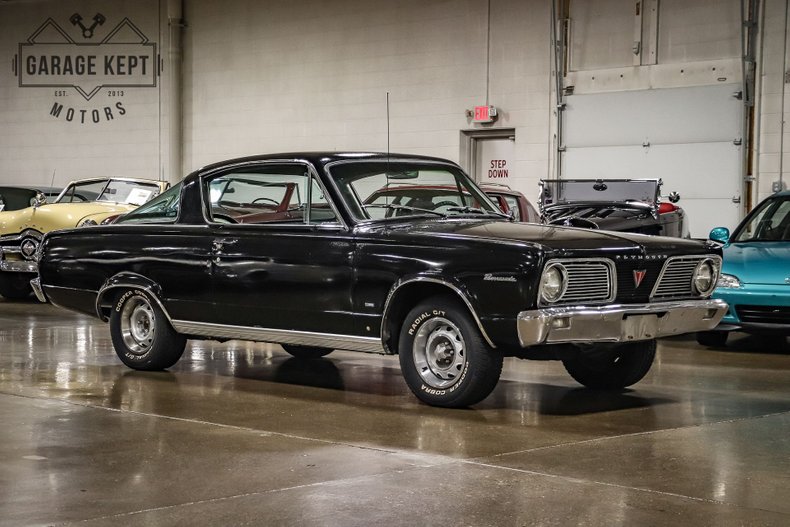 (Please note: If you happen to be viewing this 1966 Plymouth Barracuda Fastback on a website other than our Garage Kept Motors site, it's possible that you've only seen some of our many photographs of the car due to third-party website limitations. To be sure you access all the more than 150 photographs, as well as a short start-up and walk-around video, please go to our main website: Garage Kept Motors.)

Some history on this model from the Early Valiant and Barracuda Club (EVBC) website: “The Plymouth Barracuda was launched in early 1964, two weeks before the Ford Mustang. Officially called the Valiant Barracuda, the car was based on the compact Valiant and kept its lower body but used a fastback super-structure with a massive wraparound backlight (the largest single piece of glass ever put on a production car) and stubby trunk lid. The interior featured the Signet's bucket-seats, plus a flip-down rear seatback and security panel for carrying long items.” And specifically on the '66 model introduction: “The Barracuda received a facelift in 1966 (and) received its own grill and exterior design. Distinct Barracuda 'fish' emblems were added, which would remain until 1970.”

Offered here in survivor condition is a 1966 Barracuda (one of 38,029 manufactured) in black over black (with green trim). The car has been well cared for with minimal modifications for performance and convenience added over time. The 'Cuda currently shows 74,305 miles on its odometer, a remarkably low 1,400 miles per-year on average since new.

The car's body is free of dents, dings, or damage. Overall paint quality is good with patina notably on the fastback roof, hood, and rear deck. Chrome bumpers are in very good condition; chrome body trim—including the design element on the rear deck and door handles—shows patina from age. Glass—including the rear window, the largest single piece of glass on a production car at the time—is in excellent condition, clear and undamaged; lighting lenses across the car are similarly pristine. “Plymouth” badging—rendered in individual letters front and rear, and script on the front fenders—remains in place. The split front grille still has the “V” logo-badge referencing the car's “Valiant” heritage. Original sport-design steel wheels (optioned from the factory) are mounted with Cooper Cobra® Radial raised-white-letter GT tires. The car's original owner's manual is included in the sale

Inside, the color theme is black with light-green-metallic lower dash and upper door and side-cabin trim. Upholstery on the front bucket and foldable rear bench (“comfortable seating for five,” the ads at the time noted) is black vinyl in a classic, vertically pleated design; seating-surface condition is excellent throughout. Cabin carpeting (also in excellent condition) is black and continues through the cargo area under the rear glass (the same carpeting graces the separate rear trunk area). Door trim incorporates the previously mentioned light-green metal and black vinyl as well as a script “Barracuda” emblem; windows are crank-operated (vent windows are pull-type). The car's original steering wheel (with leather-wrapped rim) frames the instrument cluster (with 120-mph speedometer and vacuum gauge as well as smaller fuel, engine temperature, oil pressure, and battery-charging status indicators) surrounded by brushed-metal trim mounted on the light-green metal. A later-model AM/FM/cassette tape player has been installed in the factory radio location. Patina and some surface deterioration are present on some dashboard surfaces. Factory air-conditioning vents are mounted below the dash. The automatic-transmission shifter is located on the center console, which includes handsome, burled- woodgrain trim.

Under the hood, the car's original 273-horsepower V8 has been dressed up with silver engine-block paint, Edelbrock-branded cast valve-covers, and chrome air cleaner. The engine bay is clean, complete, and well-organized. Viewed from below, the Barracuda's chassis is undamaged and complete. Engine exhaust is split into dual-exhaust pipes with added performance mufflers. Expected surface rust is present on untreated metal, but no body rust is indicated.

While the more than 150 high-definition photographs and the short walk-around-and-startup video available on the GarageKeptMotors website showcase this '66 Barracuda in detail from every angle, including from below, we expect and encourage in-person inspections at our Grand Rapids, Michigan showroom. Please call to arrange an appointment in advance as our showroom is not open to the public. And feel free to get in touch anytime by phone or email if you have questions.

MOPAR fans are a dedicated breed, and within that group there are arguably even-more-dedicated fans of specific models. The “early Barracuda” crowd is especially fervent. In fact, we're pretty sure one of them is reading this right now and envisioning this black '66 'Cuda in their own garage.