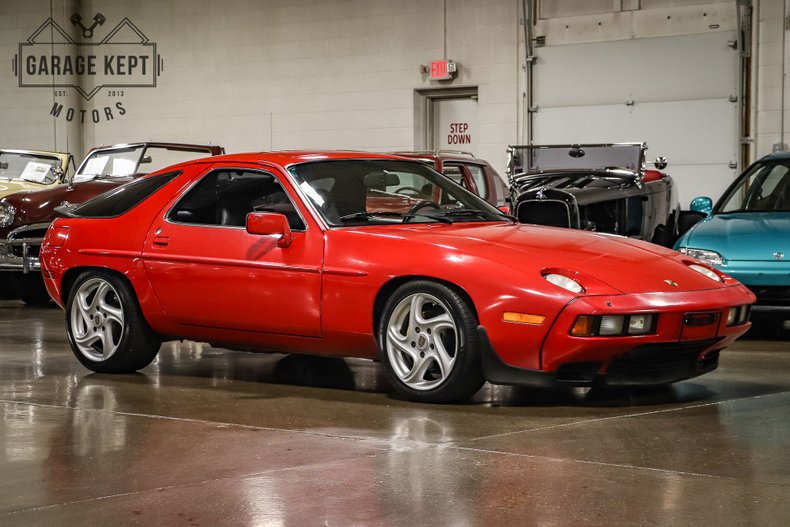 (Please note: If you happen to be viewing this 1985 Porsche 928 S on a website other than our Garage Kept Motors site, it's possible that you've only seen some of our many photographs of the car due to third-party website limitations. To be sure you access all the more than 165 photographs, as well as a short start-up and walk-around video, and a link to the Porsche's accident-and-damage-free Carfax history report, please go to our main website: Garage Kept Motors.)

To say the least, Car and Driver's Csaba Csere loved the then-new 928S: “By the speediness criterion, the 1985 Porsche 928S is a substantial improvement over its predecessor. Top speed is up 10 mph, to 154. Our five-speed test car rocket­ed from a standing start to 60 mph in 5.7 seconds and hit 100 mph less than eight seconds later; the old car required 6.2 and 17.8 seconds, respectively. And the new model burned through the standing quar­ter-mile in 14.0 seconds at 102 mph, com­pared with 14.7 seconds at 94 mph for last year's 928. We also tested the automatic version, and its performance is similarly improved. The automatic's 0-to-60 and quarter-mile times now match those of last year's five-speed, and its top speed is up 10 mph, to 152."

He went on to praise virtually every aspect of the 928S and concluded: “Thus the new 928 has the satisfying and uncanny combination of straight-line stability and instant responsiveness that we've come to relish over the years. In everyday driving, its suspension does a nice job of communicating pertinent tire-to-road information while blocking the transmittal of most pavement imperfections. When the road gets seriously twisty, the 928S seems to become smaller and lighter on its feet. It's supremely controllable with either the steering or the throttle in hard corners and any decent driver can use its impressive 0.83-g grip with confidence and safety.”

Originally believed by many (although debated by 928 aficionados) to have been developed as a replacement for the Porsche 911, the 928 debuted in 1978 as the fastest naturally aspirated production vehicle in the world. Over the model's 18-year run, the 928 went on to “automotive legend” status. As one magazine writer put it: “Even today, it invokes many oohs and aaahs when one rolls through town. And it served as a poster child for many people's dream car, particularly for those who grew up in the 1980s.”

Offered here is a 1985 928 S in “Indischrot” red (G8) single-stage paint (a shade very close to, and sometimes confused with Porsche's Guards red-G1) over black leather interior. The is a solid, driver-quality example of the autobahn luxury grand-tourer. Over its life, the car has been owned in several states. Its odometer currently shows 120,484 miles, which if accurate, would put the average per-year mileage at a very conservative under-3,350 miles. However, the car carries a “branded title” identifying a “mileage discrepancy” noted in 2005. This was likely due to an odometer whose internal gears failed, a common occurrence on this and some other Porsche models such that mileage “gaps” appeared when a replacement odometer was installed, or the offending gears replaced. The car was reportedly owned from 2008 to 2018 by a PCA member and IMSA driver. Most important, the overall condition of the car is consistent with a well-maintained 928, and the sheaf of maintenance documents that accompany the car bears that out.

Outside, the G8/Indischrot red paint is uniform with a good shine and some patina from age. Stone chips are noted on both outside “flag-style” rearview mirrors and on door edges. There is also a chip on the forward edge of the left-front fender wheel arch. Emblems—including the Porsche crest on the hood and “Porsche” logo molded into the rear bumper cap--are present and properly located. The metal sunroof is undamaged. Both front and rear bumper areas and spoilers are also undamaged. Cabin glass and lighting lenses are free of cracks or other damage. Pop-up headlights operate as they should. ATP® 5-spoke, 17-inch, twist-design wheels include colored Porsche center caps and are mounted with Kumho Ecsta® 225-45 ZR/17 94W front, and 255-40 rear performance tires.

Inside, the condition of the black leather, black carpeting, and switchgear (including the console-mounted automatic-transmission shifter with replacement shift knob) is uniformly very good with normal wear. Too many 928 cars left exposed to the sun are seen with badly degraded leather and trim. In particular here, the surfaces on the bespoke 928 bucket seats (front power) show no damage or signs of abuse. Leather-trimmed door panels are also in excellent condition, as are the lower door-jamb “step-over” areas with the clear plastic “928” logo showing the red body paint beneath. Original graphic markings on the console-mounted switches (for windows, rear wiper, and sunroof) have been worn away from regular use. The retractable rear cargo cover (suspended from the upper cargo-area trim, and often missing) remains properly installed here. An upgraded Sony CD audio head unit is mounted in the factory-radio location. The dashboard appears to be free of cracks, and the 4-spoke Porsche “raised hub” steering wheel shows no significant wear. Classically Porsche, simple-but-informative instruments include a 165-mph speedometer, 6,000 rpm-redline tachometer, oil-pressure gauge, and alternator-output gauge, all analog.

Under the hood, the 5.0-liter aluminum-block, 32-valve, 288-horsepower V8 appears correct and complete. The air-intake pipes have been painted red. The remainder of the engine compartment is clean, tidy, and also appears complete. The are no indications of non-factory modifications. Photos of the car from below also show none of the sort of damage that can arise from abuse or track use. In particular, lower front painted body panel is free of scratches or other damage. Some light surface rust is noted on untreated metal. Body panels are free of rust (front fenders and hood are aluminum). The exhaust system is complete and properly installed and original, including the “pumpkin” muffler unique to the 928 cars. Exhaust pipes are not compressed as they might be from overly aggressive driving styles or track use. Some “weepage” is indicated from the rear transaxle.

While the more than 165 high-definition photographs and the short walk-around-and-startup video available on the GarageKeptMotors website showcase this Porsche 928 S in detail from every angle, including from below, we expect and encourage in-person inspections at our Grand Rapids, Michigan showroom. Please call to arrange an appointment in advance as our showroom is not open to the public. And feel free to get in touch anytime by phone or email if you have questions.

As to investing in a Porsche 928, Hemmings Motor News advised not long ago: “Overall, the 928 hasn't yet reached the stratosphere that a few 911 models leaped into during the past couple of years, nor even some more common, older versions of the rear-engined car have. However, the time to find a bargain 928 is running out. Overshadowed by the 911 when new, the fast GT car now takes its own place of honor among the Porsche faithful, and collectors are noticing.”