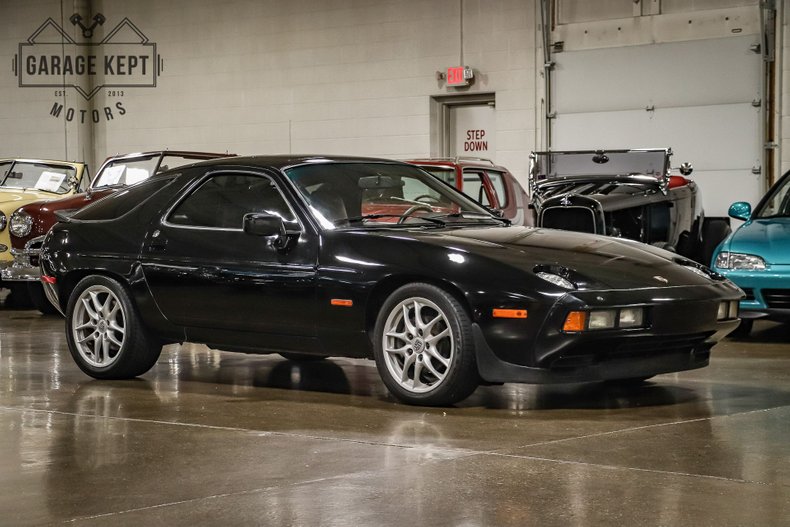 (Please note: If you happen to be viewing this 1986 Porsche 928S on a website other than our Garage Kept Motors site, it's possible that you've only seen some of our many photographs of the car due to third-party website limitations. To be sure you access all the more than 145 photographs, as well as a short start-up and walk-around video, and a link to the 928's Carfax history report, please go to our main website: Garage Kept Motors.)

“Black sheep,” indeed. Hold that thought, because offered here, in driver condition, is a black Porsche 928 with a story.

This car—shown on its title as a 1985 model, is in fact, an 85 Euro 928S, with 29 October 1984 build date. In December 2020, with 113,868 miles on its odometer (an average of just over 3,100 miles per year), the 928S suffered an engine fire in the Chicago area. It has since been repaired and upgraded with a modern ECU and fuel system, (see the Carfax history-report link). It should be noted that engine fires are not all uncommon with the Porsche 928 model, if fuel-injection lines were not properly upgraded. Importantly, this car was not involved in a body-damage traffic accident. Auction records show the car in its damaged state; the engine is covered with soot from the fire, but the body panels and interior are not fire-damaged. (These records are available online by pasting this link: https://autoauctionspot.com/porsche/928-s/1985-WP0ZZZ92ZFS840669.html ) The car still retains its original engine and all internal components, with upgrades due to engine fire.

As to its “Euro” authenticity: European-market Porsche 928 cars can be easily identified by their different equipment not installed on U.S.-bound cars. Euro cars have side-marker lights behind the front wheel (with a second set of U.S.-mandated lights near the front of the car added when the car was “federalized” for legal importation), rear-fender side-marker lights slightly angled, no rear rubber bumper guards, square high-intensity fog light on lower-left rear bumper (required by German law), and a headlight adjustment control alongside the driver's seat. This 928 has all these Euro distinctions, including and most importantly, 310HP verses the 234HP in the American version of this engine

With all the above noted, this Euro 928S has a good deal to offer the value-conscious Porsche shopper, not least of all the rich history of the model and the recent strong upward move in valuations. As noted by Hagerty: “When new… the 928 was an engineering tour de force. A yuppie-era status symbol that graced the big screen in Scarface, Weird Science and Risky Business. In recent years, enthusiasts and collectors have come around to the 928, and its stock has gone way up. It is a lot more expensive to buy than it used to be, but it remains a fast, comfortable, handsome GT.”

The car's exterior is straight with panel-fit tolerances characteristic of Zuffenhausen hand-assembly. The black paint (a partial re-spray in the original color) is uniform and retains excellent gloss overall; expected evidence of wear is present, as around the door handles. The rear impact bumper's indented “Porsche” lettering is rendered in silver. The attractive black spoilers front and rear, which made their first appearance on the Euro cars, are in excellent original condition. Black window trim—often seen as reverting to chrome due to extensive exposure to sunlight—retain their original finish here. Cabin glass—including on the rear-three-quarter beautifully curved windows—is clear and undamaged; the large rear-hatch window is undamaged, although new support struts (approximate cost: $40) will be needed. Lighting lenses are clear and uncracked, including on the bespoke pop-up headlights.

The car's interior features the lovely factory-optioned burgundy full-leather, again, in driver condition. Both front seats show wear-damage, the steering wheel shows wear from use, and the top of the dashboard is cracked, a common affliction on Porsche cars of the era. That said, the condition of many interior surfaces—including the face of the dash, leather trim panels on both doors, the instruments, rear jump seats, and carpeting throughout—is very good. An upgraded audio head unit with Bluetooth® capability is mounted in the factory-radio location. The shifter for the desirable 5-speed manual transmission is console-mounted, although the leather on the shift-knob shows damage from wear. Later-model Porsche wheels are mounted with fresh Bridgestone® Potenza SU2 performance tires.

Under the hood, the car's engine is the 4.7-liter, 16-valve, Porsche V8 with its characteristic and beloved “spider-design” Porsche-crest air intake. (Later models with the 32-valve engines sported different intake systems.) The intake has been refreshed here and is part of the car's original engine. The engine bay is clean and tidy with all components and wiring properly in place. The fan shroud shows minor evidence of superficial fire damage that would not affect performance. Viewed from below, the car's chassis is complete. There is no evidence of damage as might be the case from too-aggressive driving styles or track use. A replacement exhaust muffler is in place, and the under tray is in place. The car now sports a newer modernized fuel, and ignition system. These are driven by a Megasquirt 3- pro ecu. The Injectors are 24lb Porsche Cayenne v8 injectors, and are held in place by new billet fuel rails. The new ECU allows for full modern sequential injection and spark. With the assistance of a wideband O2 sensor, The MS3-pro can perfectly control the engine for better, cleaner power, and better fuel milage.

While the more than 145 high-definition photographs and the short walk-around-and-startup video available on the GarageKeptMotors website showcase this Porsche Euro 928S in detail from every angle, including from below, we expect and encourage in-person inspections at our Grand Rapids, Michigan showroom. Please call to arrange an appointment in advance as our showroom is not open to the public. And feel free to get in touch anytime by phone or email if you have questions.

“… a Grand Touring car 'par excellence' with vivid performance, even in automatic form, outstanding roadholding and handling, superb brakes... and a comfortable ride….” is how the U.K.'s MotorSport magazine described the 928. This Euro 928S is ready to show its next owner how much fun a “black sheep” can be.