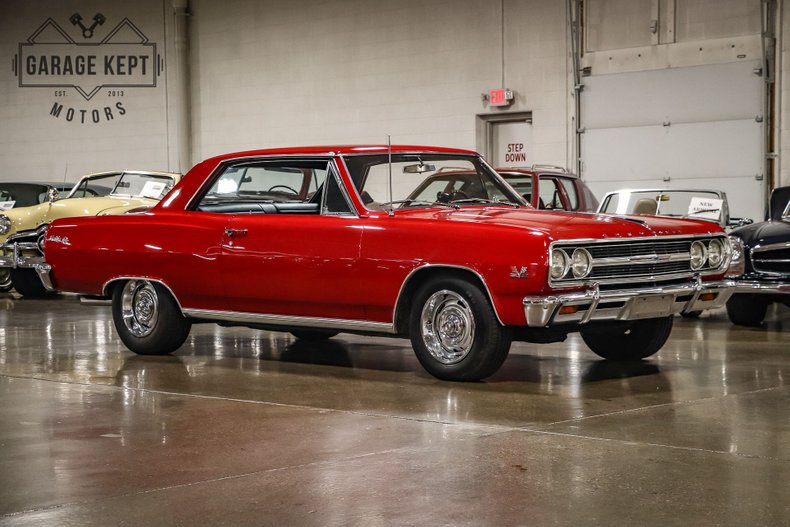 (Please note: If you happen to be viewing this 1965 Chevelle Malibu SS 396 Tribute on a website other than our Garage Kept Motors site, it's possible that you've only seen some of our many photographs of this car due to website limitations. To be sure you access all the more than 155 photographs, as well as a short start-up and walk-around video, please go to our main website: Garage Kept Motors.)

The Hemmings writers went on: “The Chevelle Malibu SS (later the Chevelle SS), has always been a darling among Chevrolet enthusiasts and enjoys a huge following from parts suppliers, specialist, etc. Prices for 1964-'65 Malibu Super Sports have remained stable over the last decade, making them approachable today.”

“For '65, Chevrolet added bigger doses of Super and Sport to the Malibu SS. A redesigned front end boasted an all-new anodized aluminum grille that was blacked out on the SS. A band around the also redesigned taillamps was blacked out as well, though on black cars, the band was painted silver. The rear cove molding was new, and the rearmost 'SS emblem was relocated from the upper right corner to the middle of the tail panel just to the right of a new Chevrolet logo. The wheel covers too received the Super Sport treatment with an add-on trim piece housing a diecast 'SS' badge.”

Less than well-known is the fact that a '65 Malibu SS could be had with one of two 6-cylinder engines. The beautiful red-over black Malibu SS offered here is a true “SS” that originally had one of the sixes under the hood. As a “396 SS” Tribute, the car has been up-engined beyond the 396 with a larger, present-day 454 cubic-inch V8 as part of a complete restoration completed just 3,000 miles back. Think of this Chevelle as an authentic SS… and then some.

The car's exterior red paint is the result of a professional's touch in the paint booth. Smooth, evenly glossy, with a deep shine, the finish is excellent. There are no flaws in the bodywork, no dings, no dents. Chrome bumpers and trim have also been perfectly restored. “Malibu SS” badging on the car's sides, and on the rear cove trim—as well as the individual-letter C-h-e-v-r-o-l-e-t on the hood—are accurate and properly positioned. Lighting lenses on the quad headlights and rear taillights are clear and free of cracks. “SS 396” emblems have been added to the front fenders. The wheels are stock steelies with chrome ”Chevrolet Motor Division” center caps and trim rings; BFGoodrich Radial T/A raised-white-letter tires are mounted blackwall-side-out.

The black interior faithfully re-creates the original even as it adds tasteful upgrades. The upholstery is leather, and the pattern is a simple horizontal pleat. Chrome trim on the front-seat edges, door panels, and on the dash is all in excellent condition. The brushed-metal instrument surround is an SS trademark. A bowtie-branded, wood-rim steering wheel frames the stock instruments (including speedometer and tachometer) with aftermarket engine-monitoring gauges added below the dash. The car has power steering and power brakes. The factory-original pushbutton AM radio remains mounted to the right of the instruments. The Chevelle's metal-trimmed console hosts the 4-speed manual transmission shifter (with the shift pattern layout also on the console surface, much as it was on the Corvettes of the time). Black carpeting and carpet mats cover the cabin floors. Audio speakers are incorporated in the doors and on the rear parcel shelf.

Under the hood, this “396” seems a good deal larger… because it is! This is a professionally built, 454 cubic-inch V8 featuring an MSD electronic ignition system, oil cooler, aluminum radiator (with electrically operated fans), custom valve covers and head... in all, a stunning powerplant in a perfectly clean and impressively put-together engine bay. (Be sure to sample the engine's music in the accompanying startup-and-walkround video. You'll want to watch it more than once.) Viewed from below, the star of the show is the masterfully created, custom 3-inch exhaust system featuring massive headers and full-length dual exhaust with “X” crossover. The chassis is perfectly clean and free of rust.

While the more than 155 high-definition photographs and the short walk-around-and-startup video available on the GarageKeptMotors website showcase this well thought-out and beautifully executed Malibu SS 396 Tribute in detail, we expect and encourage in-person inspections at our Grand Rapids, Michigan showroom. Please call to arrange an appointment in advance as our showroom is not open to the public. And feel free to get in touch anytime by phone or email if you have questions.

This really is a 1-of-1 396 SS Tribute… an improvement on the original that honors the marque without going over the top. We don't guarantee large gawking crowds around this Chevelle at cars-and-coffee gatherings, but the next owner shouldn't be surprised when they turn out to admire this exceptional build.