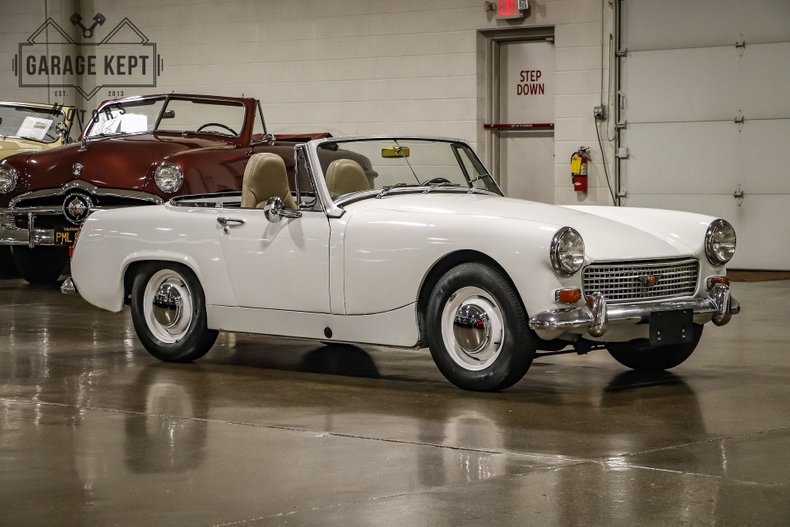 (Please note: If you happen to be viewing this 1969 Austin-Healey Sprite Mark IV on a site other than GarageKeptMotors.com, it's possible that you've only seen some of our many photographs of the car due to website limitations. To be sure you access all the more than 145 photographs, including a short walk-around-and-startup video, please go to our main website: GarageKeptMotors.)

“Austin-Healey's Sprite is… brilliant, and very much within reach” - Hagerty, April 2021

The people at Hagerty described the Austin-Healey's origins: “In the 1950s, as America's cars grew ever larger and chrome became the national color, Englishman Donald Healey saw an opportunity. He was convinced Americans, still glowing with postwar optimism, were ready to buy small British sports cars in real numbers. A partnership with Nash Motors in Wisconsin bore the Nash-Healey in 1951, and the following year, Donald Healey debuted his own Healey 100 at the British International Motor Show. Named for its top speed, the two-seat roadster caught the eye of Austin's chief, Leonard Lord, and a deal went down. The Donald Healey Motor Company Ltd. would be responsible for development and design, and Austin would handle production and sales.”

First launched in 1958, but after two model-series improvements, in 1966, the Sprite reached its most-developed form in the Mk IV. Hagerty noted the Mk IV debuted with the 65-hp, 1275-cc engine from the Mini Cooper. Sprites graced our shores until 1969. Offered here in white is one of those last-imported Mark IV Sprites, a 52-year-old survivor in largely original condition.

The sports car's exterior wears a driver-quality re-paint in pure-white (believed to be the car's factory color) over a chocolate-and-tan interior under a black vinyl hardtop. The paint's condition is very good overall, with good gloss and consistency across body panels. The first owner must not have popped for the optional wire wheels, so painted steel wheels with undecorated chrome center hubcaps do that job. The car's badges—the handsome Austin-Healey logo in the front grille and the simple-but-tasteful script “Sprite" on the rear deck—remain in good condition and properly mounted. The removable black-vinyl-covered hardtop extends the car's usability for cooler or inclement weather. Original chrome bumpers front and rear show well; lighting lenses and cabin glass are clear and free of cracks.

Inside, chocolate-colored door and lower-dash trim mixes with the black carpeting and dashboard. A Grant GT® sport steering wheel has been added; it frames an array of original Smiths instruments (and a replacement fuel gauge). The floor-mounter 4-speed manual transmission shifter wears an Austin-Healey logo. Added for a definite improvement in comfort, high-backed bucket seats in tan have been installed. The cargo compartment behind the seats is fully trimmed out, and the somewhat spartan trunk—home to the spare tire—is well-kept.

Under the hood, the car's original 1,275cc, inline 4-cylinder, Healey powerplant—still wearing its original factory color—is centermost in a clean and tidy engine bay. Replacement engine-air-supply ducting and hood insulation is in place. For those who might question how sporty the driving experience might be, Hagerty answered that question for the lesser Mark I Sprites: “You wouldn't think 48 horsepower, a 0–60 mph time of 20.8 seconds, and an 80-mph top speed would draw praise, but R&T was impressed by its 'surprisingly good performance.' Motor Trend's editors liked the Sprite's 'willing engine, which revved to 6000 rpm, and its tossability. 'Just the slightest trace of oversteer at high speeds helps break the rear end loose and the resulting slide is easily controlled. Exceptionally flat cornering lends a feeling of security.'” With nearly 25% more horsepower and a top speed of 100mph, the Mark IV Sprites delivered even more thrills. As they say, “driving a slow car fast” is the real test of the aspiring performance driver.

Viewed from below, the Sprite's chassis is complete. There are no indications of abusive driving style sorts of damage on the undercarriage.

The largely original, well-maintained condition of this '69 Austin-Healey Sprite Mark IV is shown from every angle—including from underneath—in the more than 145 high-definition photographs and the short walkaround-and-startup video link available at the GarageKeptMotors site. Of course, we also welcome and encourage in-person visits to our Grand Rapids, Michigan showroom to see the car up close. Since our showroom is not open to the public, we ask that you call or email us in advance to arrange an appointment so that we can devote our full attention to you and this Sprite. In the same spirit, feel free to contact us directly with any questions.

About these European automotive gems, Hagerty concluded: “Donald Healey was right: Americans did want small affordable British sports cars, and we still do. … any Sprite from the production range makes for a fun, cheap ride. That's as true then as it is now.” One fortunate prospect for this white sportscar is about to experience all that fun.