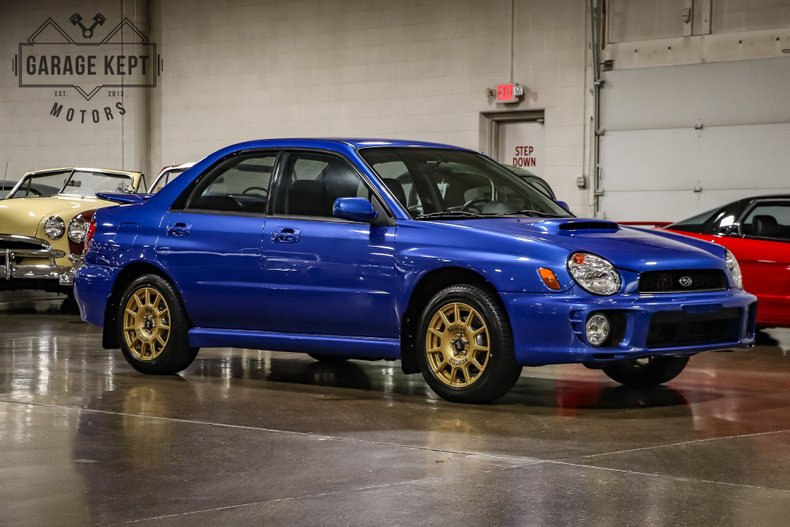 (Please note: If you happen to be viewing this 2002 Subaru Impreza WRX on a website other than our GarageKeptMotors site, it's possible that you've only seen some of our many photographs of this vehicle due to third-party website limitations. To be sure you access all the more than 175 photographs, a short walk-around-and-startup video, and a link to its Carfax report, please go to our main website: GarageKeptMotors.)

Car and Driver: “…the five-speed model we drove snicked through the gears with Honda-like crispness. When the turbo came up to full boil at about 3300 rpm, the drivetrain transferred the power to forward motion—and plenty of it—with no drama. Our calibrated butts agreed with Subaru's estimated 6.1-second 0-to-60 sprint, which should make the WRX quicker than the four-wheel-drive sedans offered by Audi and BMW.”

“The WRX's chassis felt tight, responsive, and solid. Subaru says that a host of structural improvements netted a whopping 148 percent improvement in torsional body rigidity over the last Impreza… our initial impression was one of surprising balance. On a dust-covered asphalt autocross course, we felt little of the traditional understeering plow. Rather, we could easily dial in a bit of oversteer to get the car to rotate. If, in fact, our early impressions hold, the WRX's willingness to rotate would put it among a cherished few road cars with active rear ends.”

Motor Trend (July 2001 Road Test): “…it'll make the guy in the Mustang next to you run to the dealership for a checkup after you outrun him zero to sixty in just 5.6 seconds. That's no typo.”

“… we managed to flog it around a racetrack, toss it through off-road dirt and snow courses (like World Rally Championship drivers do), and yes, even commute over city streets. Each test was an eye-opener. This car does it all, and does it well: It's quick and agile, gets great fuel mileage, seats five, and doesn't penalize your pocket for wanting it all, and getting it all, in one car.

Offered here is a very well-preserved and respectfully treated 2002 Subaru WRX in World Rally pearl blue over black. The car's odometer shows 136,400 miles, or roughly under 7,200 miles per-year on average, less than half what the industry considers normal annual mileage. Fortunately for its next owner, the car has not been subjected to overly enthusiastic modifications so it operates exactly as the manufacturer intended (as described in the automobile-magazine reviews above).

The car's exterior paint is in excellent condition overall, with even gloss across all painted surfaces, including the functional hood scoop, flared fenders, front air dam, rear-deck spoiler, and lower-body ground-effects trim pieces. Subaru is known for properly aligned body panels, and this car reflects the factory tolerances. All “Subaru” and “WRX” badging is properly in place. Headlights, rally-style fog lights, and tail lights are all functional, and their lenses are clear and un-cracked. Similarly, cabin glass is virtually perfect. Gold Sparco® 17-inch rally wheels are mounted with Sumitomo® PO2 all-season high-performance tires. Red-painted disc-brake calipers in all four positions can be seen through the wheels.

Inside, a black theme is interrupted with the upholstered fabric center inserts on all seating surfaces (including the very well-bolstered front buckets); the angled pattern features a touch of blue. Cabin floors are covered with black carpeting which has been well-protected with WeatherTech® mats at all four seat locations, valued as another indication of meticulous owner care. (The mats are included in the sale.) The black dash is simple and straightforward befitting a World Rallycross-inspired car. The “all business” Momo® steering wheel is standard from the factory. Full instrumentation includes the 170 mph speedometer and 7,000 rpm-redline tachometer. The center stack features an upgraded touchscreen head unit controlling the audio system including SiriusXM®. (Twin 10-inch subwoofer speakers are custom-mounted in the trunk.) Beneath the touchscreen on the upper center console are the HVAC controls; the short shifter for the 5-speed manual transmission is center-console-mounted.

Under the hood the dual-overhead-cam, 2.0-liter, turbocharged 4-cylinder engine (delivering a rated 227 horsepower at 6000 rpm) is centerstage in a well-maintained and very clean engine compartment. The air-to-air intercooler, fed with air via the hood scoop, sits atop the transverse-mounted powerplant. Select vacuum hoses have been upgraded to blue silicone for a nicely enhanced look. The car's data tag remains factory-mounted with rivets. Viewed from below, the chassis shows no damage; no flattened exhaust components due to overly aggressive driving styles or track use. Surface rust only is present on some untreated metal, but no body-panel rust. Factory suspension components and disc brakes are properly mounted.

The overall excellent condition of this Subaru Impreza WRX is faithfully presented in the more than 175 high-definition photographs, together with a short walk-around-and-startup video mentioned earlier, available at the GarageKeptMotors site. That said, there is no substitute for an in-person, up-close inspection. We encourage such inspections by interested parties at our Grand Rapids, Michigan showroom. We ask only that an appointment be made by phone or email in advance. Our showroom is not open to the public. We are happy to answer questions by way of phone or email.

There has indeed been an abundance of praise heaped on the Subaru Impreza WRX by the car-enthusiast magazines and legions of WRC fans. But sometimes the accolades with the fewest words, put it best. Motor Trend gets that honor concluding their extensive road test review: “Simply said, the WRX rocks.”