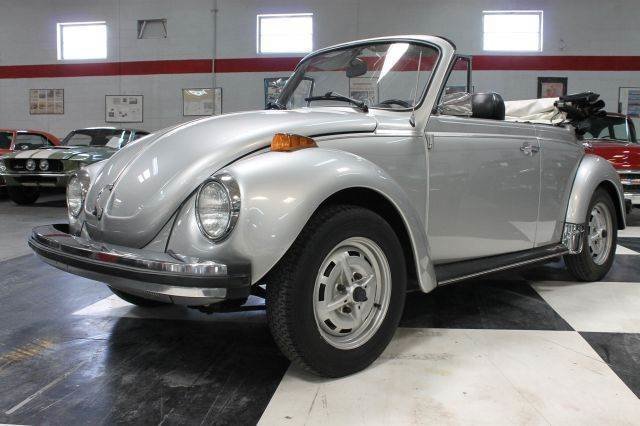 Ferdinand Porsche was given the task to design the Volkswagen in 1939. When World War II broke out, only 630 cars were produced before the factory was given to the German Air Force. Production was restarted in 1946 when the British Army ordered 10,000 VW's. The design changed only slightly over the years until 1972 when the changes were radical, including a curved windshield. It had a selling price of $1800. In 1972 the 15,000,034 beetle left the assembly line beating the record held by the Model T and became the most popular car in the world. In 1991, it was named the car of the century. In 1974, for the first time, Volkswagen lost money and announced the new VW, the Golf. Beetle manufacturing in Germany ended in 1974 but continued production in Mexico. However, Karmann, the company that built the convertible, continued production in Germany until January 1, 1980.This car is a 1979, the last model produced by Karmann. It was brought to Michigan in 2007 from Florida to be part of a classic car collection. It is only for sale due to a recent and severe medical condition of the present owner. It has always been a summer toy and has never seen snow. This Beetle has only traveled only 58,000 miles since new, remains pristine, and even the clock still works. The top is in perfect condition and is raised and lowered manually with minimal effort. The Hagerty valuation tool, which tracks actual sales show a number #1 car selling for as high as $32,000, a number 2 at $25,000 and number 3 at $15,00. They suggests an average value of $15,485. Sports Car Market price guide states its low value at $10,000 and high at $18,000. See more photos on dealer website: Garage Kept Motors LLC