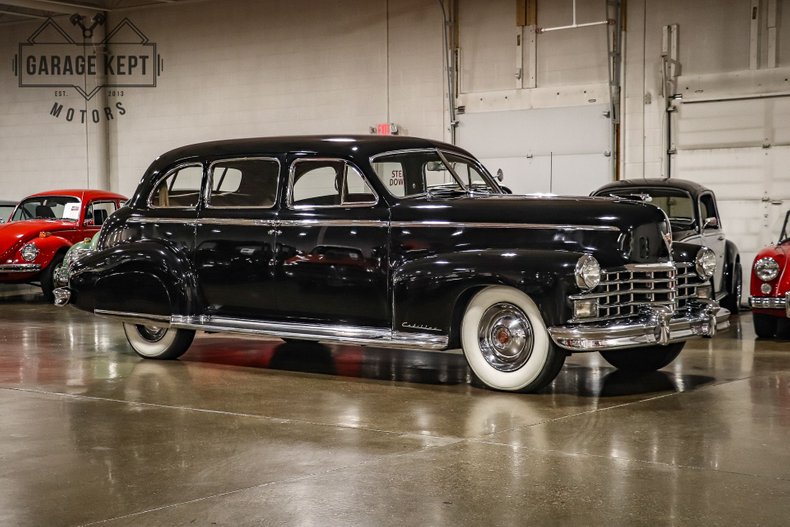 Featured in The Godfather

Hoping to park this stately Cadillac in your Garage? Make us an offer we can't refuse...and it could be yours. This car has a commanding presence and looks amazing rolling down the road. It is said that this car was used in the filming of the Godfather Movies, although we have no way to substantiate that. It is a fun rumor, and riding in this car does make you feel like a “boss”. Although we don't know for sure that the car was used in the Godfather movies, what we do know is that the first owner of the car was Glen Martin. Mr.Martin was an aviation pioneer whose company, after several mergers and acquisitions, is now known as Lockheed Martin. A black and white photo shown in our listing photo set is a photo of Mr.Martin, his mother Minta, and their driver next to this Cadillac and one of his planes.

This Cadillac is an elegant car that features curves, contours, and just the right amount of chrome trim. Penned by the late-great designer Harley Earl, this car has an amazing shape. Curves and contours flow to culminate in an elegant design. The chrome trim throughout the car really shows thanks to the contrasting black paint. The car has been repainted once, and it looks as if the repaint was completed quite some time ago. The paint is glossy and even throughout. There are a few small details on the exterior of the car that we noticed are showing some age - the running board rubber trim, the tail light lenses, and a few of the chrome pieces around the tail lights show some age. At any angle the car is pleasing to the eye, and small details like the Zeppelin airship-shaped bumperettes begin to catch your eye the more you admire the car.

Interior is interesting as the front compartment is a different color than the rear passenger area. Since there is a partition between the two, the two tone color scheme doesn't look too strange. The front seat area, including the headliner is finished in black. Power window switches that operate all the windows can be seen on the driver's side door. The glass partition between the front seat and rear passenger area is also a power window. Unlike many cars today, the wood trim and chrome trim is real metal and wood that have a beautiful finish. Symmetry on the black and chrome adorned dashboard is pleasing to the eyes. A pair of round instruments flank the large radio and speaker grille which features vertical chrome strips. A large diameter, ivory rimmed steering wheel which features a chrome horn ring matches the gearshift lever trim, and heater levers. The rear passenger area is finished in tan upholstery, which pairs well with the chrome and wood trim throughout. A pair of “jump-seats” are mounted at the base of the partition wall and are actually pretty comfortable for short trips. The large, cushy rear seat could double as a couch, and once seated there, an upholstered footrest is within reach. The interior is highly original and is in surprisingly good condition.

The 346ci V8 under the hood is actually the same engine that GM provided the US Military to power the M5 and M24 tanks. It's certainly up to the task of powering this big Cadillac down the road. The 4800 pounds that this car weighs, and its big presence makes it look as though it would be difficult to bring to a stop, but the car does have hydraulic assist brakes which are a welcome feature. Make some room in your garage for this beautiful, classic Cadillac, but first make us an offer we can't refuse.