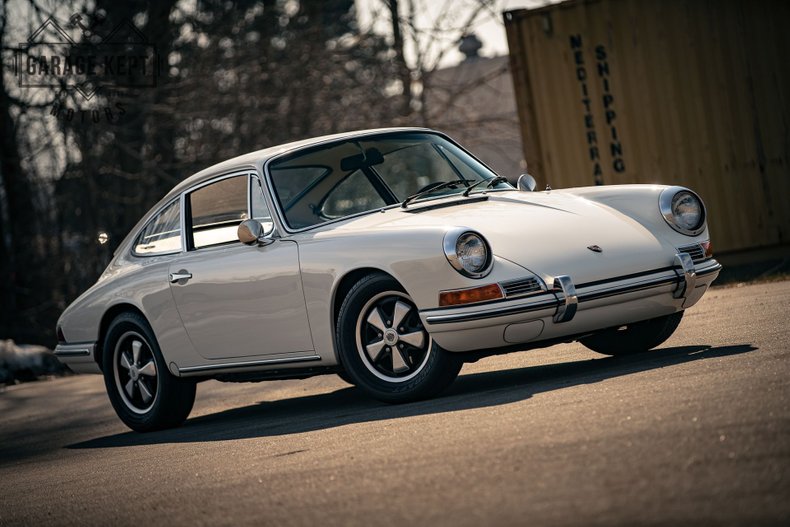 (Please note: If you happen to be viewing this 1968 Porsche 912 on a site other than GarageKeptMotors.com, it's possible that you've only seen some of our many photographs of this vehicle due to third-party website limitations. To be sure you access all the more than 125 high-definition photographs, including a short startup-and-walk-around video, please go to our main website: GarageKeptMotors.)

Porsche fans rightly praise the 911 model in its many variations as the brand's longest-running and most successful automobile. But many of these same fans have discovered that other Porsche models—particularly those with an interesting history of their own—make for desirable additions to their garages. The Porsche 912 is just such a model.

Porsche introduced the 912 for a simple economic reason: The price of the 911 in its 1964 launch year was more than 60% higher than the venerable Porsche 356 it was replacing. Porsche management feared this sort of increase might well dissuade 356 owners from making the jump to the new model. Enter the 912, essentially, a 911 with some equipment deleted and the engine of the 356.

As the Autoweek writer put it: “Indeed, the $4,700 912 was nearly indistinguishable in appearance from its better-performing stablemate. The 912 shared the 911's unibody chassis, independent suspension and overall dimensions. What set the 912 apart and allowed it to sell for $1,800 less than the 911 was its use of the 1582-cc, twin Solex carbureted central-cam engine from the 356. The 90-hp powerplant was proven and familiar to Porsche devotees. In Europe, where such things mattered even then, it also offered sensible fuel economy.” How'd that work out for Porsche? The 912 quickly outsold the 911 by a 2-to-1 margin.

After its manufacturing run ended in 1969, the 912 model began to be seen as something of a stepchild to the 911. Many 912s were allowed to decay or fall into serious disrepair. However, in the past five years or so, coming to appreciate the historic place the model holds, as well as its excellent driving dynamics, Porsche collectors have reversed their assessment, and the value of the 912 cars has risen dramatically. Because of the model's earlier “disposability,” finding solid 912s that were good candidates for restoration was a daunting challenge. As a result, collector demand vastly exceeded supply, and as always, prices reflected the disparity.

Offered here is a Porsche 912 from the next-to-final year of the model's short, five-year production run (not counting the one-year-only 912E model in 1976). The car has just emerged from a fully documented, open-checkbook restoration by the highly regarded Porsche experts at Euro Autowerks of Rockford, Michigan. The car's lineage, original equipment, and matching-number drivetrain is further documented by its accompanying Porsche Certificate of Authenticity.

The body wears the original-color Light Ivory (“hell Elfenbein”#6804) paint, one of Porsche's iconic colors going back to the 356 model. The subtle shade seems to perfectly suit the short-wheelbase "901" body style. The professionally applied finish is uniform and correct. All of the characteristic exterior details of the 912 model are properly in place, and in consistent, excellent condition across the Karmann-produced body. Chrome trim—on the front bumper, rear bumperettes, headlight bezels, window surrounds, mirrors, and door handles—is virtually perfect. The car features 15-inch period correct, polished Fuchs five-spoke wheels replace the original chrome wheel covers, and make it nearly impossible to distinguish the car from 911 models of the same vintage; the “912” rear-deck badge, however, is unmistakable to Porsche fans.

Inside, the factory-specified beige leatherette upholstery, textured door trim, and white headliner are beautifully restored. A 912-correct, four-spoke Porsche steering wheel (replacing the wood-rim version optioned from the factory) frames the 5-gauge dash. This instrument layout, introduced in the 1968 model year, matches the 911 model's look (earlier 912 cars had just three gauges). Brushed-metal trim runs the width of the dashboard with a single “912” badge facing the passenger. A period correct pushbutton AM-FM radio is installed in the factory location. Floors are covered with black carpeting and rubber matting, again matching the factory specification. The 4-speed manual transmission's floor-mounted shifter wears the Porsche emblem on the shifter knob.

The car's fully restored, rear-mounted 1.6-liter pushrod 4-cylinder engine (lighter than the 911 powerplant) is housed in an equally correct engine bay. (Be sure to sample the engine's exhaust note by watching the short video available at the GarageKeptMotors site.) Underneath, the car's chassis is free of damage, with suspension components wearing their original, unrestored finish, as most collectors desire.

All data plates and metal stampings (including the engine number) are in place and un-modified. Details of the car's $63,000 restoration are also included.

The exceptional, fully restored condition of this '68 Porsche 912 is faithfully presented from every angle (including from below) in the more than 125 high-definition photographs and the short walk-around-and-startup video available at the GarageKeptMotors site. That said, we always encourage in-person, up-close inspections by interested parties—or their representatives—at our Grand Rapids, Michigan showroom. We ask only that advance appointments be made by phone or email so that we can devote our full attention to our visitors and this very special Porsche. Our showroom is not open to the public.

“Buy the best one you can afford” remains some of the best advice for any prospective classic-car purchaser. The next owner of this remarkable Porsche 912 is bound to appreciate that wisdom for many years to come.