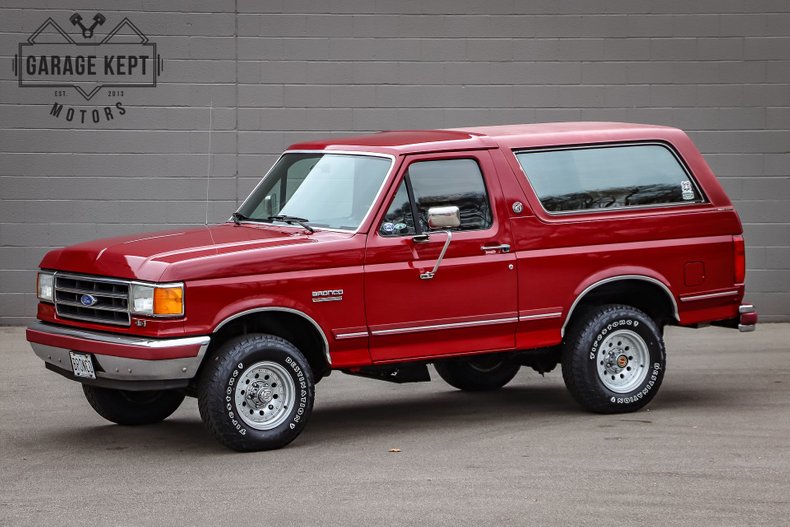 (Please note: If you happen to be viewing this 1991 Silver Anniversary Ford Bronco on a website other than our GarageKeptMotors site, it's possible that you've only seen some of our many photographs of this vehicle due to third-party website limitations. To be sure you access all the more than 180 photographs, a short walk-around-and-startup video, and a link to its accident-free Carfax report, please go to our main website: GarageKeptMotors.)

“For Broncos, we tend to celebrate the years ending in '6' and '1.'" - Ford marketing executive

The year was 1991, and the Ford Bronco, in its first 25 years, had gone from bare-bones utility vehicle, to a far more comfortable, but still highly capable, full-sized four-wheel-drive vehicle; a choice for outdoorsmen, ranchers, and probably a few urban cowboys. With just under 900,000 Broncos manufactured since 1966, the Ford brass decided they needed something special to commemorate the brand's remarkable 25-year history.

More than just an emblem (although there were handsome emblems mounted on the truck's b-pillars and dash), Silver Anniversary Broncos also featured unique, model-specific trim. For the first time ever, a full-leather interior was standard in a Bronco. Both front captain's-chair seats, the rear bench, and the door trim were covered in gray leather with tasteful accents of dark red. Exterior paint was non-metallic Currant red (Ford #M6325), again exclusive to the Anniversary Broncos. Bumper trim and “removable” (well, sort of… it weighs upwards of 600 pounds) fiberglass rear-area roof both wore the same Currant red color, as did the thicker, 22-ounce carpeting throughout the interior, including the cargo area. Silver Anniversary embroidered carpet mats protected the front carpeting with a full-width carpet mat in the second row. The rear cargo area was also carpeted. The spare tire was mounted on a swing-away rear carrier.

The 1991 Bronco offered here is a very well maintained survivor, one of the just 2,970 Silver Anniversary units as verified by its accompanying Deluxe Marti Report. Built on October 17, 1990 at the Dearborn, Michigan Ford truck plant (“Home of the Bronco” as noted on a window decal), and originally delivered to no-longer-in-business McFarland Ford-Mercury in Peebles, Ohio, its accident-free Carfax report shows long-term ownership in Florida and Michigan. With just over 107,000 total miles (or a very cobservative 3,500 miles per-year on average), the vehicle's overall condition is excellent. Interior surfaces show only light wear: no rips or signs of abuse on the leather; glass is clear with the only blemish being an older, very small, clear-epoxy-corrected stone chip in the windshield. Carpeting has been used, but cared for. Silver Anniversary-embroidered front carpet mats are in excellent condition. The exterior paint—the result of a professional re-spray in the factory color—shows beautifully with body panels showing no dents. The rear fiberglass roof shows some paint chipping and fading due to age; it was not re-sprayed. The engine bay is complete and unmodified; data tags are present in the correct locations. The undercarriage is similarly clean with the factory protective skid plates over the engine, transfer case, and gas tank all original and undamaged. There is only light surface rust on untreated chassis components, but no sign of under-body panel rust or rust repair.

The truck is freshly serviced including a tune-up (points, plugs, distributor, fuel filter), recent oil and filter change, all fluids including automatic-transmission fluid topped off, antifreeze freshened (coolant protection to -35°), new front brake pads and rotors (verified by Tirerack inspection), and a front-end alignment. Air conditioning blows very cold. Aluminum wheels are free of curb rash and Firestone A/T2 on-road/off-road tires (2020 manufactured dates) sourced from, and installed by Tirerack, are mounted. An updated audio head unit, a replacement Bronco-branded spare-tire cover, and the deleted brushed-aluminum tailgate trim are the only notable variations from stock. The front plate is a Ford-licensed replica.

The excellent, survivor condition of this full-size Bronco is faithfully presented in the more than 170 high-definition photographs together with a short walk-around-and-startup video available at the GarageKeptMotors site. That said, we always encourage in-person, up-close inspections by interested parties at our Grand Rapids, Michigan showroom. We ask only that an appointment be made by phone or email in advance. Our showroom is not open to the public.

Included in this sale are the Deluxe Marti Report mentioned earlier, records from recent servicing, a 1991 Ford Bronco sales brochure (which included the Anniversary model), the owner's manual and its Silver Anniversary logo-embossed vinyl pouch, the Haynes Repair manual for 1991 Broncos, two sets of keys (one set is Silver-Anniversary-embossed) with logo key fobs, and a never-used Silver Anniversary analog wristwatch.

Ford is once again celebrating in a year ending in “1.” The company is re-connecting with its history and making news with the launch of the entirely new 2021 Bronco, 45 years after the first one. The 1991 Silver Anniversary edition on sale here is a rare chance to get hold of the full-size Bronco model that celebrated the nameplate's 25thyear… and get it in very well-maintained, survivor condition.