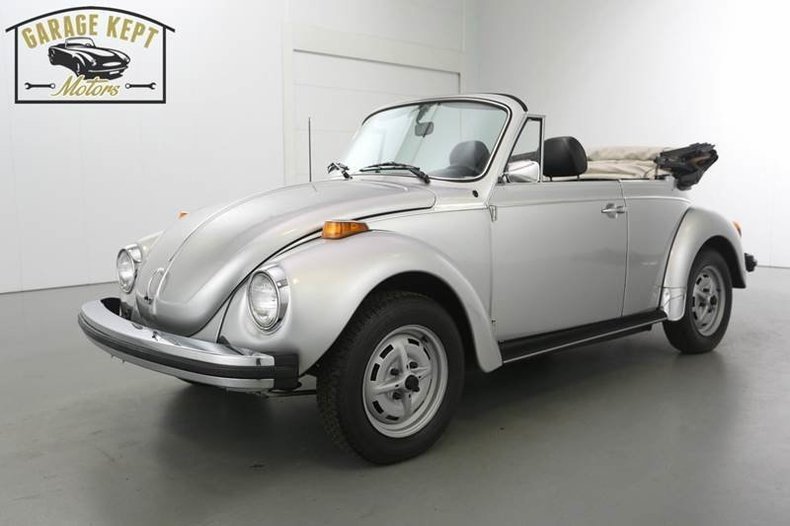 Yes, you read that right. This 1979 Volkswagen Super Beetle Convertible has just over 27,000 original miles. It has been one East Grand Rapids woman's pride and joy for the last 32 years. She knew the original owner and bought it in 1984 when she moved to West Michigan. She has maintained the car to the highest standard and did not degrade the cars originality in any way. It has always been serviced with Verburg's Automotive of Cascade, Michigan and comes with all records, books, manuals, original keys (two sets), spare tire with tool kit, car cover, convertible boot cover, front bra, and even a letter of authenticity from Volkswagen. The car is finished in the original Diamond Silver Metallic paint with a black soft top over a black interior. It is powered by the original numbers matching Air-Cooled, Fuel-Injected 1600 horizontally opposed four-cylinder engine mated to a 4-speed manual gearbox with rear-wheel drive. Small cosmetic upgrades have been done over the years, such as new seat covers and new tires, but always done to factory specifications. The car is truly a time capsule. It looks and drives like the day it rolled off the showroom floor. Everything functions as it should, even the analog clock. This is an incredible piece of Volkswagen heritage at a reasonable price.1979 marked the final year of Super Beetle Convertibles; however, due to the demand in the U.S., Volkswagen continued orders into 1980. The final Super Beetle Convertibles went for $6,800, which was a huge jump from their 1971 debut price of $2,249 MSRP. This solidified the Super Beetle Convertible as a collector car and made the 1979 Super Beetle Convertible the most desirable model year. It truly marked the end of the air-cooled Beetle era. Volkswagen sold 10,681 Super Beetle Convertibles in the 1979. The final Karmann-built soft-top “bug” came off the line on January 10, 1980 and went to the Volkswagen museum in Wolfsburg. 1592000001 marked the starting serial number for the 1979 production year. This example, No. 1592007430, was the 7,430th Super Beetle produced for 1979 and it rolled off the line on October 18, 1978. It was delivered to Gezon Volkswagen of Grand Rapids, MI and has stayed here in West Michigan, always garage-kept, ever since. Call or e-mail if interested. Thank you for looking.