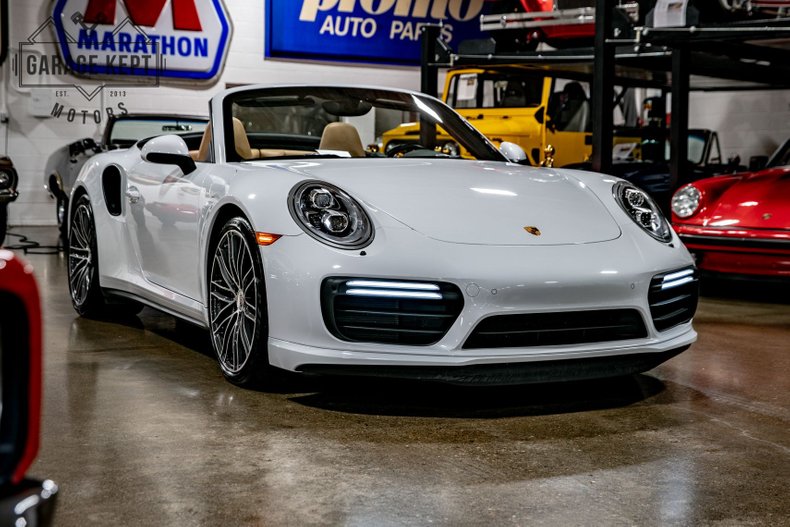 (Please note: If you happen to be viewing this 2017 Porsche 911 Turbo Cabriolet on a website other than our Garage Kept Motors site, it's possible that you've seen only some of our many photographs of this vehicle due to third-party website limitations. To be sure you access all the more than 180 photographs, a short walk-around-and-startup video, and a link to its low-mileage, one-owner, accident-free Carfax report, please go to our main website: GarageKeptMotors.)

The test drivers at Automobile magazine continued: “The second-generation 991-series Porsche 911 Turbo is now long removed from its brutishly boosted ancestors, and updates are focused on refinement and incremental performance gains. Beyond the subtle styling tweaks, Turbo and Turbo S models each gain 20 horsepower, bringing the total equine count to 540 hp and 580 hp, respectively. Zero to 60 mph now requires as little as 2.8 seconds, a tenth of a click quicker than before. Top speeds climb to 198 mph and 205 mph, the latter being the first time a factory Turbo surpasses the double century mark.”

So what's it like to pilot this car? “... the speed was so addictive and confidence-inspiring, we thought nothing of our accumulating velocity until we looked down and saw an indicated 150 mph on the speedo during a particularly open stretch of highway. Hard braking revealed plenty of caliper-grasping power from the six-piston front monoblocs. And thanks to the automatically decoupling anti-roll bars, the ride was impressively supple over the bumpy stuff, though rough surfaces transmitted a bit of road noise into the cabin.”

Offered here is a very low-mileage, one-owner, meticulously kept Porsche 911 Turbo Cabriolet in classic white-over tan, ready for its second owner. From a condition standpoint, with its mere 12,000 miles of use, “as new” is as good a description as any. This is a pampered, indeed loved, example of a magnificent Porsche model.

The car's exterior white paint retains its factory finish and gloss across every body panel, from the bottom of the front valance and its low front spoiler, across the athletic, almost sensuous body lines, to the top of the rear-deck-mounted spoiler. Lighting lenses, cabin glass, badges and emblems, 20-inch, 10-spoke Turbo wheels and Pirelli performance tires are all virtually flawless with no signs of wear or other faults, much less any abuse.

Inside, the tan leather upholstery, tan-and-black dashboard (with tan deviated stitching across the leather dash) and door trim, brushed-metal accents, and instrumentation are both attractive and free of almost any sign of use. The car's sport steering wheel (with adjacent suspension-setting selector) appears almost never to have been touched. The same is true for the dash-mounted sport chronograph clock and lap timer, and the console-mounted PDK automatic shifter. Every surface—including on controls and other switchgear—is free of wear. The car's black-fabric power-deployed convertible top shows no wear. The front trunk is spotless appearing never to have hardly ever been opened, much less used. The rear engine compartment houses the 3.6-liter, twin-turbocharger, horizontal 6-cylinder engine, but as with all modern Porsche, few components are visible. (As to “like new,” the “Turbo” badge in the engine compartment still wears its factory-applied plastic protective coating!) Underneath the car, there is a total absence of wear; in fact even finding a scratch is nearly impossible.

The absolutely pristine condition of this beautiful '17 911 Turbo Cabriolet is faithfully presented from every angle (including from below) in the more than 180 high-definition photographs, the short walk-around-and-startup video, and the link to its one-owner, accident-free, low-mileage Carfax report, all available at the GarageKeptMotors site. That said, we always encourage in-person, up-close inspections by interested parties at our Grand Rapids, Michigan showroom. We ask only that advance appointments be made by phone or email so that we can devote our full attention to our visitors and this remarkable 911 Turbo.

Automobile magazine's final take on the 2017 911 Turbo? “If judged by outright speed and pavement gobbling capability alone, the 911 Turbo achieves its greatness through its supreme usability and approachability -- precisely the opposite qualities that earned it a fearsome reputation decades ago.”