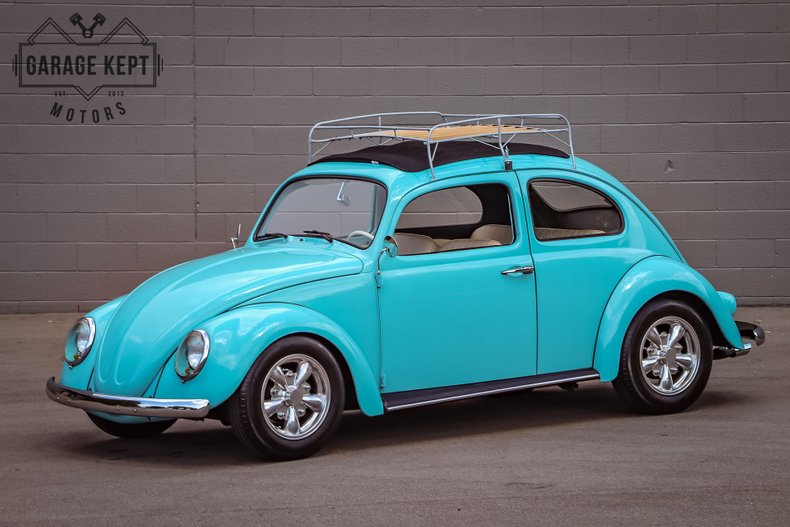 (Please note: If you happen to be viewing this 1961 VW Beetle 1600 on a website other than our Garage Kept Motors site, it's possible that you've only seen some of our many photographs of this vehicle due to third-party website limitations. To be sure you access all the more than 165 photographs, as well as a short walk-around-and-startup video, please go to our main website: GarageKeptMotors.)

Touting its revolutionary decision not to dramatically change a model's look just to introduce a different-appearing version every fall, Volkswagen instead touted how frequently the company made improvements to the cars throughout the year: “People sometimes ask us why we don't change our cars once a year like everybody else. The answer is simple: once a year isn't always enough.”

The VW Beetle's extremely long-lived styling is part of what makes the early models still in demand nearly sixty years after they first came ashore in the U.S. Purity of the design, simplicity of the engineering, and plain old nostalgia seemingly ensure demand for these classic German automobiles will never die out. Properly maintained, the cars are not only timeless, they're seemingly eternal!

This light-blue (we're tempted to call it “Pacific blue” since the car has a definite California vibe) '61 Beetle is a good example. It has been carefully maintained, completely restored, responsibly updated, and lovingly cared for. (Be sure to note the final photograph in the gallery showing the binder of photographs fully documenting the restoration.) It's still powered by the original 1200cc horizontal 4-cylinder rear-mounted engine, but together with the clutch, the powerplant underwent a documented rebuild just a few months ago (included: valves, pistons, bearings, camshaft, clutch, and electric fuel pump). One look at the engine compartment—either from behind or underneath—shows just how high a standard guided that work. New brakes were also installed.

The car's exterior shows the California influence in the addition of a wood-slat, rooftop cargo carrier, Empi “911” style wheels (preferred by many West Coast VW fans back in the day), and even a Ron Jon Surf Shop rear-window decal. The blue finish is uniform and glossy throughout, with chrome trim, lighting lenses, and window glass all in excellent, un-damaged condition. The quad-exit after-market exhaust is another West Coast-inspired modification. The black fabric on the factory “ragtop” manual sunroof fits properly and the top operates as it should.

Inside, the characteristically simple dash, painted in the body color, features a full range of new gauges executed in a period style. Ivory-colored vinyl upholstery (on seats and door cards) is in exceptional condition, free of wear or blemishes. The 4-speed manual shifter knob is a Gene Berg replacement t-handle. A JVC audio head unit and speakers are installed. The original VW Wolfsburg (celebrating the northern German city of its manufacture) steering-wheel-center emblem is crisp and undamaged. Carpeting and floor mats show very little, if any, wear, and a matching-color headliner is in place, including on the manually operated sunroof. Inside the tidy and correct front trunk, there's a full-size spare adding a measure of frontal crash-protection.

We expect and invite in-person inspection of this beautifully restored, California-vibe 1961 VW Beetle 1600. Because our showroom is not open to the public, we ask only that you call or email us for an appointment in advance so that we can devote our full attention to you during your visit. Meanwhile, the more than 165 high-definition photographs of the car and the short walk-around-and-startup video on the GarageKeptMotors site faithfully represent the car's condition, but feel free to call or email with any questions.

When VW announced it would no longer produce the Beetle, the Baltimore Sun wistfully noted: “It was driven by college students low on cash, workers who liked how tough this little car was, amateur mechanics who could easily repair a Beetle motor... miners who could only rely on mules and Beetles to scale a mountain, and commuters who liked how easily the Beetle could negotiate big city traffic, among so many others. It also was ahead of its time.” How often does the opportunity come around to own such a remarkable piece of automotive history?