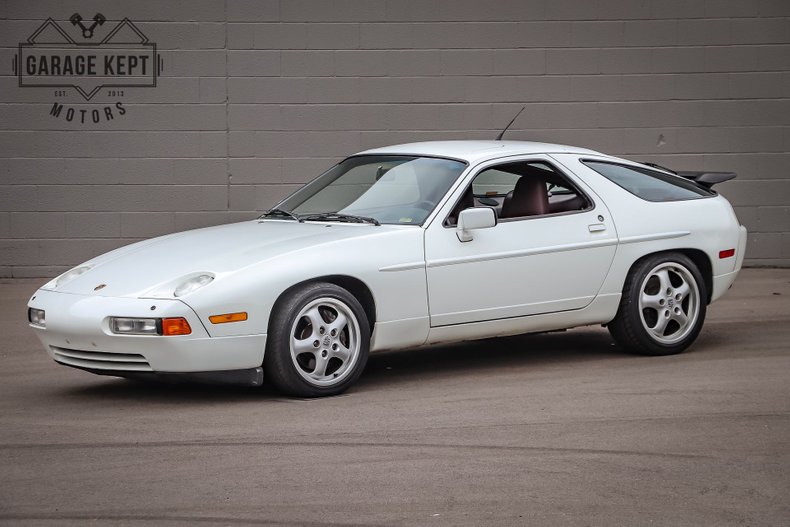 (Please note: If you happen to be viewing this 1989 Porsche 928 S4 on a website other than our Garage Kept Motors site, it's possible that you've only seen some of our many photographs of this vehicle due to website limitations. To be sure you access all the more than 150 photographs, as well as a short start-up and walk-around video, please go to our main website: Garage Kept Motors.)

“The 928 has always been one of the most deceptively efficient, fast, and safe cars of all time. The fourth major update, the S4, is all of that and more.” - Modern Motor, August 1989

With a top speed of 170 mph, "ultimate autobahn cruiser” was an accolade frequently rendered in favor of the Porsche 928 over its four major iterations in the course of the model's 17-year run (from 1978 launch through 1995). Partly with that grand touring use in mind, the majority of 928 cars came equipped with automatic transmissions. The "S4," introduced in 1987, was the identification for the fourth design iteration of the model, arguably the most consequential. An updated 5-liter water-cooled V8 engine with new pistons, a new cylinder head with more aggressive camshafts and larger valves, and a 10.0:1 compression ratio produced 316 horsepower. This power news was accompanied by redesigned bodywork in both the front (four fixed driving lights in addition to the pop-up headlights) and rear of the car (a new fixed spoiler and re-styled taillights) and ensured Porsche-o-philes could easily identify the new model. Handling continued as a surprising 928 strength and was described as “laser sharp” by Road & Track at the time. Although the 928 cars languished for many years in the collector market, that lapse has ended with values showing excellent appreciation over just the past few years.

Offered here is a well maintained 928 S4 in Porsche's very desirable Grand Prix white over burgundy. It has been primarily a southern car with prior ownership in Florida and Missouri. Something of a driver's 928, it was ordered with limited-slip differential. Its complete list of options from the factory-applied tag on the car is shown here:

Beginning with its burgundy leather interior, this 928 S4 shows beautifully overall, with one exception. Its dash has suffered cracking and surface distortion, so there is a dash cover in place. This should not be taken as a sign of mistreatment or owner neglect as nearly all of the 924, 944, and 928 front-engine/transaxle Porsches of the eighties suffered a similar fate. The cause was a “sandwiched” material used by the factory that did not stand up at all well to sunlight over time. Unfortunately, by the time the deterioration was noticed, it was too late for even the most fastidious owner to effectively mitigate. As the remainder of this car's interior demonstrates, virtually all other surfaces were up to Porsche's traditional high standards, and kept that way by the car's owners over the years. The burgundy leather is in excellent condition with no rips or tears, door trim is complete and undamaged, instrumentation and center-console switchgear is unmarred, and even the carpeting beneath the rear hatch-glass is un-faded. The headliner is free of sagging and the factory sunroof operates as intended. A later-model Alpine audio head unit replaces the factory-supplied Alpine unit. Rear-seat passengers are treated to a separate air-conditioning supply.

Grand Prix white is so valued by collectors in part because the color allows the other visual details of the car's design to stand out. For example, the revised lighting and safety lenses front and rear and the addition of the horizontal air-supply openings in the front lower valance (very definitely influenced by the legendary Porsche 959 supercar) get their fair due. The exterior surfaces on this car are in uniformly excellent condition with no sign of damage past or present. Even the side-protection applique strips are undamaged. The 17-inch “Cup” wheels are in excellent condition, and bespoke disc-brake calipers still display the legible “Porsche” lettering. In a nod to stealth, this 928 was not optioned with the model designation on the rear bumper cover (code 302).

The car's 138,000 miles (well under 5,000 miles per-year) are appropriate and reflect conservative, but consistent, use over its 31-year life. The engine compartment and undercarriage are tidy, but not overly detailed. There is expected surface rust on some chassis components, but no evident body rust. In a test-drive comparison conducted in 2000, the magazine 911 & Porsche World chose a similarly driven 928, and remarked: “… we opt(ed) for a smart 1991 S4, which is nicely run-in at 78,430 miles. This is no joke. Indeed, the 928 feels as solid as the day it left the factory. In fact, the engine might actually be at its peak. After all it's designed to do a quarter of a million miles between rebuilds (with regular servicing, of course).”

The assertion by Hagerty's Mike Musto some years ago that the 928 model is “… one of the greatest and most overlooked GT cars of all time” is only half-correct now. The next owner can expect this 928 S4 will not be overlooked by friends at cars-and-coffee gatherings. He or she can also expect to enjoy plenty of that “greatest GT” aspect of this fine automobile when they take it on the road.